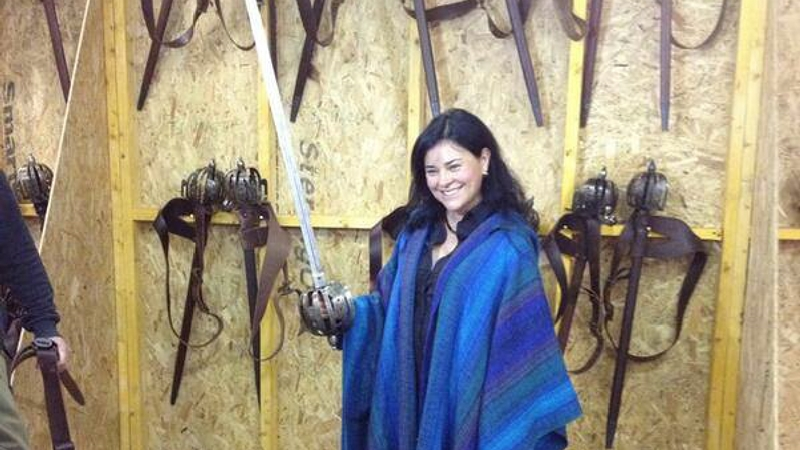 Diana Gabaldon, author of the "Outlander" books, on set during the filming of Season 1. MUST CREDIT: Courtesy of Diana Gabaldon

Best-selling author Diana Gabaldon hadn't even set foot in Scotland when she began the book that launched the popular Outlander series.

But she's made the country so attractive to readers - and to watchers of the Starz television program, which resumes with Season 5 on Sunday - that the Scottish government's tourism agency gave her an honorary Thistle Award for generating a flood of visitors to the fens, glens, jagged mountains and soft jade landscapes she so alluringly describes. According to numbers from VisitScotland, Outlander has increased tourism by an average of 67 percent at the sites mentioned in the books or used in filming.

Gabaldon, who is from Phoenix, wrote the first book and part of the second before traveling to Scotland. As a research professor pre-internet, she read exhaustively to craft indelible images of Scottish places for the "practice novel" she kept secret from her husband. When the unfinished draft sold in a three-book deal for a "staggering amount of money at the time," Gabaldon let her professorship lapse and headed to Scotland. Despite having no Scottish heritage, she says, "I remember seeing the green land rising and thinking, 'This feels like home.' " She and her husband parked at Carter Bar, where she posed for a photo in front of the England-Scotland border stone. This stone appears in Book 3, "Voyager," where the character Jamie says of it, "Looks like the sort of stone to last a while," according to fan Karen Henry, who blogs at Outlandish Observations.

If you long to visit after being exposed to the sweeping vistas and compelling history in the books and the show - for which Gabaldon, 68, is consultant and wrote several episodes - here are some spots to include on the itinerary.

Inverness: "It's called the heart of the Highlands," says Gabaldon of the city she names as her first recommendation, "and has reverberations through the third book and on into the rest of the series. It's where the entire clan system came to a screeching halt." In the show, however, Inverness is played by another city, Falkland.

Culloden Battlefield, five miles from Inverness: Here, the Jacobite rebellion ended in one hour of brutal bloodshed in 1746. "The Scots really didn't have a chance," says Judy Lowstuter, owner of Celtic Journeys travel company. After the loss to the English, Scots "were not permitted to speak Gaelic, and in the Highlands that's all they spoke. They wouldn't let them wear kilts or play bagpipes; the whole culture was extinguished."

A battlefield is a somber place to visit, but Hugh Allison, former property manager at Culloden who now owns Inverness Tours, says he's found a way to help U.S. visitors relate to the site. "You could make the argument that this is the battle that formed the United States of America," he says. Its repercussions emptied English and French treasuries, which meant England's King George III called for more taxes in the American colonies, "and we know where that went."

Like everyone I spoke with, Allison paid homage to the Outlander Effect. "Twice as many people were asking where the Fraser stone is. You have to think, either it's a very fertile clan and there are twice as many Frasers as there were last year, or something else has happened. Diana (Gabaldon) was that something else."

The Covenanter Hotel, Falkland, Fife: This serves as Mrs. Baird's B&B in the TV show, where Claire and Frank stay near Craigh na Dun. Gabaldon told me via email about a "busload of Spanish tourists from Barcelona who pulled up outside the hotel and streamed inside to check in, only to be told by the proprietress who had been watching out her upstairs window that I was outside. ... They fell upon me in a frenzy of affection, hugging and kissing me and carrying on about Jamie and Claire." Graeme Watson, who now co-owns the hotel with Ross Moonlight, says the hotel serves food all day so you have a reason to stop even if you can't stay overnight in the room decked out as Claire's. "It's got an Outlander theme, so there are tartans as the bedspreads, and a medicine bag in the room as a nod to Claire," he says. Steps from the front door, you'll want to Instagram yourself at the fountain where Jamie stood to look up at Claire in the window - a mystery for fans who can't figure out how he came to be there.

Falkland Palace, Falkland, Fife: This beautiful hunting palace has marvelous gardens and the oldest tennis court in Scotland, where Mary, Queen of Scots, and her father played. Besides serving as an apothecary in the show's "Hail Mary" episode, the palace appears in the inaugural episode if you know where to look for it, according to Allison. Claire peers in the window of the ironmonger (a term used until the 1970s in Scotland to mean "hardware store") at a blue vase. "Look over her shoulder and you'll see the gatehouse of Falkland Palace," Allison says.

Doune Castle, Doune, Perthshire: This medieval stronghold that plays Castle Leoch on TV conveys visible poignancy: Claire and Frank visit it in ruins in the show's "modern day" 1940s, and Claire returns when it is in its heyday. Visits to the castle have increased 227 percent since the Starz series debuted in 2014, according to a report called "The Outlander Effect & Tourism," commissioned by VisitScotland last year, the highest rise for the filming sites in the study.

Craigh na Dun: The circle of vertical stones, so necessary for time travel? It doesn't exist. "The standing stones that appeared in the television series are fake and are in the studio in Cumbernauld, near Glasgow. They're made of something like Styrofoam," reports Lowstuter. But dinna fash, Sassenach, you can still visit the hilltop where the menhirs were temporarily placed, at Kinloch Rannoch Moor in Perthshire, about 90 minutes northeast of Edinburgh. It's hard to find, but there is a parking lot at Pitlochry, Perthshire. It's on private land, a working farm, so be a careful visitor. Gabaldon says Craigh na Dun, a phrase she invented, means "the stone of the hill" in Gaelic. "I was reading a lot of books on folklore and standing stone circles," she says, "and all of them ended the same way - 'But nobody actually knows the purpose of the stones' - and I thought, well, I can think of something."

Finnich Glen, near Glasgow: Attempt this visit only if you are hardy and fit. In the show, this glen serves as the Liar's Spring, where Dougal confronts Claire about witchcraft, "the sexiest scene in the whole series," Lowstuter says. "It's a beautiful waterscape, like a fairy glen in this secret, wild Celtic landscape." Currently, it's very difficult to find and requires a sketchy maneuver to park your car where there's no official lot and, most treacherously, a climb down mossy, slippery stone steps, some of which no longer fit into their grooves. "How they got a film crew down there, I don't know," Lowstuter says. But thanks to the Outlander Effect, there are plans to put in a parking lot, build a visitor center and repair the stairs.

Some sites are off the tourist path for other reasons. The Reverend Wakefield's home, where characters settle into the library to conduct research, is a private house not open to visitors, according to Jenni Steele, the film and creative industries manager at VisitScotland. "There are a lot of locations in the series that I cannot promote," she said. "They might be on private land, or a historic structure delicate in its fabric that can't cope with too many visitors."

Preston Mill, East Linton, near Edinburgh: This is another site that has benefited from needed repairs. The old mill's wheel, under which Jamie hid from English soldiers, was jammed, but Steele said Outlander fans responded enthusiastically to a funding appeal for restoration work, and the target was reached quickly.

Tibbermore Parish Church, Perth: One of the most harrowing scenes is when Claire undergoes a witchcraft trial with Geillis ("best.vaccination.ever"). "This is no longer a practicing church," says Steele, adding that fans contributed to allow the 1632 facility to work on preservation.

Bakehouse Close, on the Royal Mile in Edinburgh: Although you may not enter, you can climb the outdoor stone staircase to the print shop where Jamie and Claire were reunited. Steele says the shop is quite close to a historic printers shop at Tweeddale Court called Oliver & Boyd. "You can still see the name above one of the doors," she says.

Astonishingly, all the locations for "Outlander," excepting South Africa, were filmed in Scotland. The VisitScotland website features 42 shooting sites up through Season 4, and after Season 5 ends, its locations will be added, too.

The Scots praise Gabaldon not just for the tourists she's brought but for her generosity of spirit and sense of kinship with the country. There are tales of book signings that didn't end until 2:30 a.m., benefits for hospice associations, sandwich shops that gave her food on the house because she did so much to raise the local economy.

"People may go to Scotland thinking of Jamie and Claire, but when they come home, it's Scotland in their minds, because of the way Diana has represented Scotland in the books," Lowstuter says. "She kept very true to the history and magic of Scotland, embellished by her ability to bring it to life on the page."

Contact the keyholder in advance to arrange entry; visit the website for details. Free, but donations welcomed.

One of 80 closes (alleyways) off the Royal Mile in Edinburgh. Located across the street from the Canongate Kirk, 153 Canongate.