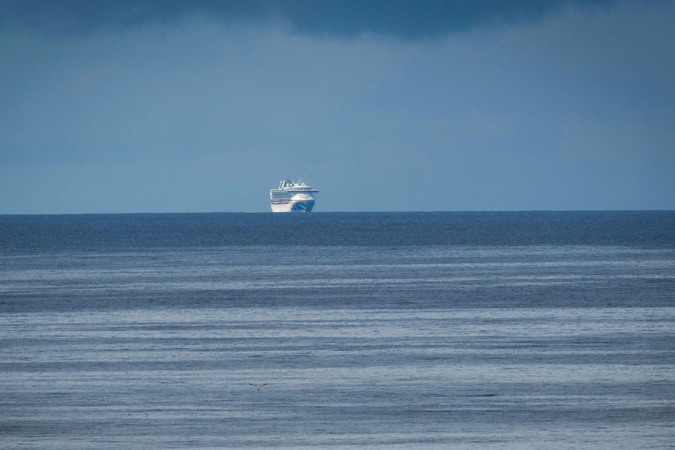 A State Department warning that U.S. citizens should not travel on cruises because of the coronavirus outbreak has placed extreme pressure on the country's cruise industry, a sector that supports more than 421,000 American jobs and contributed almost $53 billion to the U.S. economy in 2018.

Nowhere will the blow back be felt more acutely than Florida, the home base for many of the industry's heaviest hitters and a tourism hot spot. In Florida alone, the sector supports more than 154,000 jobs and generates nearly $8.5 billion in direct spending, according to the Cruise Lines International Association. Employees take home nearly $7.7 billion in wages.

Coronavirus' economic fallout has ricocheted through supply chains, global markets and oil prices. Now the travel and tourism industries face their worst crisis since the 2001 terrorist attacks, and economists worldwide are bracing for months of havoc. On Monday, White House advisers plan to present President Trump with a list of potential policy changes, including deferring taxes on specific industries hit by the coronavirus downturn, such as the hospitality and travel sectors.

Florida in particular would gain from that kind of boost. Major cruise lines have their headquarters in the Sunshine State, including Carnival Corp., Royal Caribbean, Norwegian Cruise Line, MSC Cruises (USA) and Disney Cruise Line.

In 2018, over 7.5 million passengers boarded ships from one of Florida's five cruise ports in Miami, Tampa, Jacksonville, Fort Lauderdale and Brevard County, where Cape Canaveral is located. Almost 2.3 million of Florida's residents cruised in 2018, according to CLIA.

But in a matter of weeks, coronavirus threatens years of industry growth. Nationwide, spending by cruise lines, their passengers and crew rose to almost $24 billion in 2018. That's 33 percent higher than it was in 2010.

The State Department's announcement followed mounting pressure on the industry after American passengers aboard two Princess Cruises ships became infected with covid-19, the disease caused by the virus, within the past two months. Hundreds of travelers have been turned away at multiple ports and subject to lengthy quarantine periods.

The advisory came as a shock to some industry experts, who expected additional precautions on ships rather than a blanket advisory against cruise travel. Previously, U.S. officials had only gone as far as saying that senior citizens and people with health conditions should avoid cruising. Vice President Mike Pence, who is heading up the Trump administration's response to the virus, met with industry leaders Saturday in Fort Lauderdale, Fla., to determine "what more we can do together to protect the American people."

Katie Miller, a spokeswoman for Pence, told The Washington Post on Sunday that the new guidance was "a recommendation made by health professionals that the White House of course adopted."

On Sunday, about an hour before the State Department tweeted out its advisory, the cruise association added in a tweet that it has "committed to do even more to protect our guests, our crew and the communities where we sail," adding "more stringent boarding procedures," more medical resources on board and screening people's temperatures as they embark.

The State Department directive, posted on Twitter just before 4 p.m., warned Americans of the risks of taking cruises amid the outbreak, noting that other countries with strict screening procedures had stopped passengers from disembarking or quarantined them. Three hundred twenty-eight Americans aboard the Diamond Princess cruise ship in January and February were evacuated and isolated for two weeks after being stranded on it for weeks. Seven-hundred passengers became infected in a ship-wide pandemic; seven died.

Another Princess Cruises ship, the Grand Princess, was being held in waters off San Francisco on Sunday, with the coronavirus detected among nearly half of the passengers initially tested. Those results raised concerns that, as had happened on the Diamond Princess, the virus could be spreading among the 3,533 people aboard.

"While the U.S. government has evacuated some cruise ship passengers in recent weeks, repatriation flights should not be relied upon as an option for U.S. citizens under the potential risk of quarantine by local authorities," said the announcement from the State Department, which did immediately not respond to The Washington Post's requests for further information.

The Centers for Disease Control and Prevention issued a similar directive Sunday, recommending that travelers - particularly those with underlying health issues - "defer all cruise ship travel worldwide." The agency added that cruise passengers are at a higher risk of person-to-person spread of the coronavirus.

A spokesman for Carnival Corp., which owns Princess Cruises, Holland America Line and others, noted in a statement to The Post on Sunday that the company's brands had "enhanced their health screening protocols," including conducting thermal scans and temperature checks prior to boarding and on board.

"We are currently in discussions with the CDC, World Health Organization and other health officials, and we met as a cruise industry Saturday, March 7, with U.S. Vice President Mike Pence on an aggressive industry-wide response plan," wrote the spokesman, Roger Frizzell. "The health and safety of our guests and crew is our highest priority, and cruising remains one of the most attractive vacation options available."

He added: "While advisories have been issued, no restrictions are in place for those who choose to take a cruise."

CLIA said in a statement that it was "staying focused on the development of an aggressive, responsive plan as agreed to during the meeting with the Vice President yesterday, which will go beyond the significantly enhanced protocols already in place."

Stewart Chiron, an industry expert who bills himself as "The Cruise Guy" and offers cruise discounts and tips, said he hadn't seen anything like the advisory in 30 years of observing and talking about the cruise business. After the meeting with Pence, he had anticipated changes on ships, such as increased coronavirus kits on board or denial of travel for people from certain areas heavily affected by the virus.

But Sunday's recommendation against an entire form of travel has stunned the industry as a dramatic escalation, he said. He accused officials of "trying to make the uninformed public feel better that the government is doing something" and pointed to the Centers for Disease Control and Prevention's struggle to roll out widespread testing for coronavirus.

Mike Driscoll, the editor-in-chief of Cruise Week, said he too was taken aback by Sunday's news, noting that company leaders were set to meet again with government officials on Tuesday to discuss ways they could address concerns.

"It's just a little jarring to have that on the heels of something that's saying it's okay. . . we're working on something," Driscoll told The Post.

He's confident some will keep cruising. But people pay attention when, say, the State Department issues a warning against visiting a certain country, he said. Travel agents he talked to Sunday all had the same message about the advisory: "This is huge."