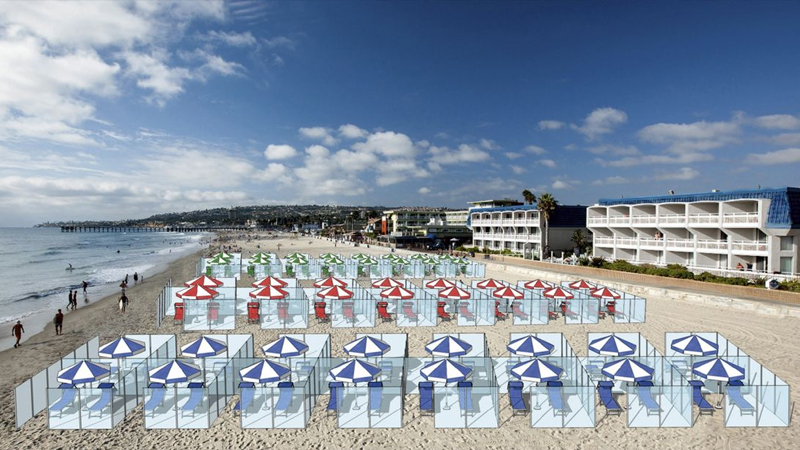 When Italians look for light at the end of the tunnel in the sixth week of their nationwide lockdown, a lot of them see the same thing: sunshine, endless beaches and the warm Mediterranean sea.

But with summer approaching fast and no indication that the deadly coronavirus is anywhere near being eradicated, some are starting to ask whether a return to the thousands of beaches dotting the country's 4,971 miles (8,000 kilometers) of coastline is even possible.

If you've been on an Italian beach you know: there's a lot of social, but not much distance. Most of the prime spots have been snapped up by private "bathing establishments" where clients -- many of whom return each year and pay by the season -- are stacked in tight rows of deck chairs or chaise lounges. Neighboring bathers share the shade of umbrellas to gossip, smoke, drink coffee or play cards, as their children roll in the sand nearby.

"We'll be going to the beach this summer," Culture and Tourism undersecretary Lorenza Bonaccorsi assured Italians in an appearance on state Rai television. How will the government assure adequate health and safety measures? "We're working on it," she said.

Like other European governments, Italy is struggling to find a way to ease movement restrictions and get the economy rolling again while managing the risk of a virus resurgence.

For Italy, tourism is a big part of the equation. Though the industry accounts for as much as 13% of GDP, revenue in the first half will be down 73% compared with last year, with some 25 million fewer foreign tourists between July and September, according to the CNA confederation of artisans and small and medium-sized companies.

With the spring season virtually wiped out, and uncertain prospects for foreign visitors returning anytime soon, the country may need Italian bodies on its beaches this summer in order to kick-start the economy.

It's far from clear how that will work. Even though the nationwide lockdown is set to end on May 3, Italians are being told to expect only a gradual opening-up of the country, with strict rules covering everything from safe distances to when and where to use masks and gloves. A task force to map out the country's exit from the lockdown has yet to release its recommendations.

For Italy's 30,000 beach operators, the unanswered questions range from what to do if a customer gets sick, to how bathrooms and showers should be cleaned and managed, to whether food can safely be served. And no one seems to know how social distancing would work.

Nuova Neon Group Due Srl, a display-panel maker from the Emilia-Romagna region, has proposed installing plexiglass panels around each pod of deck chairs and umbrellas, fueling social media reactions about the "barbecue temperatures" and the "prison-like atmosphere" the sectioned-off seating would create.

Italian media outlets have speculated about staggered entrance times, walk-through access tunnels with disinfectant sprinklers or security guards to enforce distancing rules. Some have even suggested numbered tickets for access to the surf.

Still, regional officials plan to soldier on, with or without a plan from the central government. Veneto Governor Luca Zaia said cancellations from Germans who traditionally flock to his region are as low as 7%, a sign that tourists are still in wait-and-see mode for the summer. "I don't think it's going to be a disaster," he said.