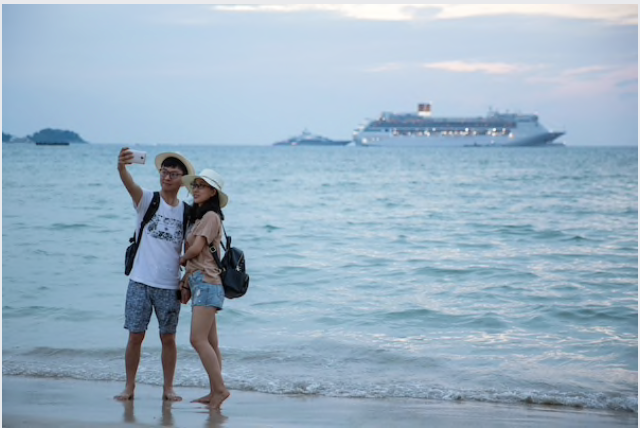 As a swimmer, I've always felt at home in the ocean. But Phuket, a place I've visited more than a dozen times since childhood, is where I find stillness.

The ocean laps calmly, and when you close your eyes to feel the salty breeze, you can hear the rustling of tropical forests right off the coast. Vendors sell just-cracked coconuts sloshing over with fresh juice. Point in any land-bound direction, and within a few miles you'll find the world's best beach resorts, gracious hospitality, and restaurants that vary from street food stalls to a Michelin-starred dining room. It's the best of all worlds, somehow squeezed onto a picturesque island that's just a puddle-hop flight from my home in Bangkok.

Even an "up and down" one-hour flight feels impossibly far away at this time. While some of Thailand's provinces haven't reported a single case of covid-19, Phuket has become the country's biggest hot spot. The island, which once received about a million tourists each month, is now deserted. And the government is forecasting that tourism won't reignite until a vaccine emerges, which could take well more than a year.

But Phuket remains my mental refuge. Bangkok, like many other locked-down cities with its compact living spaces, isn't meant for a quarantined lifestyle. When I open my windows in my downtown apartment, I'm greeted by construction noises and rooftops of neighboring buildings rather than blue water and the sound of chirping birds. Life, in other words, is not a beach.

Until I can get back safely to Phuket, I'll relish one silver lining about its current quietude. In recent years the island was suffering from overtourism; huge numbers of visitors and too many boat businesses had led to the buildup of marine debris, damaged coral, and a disruption in the balance of wildlife and natural habitats. A pause on human visitors has brought out rare sea turtles to nest in record numbers on empty beaches, and the manatee-like creatures called dugongs have been spotted in typically boat-riddled shallows. That means Phuket will be its most beautiful self whenever we can return.

When the time comes, of course I'll hit up some of my local favorites-but I'll also indulge in the singularly luxurious spots that have given Phuket its prime position at the top of many bucket lists. Here's how to nail the best of both worlds.

Even as a native Thailander, I find the food served from southern kitchens akin to the old ghost pepper challenge-it flexes your spicy taste receptors until they're numb and tingly. Besides being unapologetically hot, it's also rich and decadent: think pork kua kling, a spicy dish spiked with kaffir lime leaves and curry paste, or the stir-fried bitter beans with shrimp paste called sataw pad kapi.

I tend to order both at Raya, my favorite restaurant on the island. It's set inside a century-old house in Phuket Old Town-an unassuming spot that you could easily pass by and never notice, with a geometric tiled floor and black-and-white photos on its walls. It's not air-conditioned, so on a hot day, I'll head to the nearby Tu Kab Khao instead. Located in a colonial building with coffered ceilings and Murano chandeliers, it focuses on prettied-up versions of family recipes such as stir-fried pork leg with salted krill and stir-fried pumpkin with dried shrimp and shrimp paste.

Charter a boat for a day from Phuket, as it's possible to explore the many islands of the Andaman Sea. Head a few hours northwest to find the Similan Islands, an archipelago of 11 islets that are ringed by crystal-clear waters inhabited by neon coral, turtles, and reef sharks. To the east are Thailand's famous Phi Phi Islands and the less-visited Koh Yao Noi and Koh Yao Yai, which offer secluded beaches and pristine coves.

On Phuket itself, there's much more to do than whiling the day away under the sun. Old Phuket Town, with its brightly colored Portuguese-inspired buildings, has long been dismissed as overly rundown. But the area has been experiencing a renaissance: Historic buildings have been restored and turned into cafes, restaurants, and shops. Enormous, colorful murals now coat previously crumbling facades. Most nights of the week, the streets are lined with vendors who simmer traditional dishes, be it pots of rice and pork rib soup or bowls of stir-fried noodles with eggs.

Just a short cab ride away is Chalong Bay Rum Distillery, where small-batch rum is made from organic Thai sugarcane. Go in the afternoon for a two-hour cocktail workshop; you'll learn about the artisanal process while roaming a sun-drenched plantation. From the thatched-roof open-air dining room, you'll also learn to make a few drinks, including a Thai twist on the caipirinha that's flavored with red chile. (They call it the spicyrinha.)

When it comes to hotels in Phuket, there's no sense in going off the beaten path. The island is home to some of the best resorts in the world, including the very first feather in Aman's glorious cap. Opened in 1988, Amanpuri has 44 villas with private pools and 40 pavilions spread out on a former coconut plantation, each adorned with traditional Thai arts including decorative bowls and Buddhist ornaments. Not only is it a coveted spot to rest your head at night, but the resort offers access to a private beach with ultra-fine sand and clear water, where the lounge chairs are shaded by beautiful parasols and flanked by enormous gray boulders.

If nature is what you need, try a treetop villa at Keemala instead. The hillside resort is surrounded by lush rainforest and looks pulled out of a fantasy film set; some of the rooms are fashioned after birds nests, and from their plunge pools you can commune with chirping cicadas and crickets.

For the ultimate in seclusion, if that's what remains on order in a post-lockdown world, there's Como Point Yamu on Phuket's quiet east side. Its turquoise-hued, glass-walled villas face the bay, which means any photo you take pointing outwards will be blue-on-blue-on-blue. Included in its amenities are a boat that takes you to a private beach club on nearby Naka Yai Island-perfect for kayaking and paddle boarding-and a 100-meter-long infinity pool facing the vast sea and its many limestone islands.

As I daydream about Phuket, I'm planning on supporting Soi Dog Foundation, which rescues dogs from the meat trade and helps find them homes abroad. With international flights grounded, the organization will need more help than ever to provide food and medical support for the animals in its care.