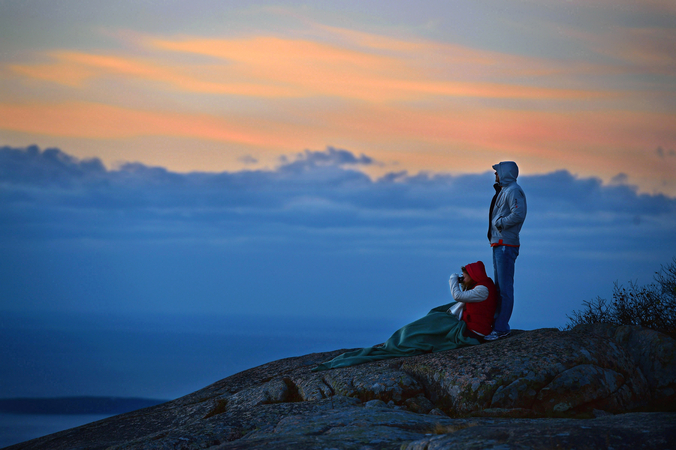 People watch the sunrise from Cadillac Mountain at Acadia National Park in 2014. MUST CREDIT: Washington Post photo by Matt McClain

BAR HARBOR, Maine - Tourists typically pack this seaside village on Maine's rocky coast for the Fourth of July holiday, lining up to take whale-watching trips, hike Cadillac Mountain or savor slices of blueberry pie. But since the coronavirus struck, the sidewalks have been desolate.

About 200 cruise ships have canceled their stops. Fireworks, clambakes and conventions are all off. The Bar Harbor Regency, an elegant hotel that once hosted the Obamas, did not hold a single wedding in June.

"It's a ghost town," said Deb Jordan, director of sales and catering at Bar Harbor Resorts. She wore a mask with a smiley face on it, but she was not smiling. She called the scene outside her office here "eerie, scary, nauseating."

"There's no cars and no people. The phones aren't ringing," she said, her voice rising after another week of hearing from sobbing brides whose coronavirus-summer weddings were teetering on the brink. "And all I'm doing is sitting here and canceling reservations through the Internet."

Vacationland feels lonely this year. The coronavirus has hammered the tourism industry worldwide - closing national parks, sealing off beaches and shuttering summer camps - and Maine is no exception. But the state also has weathered the pandemic far better than most U.S. states, and officials have tussled with the tourism industry over whether to restrict millions of out-of-state visitors or capitalize on Maine's safety record to salvage the last few weeks of summer.

And the pandemic is hitting Maine in its bicentennial year, with a multitude of planned events - lobster festivals, county fairs and Fourth of July parades - all canceled.

"You can't have economic health without public health," Gov. Janet Mills, a Democrat, said in an interview Wednesday. If infections spike, she said, "That's the worst possible thing that could happen to our economy. And the worst possible thing that could happen to the tourism industry in particular. People will not want to come back to Maine for a long, long time if we can't tell them, as we've been saying, 'Come to Maine because we're safe and we want you to stay safe.' "

Maine has one of the nation's lowest coronavirus infection rates, with about 3,300 confirmed cases of covid-19 (the disease caused by the virus) and 105 deaths, the majority in nursing homes, despite having the highest share of older people in the United States. Twenty-one percent of the state's 1.3 million residents are senior citizens 65 and over, according to the U.S. census.

Tourism is one of the state's biggest industries, accounting for 1 in 6 jobs and pumping $6.5 billion into the economy in 2019. Industry leaders say the all-too-short summer, when about 22 million tourists flood into Vacationland, makes up the most lucrative months. Acadia National Park, outside Bar Harbor, counts more than 3 million visitors a year.

Maine has required tourists from several states to quarantine for two weeks once they arrive here, or they must take a coronavirus test within three days of travel. But industry leaders said many tourists found the rules cumbersome - especially when they planned to spend most of their time outdoors anyway - and chose to go elsewhere instead.

State officials say their strict visitation requirements, combined with a mandate to wear masks, limiting the size of social gatherings, and the luck of having a largely rural state, have saved lives. They shudder to think what might have happened if the state had allowed easy entry to a flood of visitors from some of the state's top customers in places that had major outbreaks, such as Massachusetts or New York. There have been surges of the virus in other vacation destinations in recent days: Myrtle Beach in South Carolina reopened to recoup the summer and turned into a coronavirus hot spot instead. Los Angeles and Miami Beach are closing for the Fourth of July. Texas saw the virus soar after Memorial Day gatherings.

But industry leaders said that though they initially understood the need for tough measures, they have dragged on too long. Since the pandemic began, Maine's retailers and innkeepers have installed plexiglass partitions in hotel lobbies, sanitized rooms and kitchens, spaced out tables and reduced the number of people allowed on tours to avoid infection.

"To me, at this point, I think we have to learn to coexist with the virus," said Manoj Mirpuri, owner of Bliss Jewelers in Bar Harbor, which sells whale-tale-shaped wristlets and anchor pendants, but had hardly any customers early this week.

Vacancy signs hung outside cozy inns and stately hotels along the coast this week, with rooms that normally are an impossible find this time of year fetching slashed prices instead. Clerks sit in empty shops scented with coconut oil, and there are no crowds to enjoy the salty breezes and cooler climes. Some water parks and inns have closed for the season. Thousands of people are struggling or out of work - and not just in the luxury hotels, but also among the florists, photographers, tour guides and gift store workers who support them.

"I never thought we'd get to this point," said Alf Anderson, executive director of the Bar Harbor Chamber of Commerce. He said some businesses have closed permanently, while others "are teetering on the edge" in a season that is strongest from mid-May to the end of October. "A lot of these businesses, they make their year's revenue in four to five months out of the year, and we've already lost two."

But others said they appreciated the governor's caution, noting the outbreaks in other states where coronavirus infections initially were low.

In York, a city of 13,000 people about 70 miles northeast of Boston, innkeepers Tony Sienicki, 77, and his husband, Jerry Rippetoe, 76, have welcomed visitors for years, often parents who were in Maine to drop off their children at summer camps. But this year they closed the Inn at TJ's and issued refunds.

"If someone came here and got sick, I'd never be able to live with myself," said Rippetoe, an interior designer. "We're in our 70s, and we're the most at-risk people on the planet. She's looking out for all of us."

Dennis Burnheimer, 53, manager of Stage Run by the Sea motel in Ogunquit, installed sanitizer dispensers and plexiglass shields at the front desk. Behind that, he wore a mask. The air smelled of saltwater and disinfectant.

"Most people are afraid, and the state has scared them away," he said. "I don't want anyone to get sick."

State Rep. Kent Ackley, an independent from Maine's Lakes region, said he understood the mixed feelings. He and his wife run a glamping operation, and he knows his constituents love the Vacationland moniker because he filed a bill to change the slogan to "Staycationland" and it went down in flames. But he also has an elderly 81-year-old mother who is at high risk for infection.

"If we got sick and brought it to Mom, that would be devastating," he said. "There are a lot of people in Maine who understand that. You put family first."

In the Bar Harbor area, which has drawn socialites and campers for ages - from the Rockefellers to celebrities such as Martha Stewart - tourism is at the heart of the village. Here, people are supposed to relax, switch their frantic lifestyles over to the rhythms of the sun and the tides. Tourists who filtered into town this week said they saw more people than they expected, given the fear of infection. Some wore masks, but a few did not. And some followed the quarantine rules, but others slipped out to the supermarket or gathered in restaurants.

Bill Kamil, 54, a history professor from Ohio, and his wife Michelle Sampson, 52, a costume designer, said they and their sons, Hunter, 13, and Sebastian, 12, had no trouble quarantining in his family's summer home outside Bar Harbor. They wore masks as they sat on a bench near the waterfront with their dog, Dude.

"We think it's a social responsibility," Kamil said.

After the governor relaxed restrictions on Wednesday, allowing tourists from New York, New Jersey and Connecticut to visit without quarantining or taking a test - notable exception: Massachusetts - tourism industry leaders and retailers cheered and hoped summer would pick up and carry the momentum into fall's leaf-peeping season. Vermont and New Hampshire already were exempt because of their low rates of infection.

Eben Salvatore, operations director for Bar Harbor Resorts, said while he was happy that people could visit more easily, the shift came too late to rebound for the holiday. "Giving us New York, New Jersey and Connecticut in July is like selling pumpkins in November," Salvatore said.

His friend Kevin DesVeaux, who owns the West Street Café, closed his business on Monday, a move that is unthinkable during a normal peak season. Tourism is so reliable here that he sank more than $2 million into rebuilding his restaurant a few years ago. But this year he lacked workers, and customers.

"This was our year to get back on our feet," DesVeaux said.

Larry Sweet, 63, a co-owner of Oli's Trolley, said he typically runs 20 tours a day in peak season, but this week was down to four, and with smaller groups for social distancing. He said he believes the governor had Maine's best interests in mind, and he hopes the state is "making the right choice" to reopen.