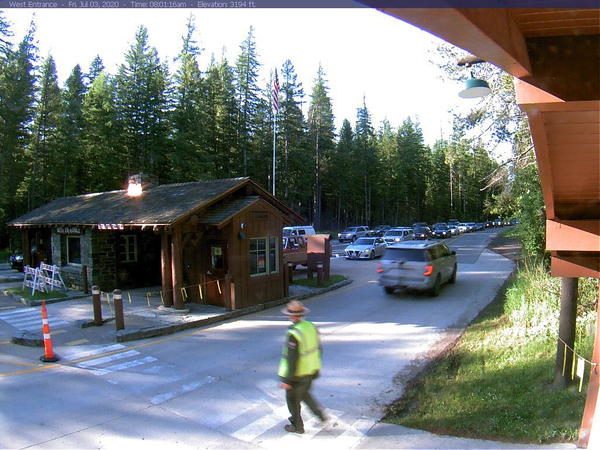 As Montana warily reopened last month to pandemic-weary tourists, an isolated community held firm with closures and stay-at-home orders. Few outsiders would have paid much attention but for one detail: The Blackfeet Nation borders Glacier National Park, and its decision blocked access to much of the vast wilderness there.

The result this month has meant throngs of visitors crowding into a tiny corner of Glacier - a crown jewel of the park system - with long lines of cars at what is now the only entry point.

And the bottleneck won't disappear anytime soon. Tribal leaders recently announced they would keep the eastern entrances and roads to Glacier, which lie on reservation land, closed at least through August.

"Our number one objective is to keep people alive," said Robert DesRosier, who leads the tribe's covid-19 incident response team. "We don't want one person to die. Our elders are the keepers of the culture, and we can't afford to lose them."

The Blackfeet's fears are well-founded. Covid-19, the disease caused by the novel coronavirus, has ravaged some Native American communities. In Montana, state data show that more than a third of the people to have died so far identified as Native American, though natives make up less than 7 percent of the population. In the Southwest, the Navajo Nation has been one of the country's worst hot spots.

The National Park Service and local tourist companies are backing the Blackfeet. Boat and bus operators are shut down for the summer, as are hotels and restaurants on Glacier's east side, and Park Service officials are weighing Glacier's first-ever ticketing and reservation plan to deal with the crush of traffic. The park, which extends north to Canada, encompasses a million acres of glacially carved peaks, turquoise-colored lakes, trails and wild country. Until a controversial land agreement in 1895, all of it was Blackfeet country.

Just one thruway - the evocatively named Going-to-the-Sun Road - traverses Glacier. Because snow and ice at Logan Pass, elevation 6,646 feet, routinely obstruct the road into July, most of the park's 3 million annual tourists come during an abbreviated summer season.

With the east side locked up, rangers have been dealing mostly with traffic management near the west entrance. Many locals have wondered why the area reopened at all given the risk of travel amid the pandemic.

Most tourists have respected the tribe's decision, according to DesRosier. Blackfeet wildland hotshot fire crews are patrolling roads on the reservation, keeping any outside traffic moving through and allowing nonresidents to stop only for gas - and only if they're wearing masks and gloves. A few angry voices have complained on social media, with one man suggesting that the National Guard be mobilized against the sovereign nation, but there has been no serious pushback.

"We rousted out some campers who said, 'We didn't know this was Indian country,' " DesRosier said. "It's all about education."

Montana's Native American nations have been a priority for Gov. Steve Bullock, a two-term Democrat now running for the U.S. Senate, as his administration manages the state's response to the coronavirus. The governor visited all seven reservations in recent weeks and put them first in line for increased testing, promising the state will respect any additional closures and measures they take to protect members.

"Right from the time we declared a statewide emergency, we've been in regular contact with tribes to make sure they have what they need to keep tribal members safe and healthy," Bullock said in an interview Monday. Many families live in multigenerational households and have higher rates of underlying health conditions, which increase their risk. "Our tribal communities are that much more important to protect."

It's a stark difference to the situation in South Dakota, where Republican Gov. Kristi Noem in May asked the White House and the Justice Department to intervene after leaders of the Oglala and Cheyenne River nations set up boundary checkpoints to stop non-reservation traffic. Last month, the Cheyenne River Sioux Tribe filed a federal lawsuit against President Donald Trump, the Interior Department and Bureau of Indian Affairs for interfering with the tribe's efforts to prevent coronavirus infections.

Bullock said he has no intention of countering the Blackfeet's border closures, including at the national park. Montana, like many states, has seen a spike in coronavirus infections since it eased caps on restaurants, bars, gyms and movie theaters; more than half of roughly 1,600 cases have been confirmed just since June 10. On Friday, the state recorded another daily record of 127 new cases, and Bullock warned that some restrictions could be reimposed.

The governor considers local events like weddings and dances a larger concern for transmission than out-of-state travelers. Not everyone dealing with tourists agrees.

Paul Doughtery, a teacher who works summers at a recreational equipment company inside Glacier, said the crowds worry him. While the park is encouraging everyone to follow certain protective measures - "Don't arrive with a bear face! Please wear a mask!" - Doughtery thinks the state has sent a mixed message by lifting quarantine requirements on visitors. Montana residents are being treated like service staff for vacationers, he complains.

"There's just a carelessness" among visitors despite the pandemic, Dougherty said. "To be fair, they're doing everything the state has said is safe. I can't shame and blame them too much, it's the state that has abdicated responsibility here."

On the Blackfeet Reservation, home to around 10,000 people, staying closed was not an easy decision. Businesses owned by tribal members have suffered severe financial losses, and the cancellation of gatherings like North American Indian Days - an annual parade, rodeo and powwow celebrating native traditions - have taken an emotional toll.

Angelika Harden-Norman and her husband, Darrell, a Blackfeet artist, own a tepee lodge and gallery that sits just outside the small town of Browning on the road to Glacier. While 2020 has been incredibly difficult for them and all other local businesses, she says the pain is necessary.

"We get guests from all over the globe every year, exactly what we don't want right now on the reservation," she noted.

The tribe was able to hold the virus at bay for months; its mask order, issued in March and broadly supported by the community, remains in place.

But only days after leaders announced that the east side of the park would stay closed, nine Blackfeet tested positive. The reservation has suffered no deaths linked to covid-19.

"We went 105 days and kept the virus out of here," DesRosier said. "Then some things happened around us, the state of Montana went to Phase II, and people let their guards down."