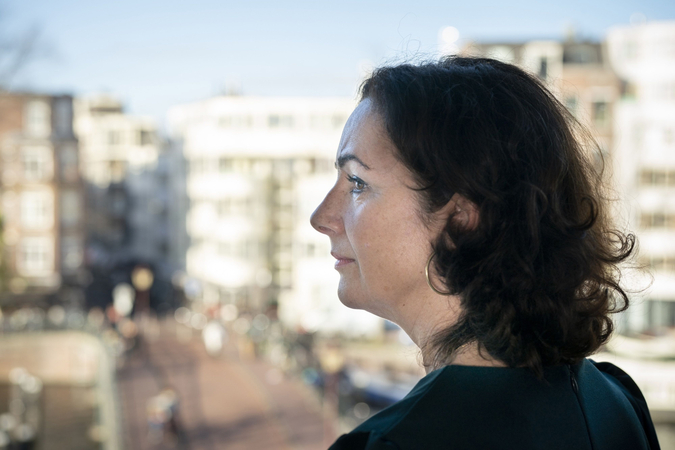 Femke Halsema, mayor of Amsterdam, in her office on Nov. 30, 2018. MUST CREDIT: Bloomberg photo by Jasper Juinens.

Europeans are free to travel again, but Amsterdam's mayor is anxiously telling visitors to stay away.

The return of crowds meandering through the city's narrow streets could spark a new wave of infections, putting local officials in the unusual position of actively trying to keep people from visiting.

"If you want to come, then think twice about it," Femke Halsema said in an interview in the garden of her 17th century mayor's office on Thursday. "The tourists who are coming to Amsterdam at the moment I want to say quite urgently: avoid the busy places, avoid the weekend."

Amsterdam has been struggling with crowds since cheaper flights made the city's historic center a popular weekend destination. Before coronavirus lockdowns, its renowned red-light district, marijuana shops and picturesque canals attracted over 1 million visitors a month -- more than its permanent population.

The reputation as Europe's party town strained resources and pushed locals out of the center. The pandemic adds a public-health element to Amsterdam's tourism backlash.

"Corona and mass tourism just don't go together -- certainly not in a historic city center like in Amsterdam," said Halsema. "There is a risk of contamination," as a large increase in tourists means that it's no longer possible to maintain social-distancing rules.

A recent influx of visitors prompted the Amsterdam government last Saturday to close several streets in the narrow alleys where scantily-clad prostitutes pose in brothel windows. It put up signs on the popular Dam square to warn people of the danger of spreading the disease, advising them to maintain a distance of at least 1.5 meters (5 feet).

In an effort to limit risky behavior, one-way walking lanes have been implemented and parts of the red-light district can be closed. Shops in the dense 500-year-old center will be banned from selling alcohol from Thursdays to Sundays starting this weekend and until at least Sept. 1.

While new infections remain low compared to the height of the pandemic, cases doubled last week, Dutch health agency RIVM said on Tuesday, warning that the disease is spreading again.

Halsema pointed the finger at young people from neighboring countries looking for a cheap thrill without adding much to the local economy. More broadly, the backsliding on rules designed to thwart infections is cause for concern.

"In general, you see all over Europe that people are increasingly not caring about social distancing," Amsterdam's first female mayor said. "That is really very worrying."