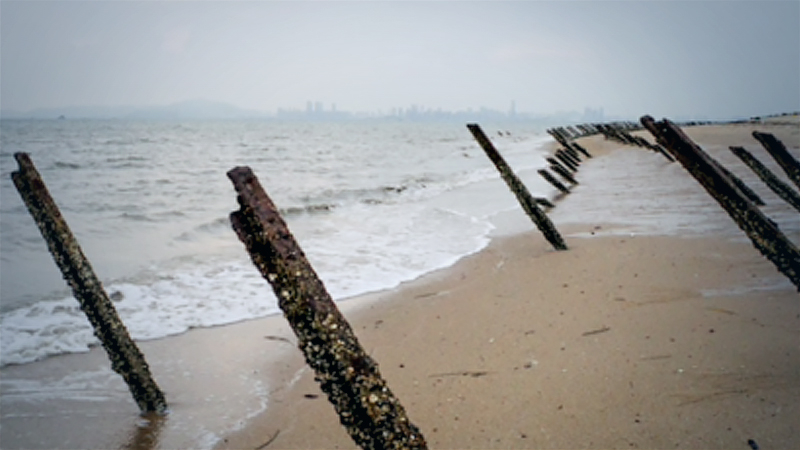 Anti-landing barricades protect Kinmen from Chinese invasion. The mainland city of Xiamen rises from across a channel that was previously filled with undersea mines. MUST CREDIT: Washington Post photo by Gerry Shih.

GREAT KINMEN ISLAND, Taiwan - From here, China feels palpably close. So does the memory of war.

Anti-landing barricades and rusting tanks on the beach stare down a Chinese metropolis hovering on the horizon. Soldiers from the Taiwanese garrison thunder down the road, still on guard for another attack. In rural villages dotted with bomb shelters, older residents speak of Chinese artillery regularly piercing the quiet evenings on their sleepy island and reciting a four-character declaration of loyalties: "Kill pigs, root out Maoists!" 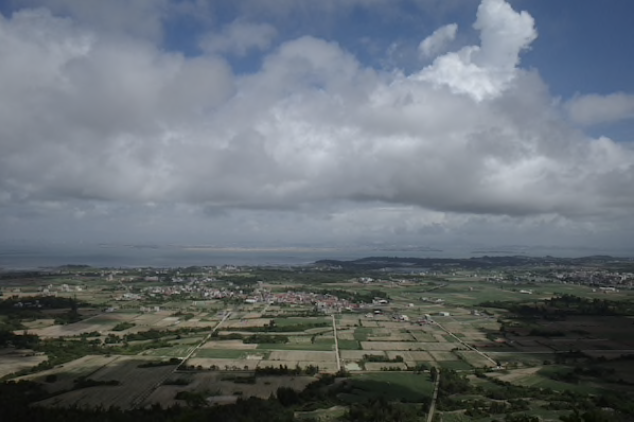 From 1949 - when China's civil war officially ended - until the 1970s, the strategic cluster of the Kinmen Islands, controlled by Taiwan but nestled just three miles off China's coastline, was the site of three amphibious assaults and repeated shelling in the Cold War that pitted Communists against Nationalists, Chairman Mao Zedong against Generalissimo Chiang Kai-shek and U.S. President Dwight D. Eisenhower. 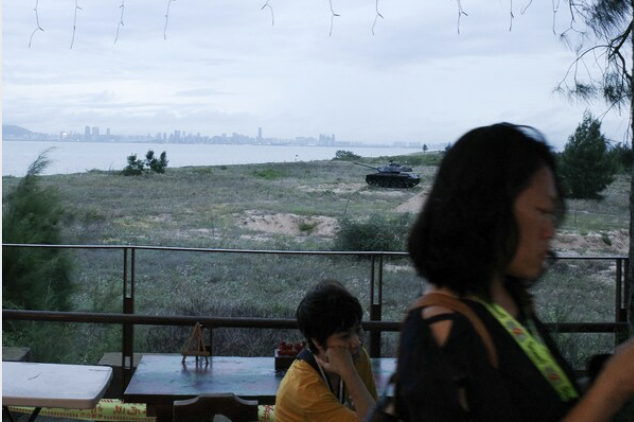 Today, as tensions soar in the Taiwan Strait and relations plummet between China and Taiwan's military backer, the United States, talk is again stirring in Taipei, Washington and Beijing of the possibility of China attacking Taiwan, which it claims as its territory, or seizing one of its vulnerable outlying islands while the world is occupied by the coronavirus pandemic.

But a half-century after the Chinese guns fell silent, the prevailing sentiment of Kinmen residents toward their massive neighbor isn't historical enmity or fear. It's fraternity, said Xu Jicai, a 45-year-old lion dancer and village chief. 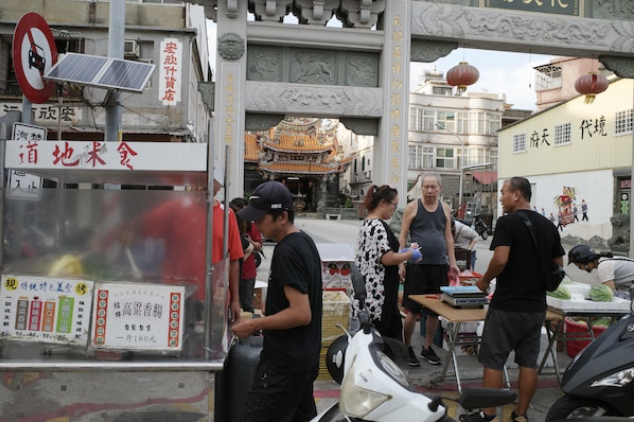 Sitting outside his office, Xu marveled at the twist of history that turned his war-scarred island into the most pro-Beijing constituency in Taiwan. In many ways, Kinmen is a geographic and political outlier in Taiwan, a vibrant democracy that has generally voted to shift away from China's orbit. In other ways, it's a microcosm of Taiwan's existential and generational debates over China - and all the insoluble questions of politics and commerce, of culture and shared blood.

"Could you point a rifle at someone whom you've eaten with, whose temple you've visited?" said Xu, dismissing talk of the Chinese threat as fearmongering by politicians in Taipei, the Taiwanese capital that's an hour-long flight away.

"If Taiwanese politicians complain that we're drawing too close to China," Xu growled, "perhaps they could tow our island across the strait. Or at least invest more in our economy."

The thaw began in 2001, when Kinmen opened transportation and trade links with the mainland. Since then, roughly 20 million Chinese tourists have streamed in from southern Fujian province, where the language, food and bowed "swallowtail" roofs on traditional homes are all recognizable on Kinmen. Until the 22-minute ferry rides were stopped during the coronavirus outbreak, Kinmenese made countless trips the other way for weekly shopping or visits to ancestral homes and temples. Those trips are welcomed - and assiduously courted - by Communist Party-linked liaison groups.

Beginning in 2018, China has provided Kinmen with fresh drinking water through an undersea pipeline. Talks are underway for Kinmen to import two more crucial resources, electricity and natural gas. The Kinmen proposals have been applauded by Chinese leader Xi Jinping, who has made absorbing Taiwan and reclaiming all of imperial China's lost territory, including Taiwan, a centerpiece of his national rejuvenation project.

In recent years, Kinmen officials have mulled the once unthinkable: building a bridge to the mainland, or turning Kinmen into a free-trade zone that attracts Chinese investment and accepts Chinese currency. Both proposals stalled, but they raised intense debate - and suspicion - in Taiwan about Kinmen's loyalties and its political status, which have never been settled.

Arguments over Kinmen's relationship with China swing between "accusing someone of either jeopardizing the most crucial geopolitical relationship of all or committing treason," said Michael Szonyi, director of the Fairbank Center for Chinese Studies at Harvard University and the author of "Cold War Island," a book about Kinmen.

"Virtually every local issue on Kinmen, no matter how small, gets linked to the larger geopolitical context of how to relate to a rising and changing China," Szonyi said. "These are exactly the same questions that Taiwan, that Africa and Latin America, that even the United States are increasingly grappling with."

Part of the uncertainty over Kinmen stems from the ruling Democratic Progressive Party (DPP), which leans toward Taiwanese independence from Beijing but has not clearly specified whether it envisions Kinmen and Matsu, the two island groups closest to China, as part of an independent state. Some DPP leaders have suggested that in the event Taiwan declared independence - which could trigger war with Beijing - it should cede the militarily indefensible and politically wavering islands to China.

Part of the murkiness is historical. The United States, which is legally required today to take "appropriate action" in the event of a Chinese attack on Taiwan, did not include Kinmen under a foundational defense treaty with Taipei in effect from 1955 to 1979.

Beijing sought to test whether Washington would defend Kinmen. When China bombarded the island in late 1954, killing two American military advisers, the Pentagon raised the possibility of using nuclear weapons against China, but the idea was rejected by Eisenhower.

Mao again probed U.S. commitment in 1958 with shelling and an amphibious assault on Kinmen that Taiwanese troops repelled. Again, the U.S. military did not strike back but supplied Taiwan with artillery and missiles. As the Cold War deepened, whether to defend Kinmen became an issue in the 1960 presidential debates between John F. Kennedy and Richard Nixon.

America's answer to that question remains ambiguous today, long after Taipei pulled most of the 100,000-strong military garrison from Kinmen following years of campaigning by democracy activists against the repressive military rule enforced by the Nationalist Kuomintang (KMT) party.

But ask locals, and they say the troop withdrawal in the 1990s gutted the economy. Restaurants serving roast chicken and fiery sorghum liquor failed. Laundromats closed. There were no real estate projects to speak of. But tourism was a way out. To attract ever-growing numbers of mainland visitors, Kinmen shopkeepers last year hung the Communist Chinese flags along an entire street, sparking outrage across Taiwan.

Around the corner from village chief Xu's office, Yung-hsung Chen nodded at the hiring agencies lining the anemic streets. On an island bereft of growth prospects or young people, the place is left with mostly elderly residents - and a gaping demand for agencies providing caretakers.

"There is no dynamism, no circulation of people or investment," Chen said. "Without the mainland, there is no future."

Near the beach a few miles north, across the street from a bullet-ridden house that was the site of fierce fighting in 1949, Lin Rongguan, 92, was more pointed. He was 21 years old and hiding under a bed when Communist troops landed, sparking a firefight before their capture. Today, Lin is a dyed-in-the-wool supporter of the KMT, which advocates closer relations with China and maintains a firm hold over hearts and minds in Kinmen.

Last month, Lin saw on television that the de facto American ambassador to Taiwan, Brent Christensen, traveled to Kinmen to commemorate the 1958 casualties and show solidarity with Taiwanese President Tsai Ing-wen, who leads the DPP. Lin shook his head.

"The Americans are the worst," he said. "They get involved because they don't want a unified China."

On the opposite end of the political spectrum is Weng Mingzhi, a major democracy activist from the 1990s who pushed to end decades of military rule under the KMT and to start free elections in Kinmen. These days, he's a senior official in Kinmen for the DPP, a party that finds it "hard to get votes," as he bluntly acknowledges.

It hasn't helped, Weng said, that Kinmen has been the site of intense political influence campaigns that urge unification with China and are believed to be connected to the Communist Party. In recent years, small political parties with known ties to mainland-linked mafia or even murkier provenance have pushed ideas like holding a local referendum on combining Kinmen and the Chinese city of Xiamen into a "Peace Experimental Zone."

The DPP's job is to show that it, not the KMT or even China's Communist Party, is best for Kinmen's future, Weng said.

"When we've been in power, infrastructure, education, the county budget - all that's gone up," he said. "We can value economic prosperity and feel friendship toward China, but that doesn't mean we accept their political rule. Why put ourselves back in a cage?"

But peel back the jockeying among political parties, the talk of war or subjugation, and what remains is what many Kinmenese say is a basic fact: They simply don't feel Taiwanese.

Clarissa Chen, a 25-year-old sociology student, grew up in Kinmen hearing stories about Communist attacks and how Kinmen sacrificed for Taiwan. When she moved to Taipei for college, she was constantly reminded of how far off Kinmen was in the Taiwanese imagination when students asked if she rode cows to school or why she spoke Mandarin like mainland Chinese.

"They would get frustrated when I would say I'm Kinmenese - and a citizen of the Republic of China," she said, referring to Taiwan's formal name.

These days, when she sees news about China's crackdown in Hong Kong or its desire to annex Taiwan by 2049, she worries deeply about Chinese aggression. But she says she and her relatives also feel dubious about the notion of a Taiwanese national identity and worry about antagonizing China. "Is our government peddling fear?" she said.

Chen's friend Wang Ling, a 35-year-old entrepreneur in Kinmen who runs a cafe and workspace that's a hub for the few young creative types on the island, said she has more clear-cut sympathies for the independence-leaning camp after she spent years living in Taiwan.

When DPP leaders visit, Wang and her peers who voted for Tsai ask them to pay more attention to Kinmen, to promote investment that could lure young Taiwanese to settle there or young Kinmenese to move back. Maybe one day, she says, young people might start building up a community on Kinmen and shift its politics.

But she's not overly optimistic.

"It's hard after we have tasted the sweetness of ties with China," she said. "We do get scared about what would happen if there were a referendum. It's overwhelming to think: What if I build up my home, and then it gets transferred to another owner?"