Taiwan, Thailand and Japan are now the most-searched travel destinations this year, according to research by Agoda.com.

As the Covid-19 situation improves in many countries and social restrictions are lifted, the travel itch that has been subdued for months is growing stronger around the world.

Taiwan tops the search list among travellers, beating last year’s champion Thailand, which is knocked into second ahead of Japan, Vietnam and South Korea in the top five. The United States, Australia, Hong Kong, Malaysia and Indonesia complete the top 10.

Among solo travellers, Japan and Thailand take second and third spots, while family travellers put Thailand top of their list, ahead of Vietnam. For group travellers, Vietnam is the second-most searched destination ahead of Thailand.

The Taiwanese cities of Hualien, Yilan, and Taipei are the most popular destinations searched for stays in the latter part of 2020. Bangkok and Tokyo, the top two most searched destinations in 2019, fell to seventh and ninth respectively, while Taipei (3) holds the same position as last year.

For couples, this year’s wish-list is lead by Hualian, Taipei and Bangkok, followed by Yilan, and Jeju Island, a shift in gears from last year’s couple searches which lead with Bangkok, Tokyo, Pattaya, Bali, Taipei. Families too are searching to alternative off the beaten path and less crowded destinations this year compared to 2019’s Tokyo, Bangkok, and Okinawa Island hot spots. Instead, this year’s wish-lists are led by Taiwanese destinations Hualien and Taipei, with Bangkok taking third spot.

Group travellers have shifted their searches to countryside destinations of Hualian, Yilan, Nantou, Taitung, and Kenting for travel in the remaining of 2020, a shift from beach destinations like Batangas (Philippines), Pattaya (Thailand), Okinawa Main Island (Japan), that featured as the top three searches in 2019. 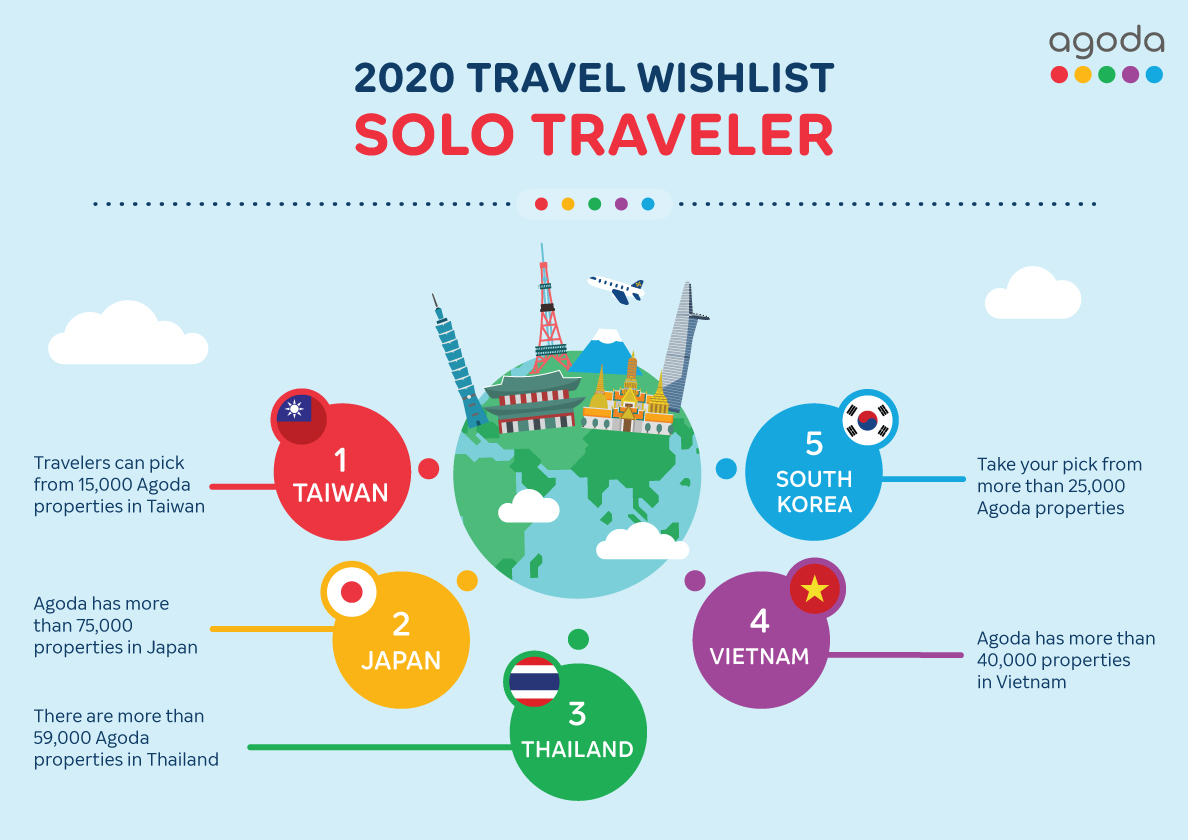 Interestingly, for solo travellers, Tokyo, Bangkok, and Taipei firmly hold their spots and emerge as the top searched cities in both 2019 and 2020.

Singapore, Bali, and London which were Solo travellers’ most searched destinations in 2019 are missing from this year’s wish-lists.

After spending some time with travel restrictions in place, travellers are shifting their travel searches away from well-known tourist destinations to lesser-known places and moving towards nature and beaches instead of city breaks.