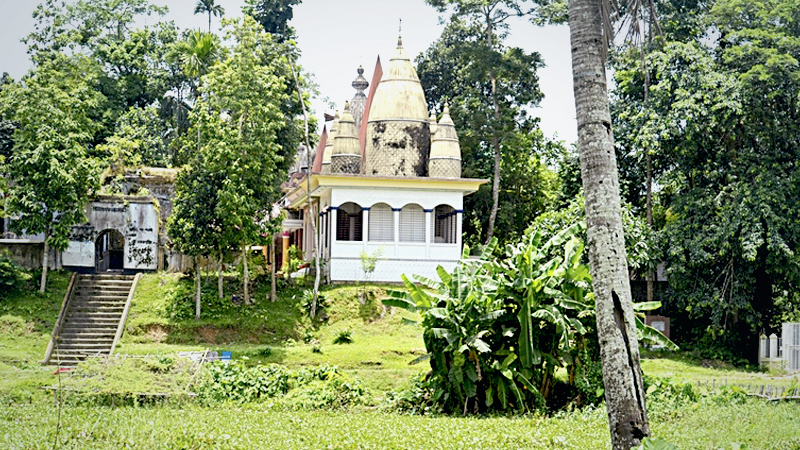 By The Daily Star

Beyond public knowledge, however, two more unrecorded ancient statues are kept in the historic temple.

During a visit to the temple in late June, the statues of a Dhyani (meditating) Buddha and a Garudashin Vishnu (Lord Vishnu sitting or riding on Garuda, a mythical bird-like creature) were found.

The Basudeva statue, depicting Lord Vishnu in Samapadasthanak posture in which the feet are firmly arid squarely planted, was mentioned in various journals while the two other statues remained unheard of.

In Achyut Charan Choudhury's book "Srihatter Itibritta", some publications of Bangladesh Asiatic Society, and a memorandum published by the temple in 2006 state that there is only the Basudeva statue in the temple.

But the expedition found all three statues are kept in the Sri-Mandir of the Panchakhanda Basudeva Angan and being worshiped.

Finding of the Dhyani Buddha proves the existence of Mahayana Buddhist while the Garudashin Vishnu is the only statue of its type to be found in the region.

Two neighbourng villages, Supatala and Nidhanpur, under Panchakhanda Pargana of ancient Srihatta, are very much known to historians and archaeologists. These places are crucial for understanding the ancient time of greater Sylhet.

In Nidhanpur, which is in the vicinity of the temple, seven copperplate inscriptions of early 7th century Kamrupa King Bhaskaravarman were found in 1912.

More than 200 Brahmins were made Jamindars through these copperplates.

Dwarkesh Chandra Nath, president of Basudeva Sebak Sangha, the managing authority of the temple, said, "In the copperplates, seven percent of total land granted was meant for some religious rituals related to idol worship. The temple might have been established Centring the rituals."

Several ancient idols were found in ponds of Supatala village.

The Dhyani Buddha statue was found along with the Basudeva and the Mahamaya (Durga) statues in the early 19th century while digging a pond of Durgadalai's house in Supatala.

In the book "Srihatter Itibritta", Achyut Charan Choudhury cited that Durgadalai was an employee of the last Jaintia King Rajendra Singha.

Durgadalai gifted the Mahamaya statue to the king while Basudeva statue was restored in the temple. These happened before 1835 as the king died that year in British captivity, the book mentioned.

The miniature statue of Buddha seated and meditating is 4 inches tall and 2.5 inches wide. The face and back are damaged and left hand is broken.

Though the left hand is broken, seeing the pose of right hand, they opine that the hands are posing as a representation of Dharma Chakra (Wheel of Dharma).

According to the Buddhist explanation of Panchatathagata, this pose is the Vairocana, the principal deity or mediator. Other Dhyani Buddhas are Amoghasiddhi, Amitabha, Ratnasambhava and Akshobhya.

Swadhin Sen said it might be of 8th-12th century while Mosharraf Hossain opine of 12th-13th century.

Historian Himadri Das Purkayastha said, "During 9th-10th century, Mahayana Buddhists, particularly of Vajrayana belief, were influential in greater Sylhet. Finding the statue is the archaeological proof of the Mahayana Buddhism's practice in the region".

The Garudashin Vishnu statue was found in 1982 while digging pond of the temple.

According to Hindu Triad or Great Trinity, Vishnu represents goodness and preservation.

In ancient and medieval period, Vishnu statues are found in different forms and names -- of different count of hands. His Basudeva forms are common in Bangladesh, while the Garudashin form is rare.

Archaeologist Mosharraf Hossain said, "Among more than six hundred Vishnu statues found in Bangladesh, only seven are of Garudashin Vishnu. It's a rare antiquity. This particular statue looks older compared to others".

The statue is of 2.7 feet tall and 1.2 foot in width. The four handed statue clock-wisely holds club, wheel, conch and lotus.

In this statue, Vishnu is seated on the Garuda with his feet on the hands of the mythical creature. The Garuda is posing to start flying with one leg on top of lotus and another in the ground with bended knee.

Niru Shamsun Nahar, former keeper of Bangladesh National Museum, said, "The statue doesn't look still, but very lively. Carved in stone with excellent efficiency and of exact ratio. It's a work of a master sculptor".

"A unique sculpting method flourished in Bangla-Bihar region by 8th-13th century and 10th-11th century as the golden era of sculpting. This statue represents the features of the golden era and I think it's of that era," she said.

THE STATUES: IMPORTANCE AND CONSERVATION

As the Panchakhanda Basudeva Angan is dedicated to lord Vishnu, the Garudashin Vishnu statue is being worshipped along with the Basudeva statue.

The Buddha statue is also being worshipped as an idol of Narayana.

Swadhin Sen said, "The idols are very important in terms of their find-spots and location, as the Nidhanpur copperplate inscriptions are found in the area.

"The time of issuance of the inscriptions and the stylistic date on these idols are not same. Two idols of Vishnu belong to a later date, tentatively to 11th-12th century. They, however, points at the continuous occupation of this area of Barak-Surma Valley from 8th-12th century."

In contrary to the practice of collecting and displaying such religious statues in the museums, he said, "These are an essential part of living religious traditions as they are being worshipped. These valuable archaeological objects must be kept in the temple and their ownership by the local community must be protected."

[Tarun Sarker is a freelance journalist who writes for The Daily Star. Translated by Dwoha Chowdhury]