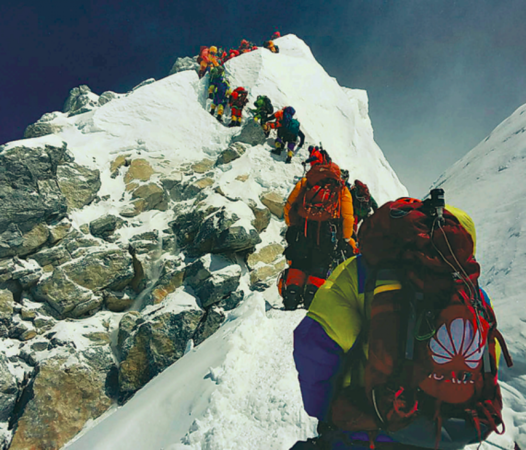 In recent years summit hopefuls have been growing since the tragedy on the mountain in 2014 and its closure following the 2015 earthquake.

A total of 6,507 mountaineers have climbed Everest from the Nepal side since Tenzing Norgay Sherpa and New Zealander Edmund Percival Hillary first set foot atop the world's highest peak in May 1953.

This and other figures are contained in the latest annual mountaineering statistics published by the Tourism Ministry on Tuesday. Among the 6,507 summiteers, 471 are female, with Junko Tabei of Japan being the first to make it to the top in 1975.

The 8,848-metre (29,028 feet) Everest straddles Nepal and China and the summit can be reached from both countries. It costs less to climb from the Chinese side since the royalty is less than Nepal’s $11,000 per person and also because there is a motorable road up to the base camp.

Nepal’s Tourism Ministry started collecting details of events on Everest dating from 1922 when seven Sherpa climbers died in an avalanche, becoming the first reported deaths on the tallest mountain in the world.

This year, Covid-19 kept all expeditions away, the second time in recent years. There were no expeditions in 2015 following the April earthquake.

Last year was significant in terms of records set on the world’s tallest peak. According to the ministry, there were five record-setting events for 2019.

On May 22 and 23, a total of 223 and 212 climbers reached the summit, which has been recorded as the highest and the second-highest number of climbers on the top of Everest on a particular day.

That year, the government issued a record number of permits, leading to 'traffic jams' on the icy route to the top of the world. Also, 10 people died, the highest death toll in four years.

Kami Rita Sherpa climbed Everest twice within a week, on May 15 and 21, giving him the distinction of having made the highest number of Everest ascents in the world–24.

The ministry said that the Sagarmatha Height Measurement Expedition 2019 team, led by chief survey officer Khimlal Gautam of the government of Nepal, climbed Everest on May 22 and installed scientific equipment on the summit. The government is yet to announce the height of Everest.

Nirmal Purja has climbed all 14 mountains above 8,000 metres in the record time of 6 months and 6 days and became the fastest person to do so.

Ministry records show that Mingma Gyabu Sherpa climbed all 14 mountains above 8,000 metres at the age of 31 years, becoming the youngest person to do so.

The success rate of climbers has been improving since 2016. A total of 451 mountaineers, including 197 foreigners, reached the top of Everest in 2016 after the peak saw no climbers in 2015, the year when Nepal was hit by a devastating earthquake that killed nearly 9,000 people. Quake-triggered avalanches killed 20 climbers.

On April 18, 2014, there was an avalanche near Everest base camp which killed 16 Nepali guides. Rescuers pulled out 13 bodies and the remaining three were never recovered as search and rescue operations were called off due to too much risk.

The first post-avalanche ascent took place on May 23, 2014, when Chinese climber Wang Jing along with five Nepali climbing guides reached the summit of Everest. However, her ascent was marked by controversy as she flew over the Khumbu Icefall in a helicopter instead of crossing it on foot.

High-altitude climbing guides had cancelled all their planned expeditions to pay respect for their dead colleagues.

But Wang completed her climb with five guides that were arranged privately. The Department of Tourism had also issued the climbing permit as a challenge to the guides who decided to boycott the expedition. The disaster had brought a simmering tension between the government and the climbing guides as the government did not pay heed to their demands.

Following the disaster, the government had promptly announced a payment of Rs40,000 to the victims’ families to cover funeral costs. However, high-altitude guides and workers were angered by the government’s paltry handout offer which led them to intensify their protest.

In 2017, a total of 426 climbers, including 199 foreigners, made it to the top, slightly fewer than in 2016. The number of summiteers rose significantly in 2018 when 560 individuals, including 262 foreigners, reached the top. This record was broken in 2019 when a crowd of 644 mountaineers, including 280 foreigners, stepped on top of the world.

“As the allure of Everest has grown, so have the crowds,” said Ang Tsering Sherpa, former president of the Nepal Mountaineering Association. According to him, the number of Everest aspirants in Nepal started to swell from 2007 when China started issuing Everest climbing certificates stating the height as 8,844.57 metres while Nepal issued certificates saying 8,848 metres.

The lower height was not recognised by various international organisations, Sherpa said.

“It’s not expensive to climb from the north side, and the process of obtaining a climbing permit is also easy,” said Sherpa, adding that before 2007, the north face used to see a large number of climbers.

Nepal and China will be clearing any confusion about the actual elevation soon by jointly announcing the height of Everest.

“However, climbing from Nepal has become more adventurous, and people love it instead of just climbing the peak and going home, making the number of summit hopefuls rise every passing year,” he said.

He was referring to the fact that while on the Chinese side, mountaineers drive up the base camp, on the Nepal side the allure begins as they land at Lukla airport from where they have to trek 10 days to the base camp.

The situation next year, with the climbing season slated to begin in spring 2021, will depend on what turn the Covid-19 pandemic takes.

“There are inquiries,” said Sherpa. “Even though Everest will be open, there won’t be many climbers because of the economic factor. People don’t have money, and climbing Everest is an expensive affair.”

Foreigners pay $11,000 to obtain a permit to climb Everest and spend anywhere between $40,000 and $90,000 for the entire expedition. In 2019, the government earned $5.07 million in royalties from the issuance of climbing permits. Out of the total revenue, Everest accounted for $4.05 million.