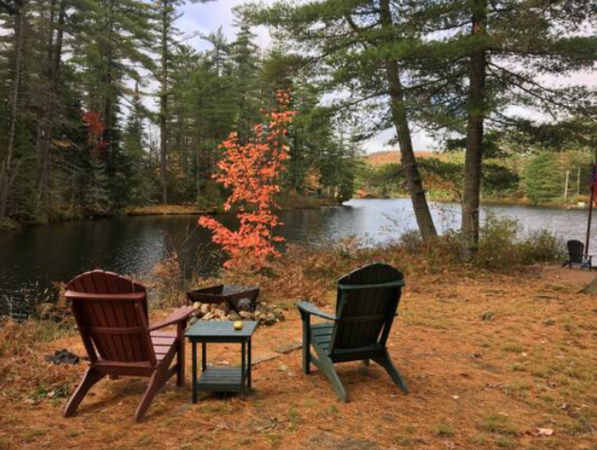 Looking out over Rainbow Lake, with Adirondack chairs in the Adirondacks. MUST CREDIT: Photo for The Washington Post by Debra Bruno

By Special To The Washington Post · Debra Bruno · FEATURES, TRAVEL

We were not the first to have the brilliant idea of heading north as an antidote to a sticky summer in Washington, D.C., where we endured sweaty, buggy cocktail hours with friends on our front porch, and watched far too many insipid Netflix series.

And we were not the first to realize that the outdoors was a good place to be during a pandemic. That fact was clear on our recent trip to the Adirondack Mountains, where we saw clusters of cars, many with out-of-state license plates, gathered around roadside trailheads like so many flies around a drop of honey.

The grand Adirondack Parkof Upstate New York is a place I had visited many times as a child and with my own children later on. With my parents and siblings, we stayed in white cabins with deep pine-green trim on Schroon Lake, taking rowboats out every day and squealing as the minnows darted around our feet in the water. When my own children came along, we took them to a former Great Camp (an upscale compound built for the rich during the Gilded Age and now in private hands), called the Wawbeek on Upper Saranac Lake in the High Peaks area. All of those visits took place at the height of summer, when children played outdoors until sunset and then toasted marshmallows by the fire.

This time we would be seeing the North Country in the autumn, at the peak of the fall leaves, when the loons were still calling out at twilight. A friend had invited us to stay in one of her family's cabins, normally rented for the season. The pandemic had changed their minds about renting, and we were happy to fill the gap.

We were staying on Rainbow Lake, 11 miles north of Saranac Lake and just 64 miles from the closest crossing at the Canadian border. In the early fall, the weather can range from 60 degrees and sunny one day to snowflakes the next.

The Adirondacks encompass a huge park of 6 million acres, as large as the state of Vermont, according to the Adirondack Council, a nonprofit group supporting the park's ecological health. Partly state-owned and partly private, it stretches from just north of the Albany region to the borders with Canada and Vermont. (For the record, Americans with no good reason to go cannot just pop over to Canada these days, thanks to coronavirus restrictions.)

But it was still a treat to be this far north. The scent of pine needles blanketing the ground, a cool breeze knocking the last of the maple leaves from trees, and the pink-tinged sunsets were enough to make us forget a summer where I'm pretty sure I power-walked through every alley in my neighborhood, listening to podcasts and avoiding other walkers like the world's biggest misanthrope.

One problem with choosing a hiking destination for our first real getaway since the coronavirus was that our bodies were more in pandemic shape than anyone's definition of "fit." That meant that taking on one of the 46 High Peaks was out of the question.

The highest mountains in the Adirondacks hit an elevation of about 4,000 feet minimum. Mount Marcy, the highest point in the state, tops out at 5,344 feet. Most of the High Peaks hikes, according to Adirondack.net, last from five to 18 hours, with many in the 10-to-14-hour range. Elena, the friend we visited, has done 25 of them. She's even done two in one weekend. She's also tried something called "tentless" camping. She loves winter, snow and ice. She plans to don her snowshoes and keep hiking through the winter.

Us, not so much. (See: Netflix.) But in the Before Times, I was a regular hiker, often logging eight to 10 miles on a Sunday with Wanderbirds, the local hiking club. I hadn't been hiking since March.

My task, then, was to find a just-right hike, and I found one that promised gorgeous views and not too much of a challenge. With more than 2,000 miles of well-marked high trails, the Adirondacks offers lots of choices. Baker Mountain is part of the Saranac Lake Six, a cluster that surrounds the lake. Many years ago, we had hiked another member of the Saranac Six - Ampersand - which was a very steep 2.7-mile ascent of1,775 feet. I remember it as surprisingly hard, especially on a hot summer day. We were younger then, yes, but more caught up in raising children and handling busy jobs than in training for a hike.

Baker Mountain is the baby of the bunch, with an ascent of just .9 miles and 884 feet. We parked and hit the trail, armed with masks, a backpack with water and lunch, and the sense of camaraderie one gets from pulling on and pulling off masks each time a hiker passed us going up or down. We were also rewarded with views that delivered a soul-soothing mixture of mountain peaks and golden leaves.

In the end, Baker Lake Mountain was the kind of hike that left time for a latte and a muffin at a coffee shop in downtown Saranac Lake, basking at a sidewalk table in the autumn sun, followed by another hike, this time circling Heart Lake at the Adirondak Loj, with a few of the surrounding peaks closer to ground level.

The Loj site, owned by the Adirondack Mountain Club, also rents campgrounds, as well as rooms in a rustic 1927 lodge, with shared bathrooms and a home-cooked breakfast. It's open year-round, but keep in mind that visitors from restricted states (currently up to 40 states and territories, including Maryland and Virginia) must quarantine for 14 days before taking a room.

Many hikers also use the Loj as a launching spot to climb Mount Marcy. One warning: The state's Department of Environmental Conservation recently asked visitors to consider skipping the High Peaks and trying another hike instead. In addition to overuse of the trails, a record number of people who have been hurt or lost on the High Peaks have needed rescues this year.

On a different day, we checked out the Visitor Interpretive Center at Paul Smith's College, six miles west of Rainbow Lake. Although the building was closed, the trails were open, and we followed a meandering circle hike called the Heron Marsh trail (2.65 miles, mostly flat). The center also keeps its trails open for winter snowshoeing or cross-country skiing. One couple we passed said they thought they saw a black bear, but our wildlife sightings were limited to red squirrels and the occasional hawk swooping overhead.

Then the rain came, and we decided to save further hiking for another day. The area still had plenty to do, including the Lake Placid Olympic Sites (of 1980 Winter Olympics fame), where visitors can check out the museum, take a Cliffside Coaster bobsled down Mount Van Hoevenberg or try a zip line.

But we opted instead for a fascinating historic spot: the John Brown Farm State Historic Site. And yes, his body lies a-mouldering in the grave right here, next to an enormous boulder, just 10 miles from Lake Placid. The museum there is open, and we stared for a long time at photographs of the abolitionist with his wild eyes. Surrounding a statue of John Brown and a young Black man is an exhibition called the Memorial Field for Black Lives, which lists, on black and white posters, the wrongful deaths of about 50 people by law enforcement officers. Creator Karen Davidson Seward, an artist and writer living in Saranac Lake, says the exhibit is "an appeal for police reform to end these heartbreaks." (The exhibit was set to close at the end of October.)

Another compelling display at the farm is a description of Timbuctoo, a Black settlement created around North Elba by abolitionist Gerrit Smith in 1846. Smith gave away 120,000 acres to 3,000 free Black men after emancipation. In fact, helping set up Timbuctoo was the reason John Brown moved to the region in the first place.

The goal was to give freed Black people property, which would then allow them voting rights. But the experiment failed, doomed by long upstate winters, bad soil, inexperience in farming and racism in surrounding towns. After a few hard winters, most of the settlers fled and left almost no trace.

With a little more time, we would have checked out the Saranac Laboratory Museum. The museum explains Saranac Lake's "unique role in history as a world-famous center for the fresh air treatment of tuberculosis."

Maybe another time. In the end, we decided that being immersed in the current pandemic was enough for us.