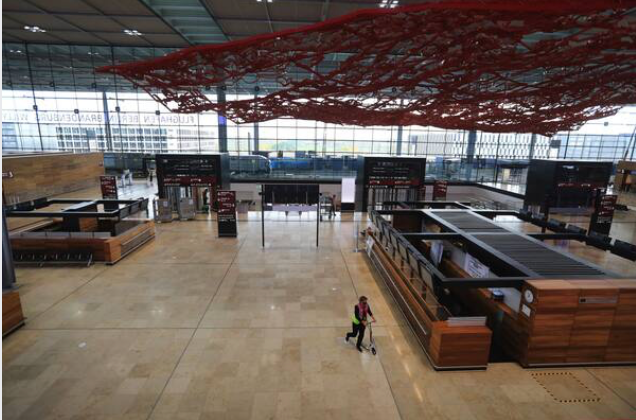 Berlin's new airport will finally welcome passengers after an eight-year delay, opening its doors just as fallout from the coronavirus hammers travel demand.

The limestone floors have been polished smooth, the ticket counters buffed and shops stocked with wares as the Berlin Brandenburg Willy Brandt Airport - known by its airport code BER - prepares for its inaugural flight on Saturday.

But the facility will just be a stunted version of the original plan. A second terminal won't open for now because it's not needed in the midst of the crisis.

"No one would build a new airport now," said Cord Schellenberg, a Hamburg-based aviation analyst. "But maybe that's the airport's opportunity - it's getting somewhat of a soft opening, giving authorities time to ensure all is running smoothly."

The airport's history is an embarrassing tale for Germany's exalted reputation for punctuality and engineering prowess. Construction started in 2006, and the planned launch in June 2012 was scrapped just weeks in advance, with moving trucks ready to roll and tickets issued.

Initially, authorities blamed the postponement on fire-safety issues, and claimed the hiccup would be fixed within a few months. But deeper planning disasters gradually came to light, and the opening was pushed back multiple times in the following years.

Defects included automatic doors that lacked electricity, escalators that were too short, and a smoke-extraction system so complex, yet ineffective, it was dubbed "the Monster."

The project's costs have tripled to more than 6 billion euros ($7 billion), and the fiasco contributed to the departure of Klaus Wowereit as mayor of Berlin - the colorful politician who coined the description of the German capital as "poor, but sexy."

The canceled opening wounded stores, restaurants and hotels nearby, and hit airlines including Deutsche Lufthansa AG and Air Berlin, which went bust five years later. In the meantime, Turkey and China built two much larger airports in Istanbul and Beijing in shorter spans than BER's delay.

Aside from forcing Berlin travelers to land at aging Cold War facilities, the long delay created other hassles. To keep air flowing and limit mold growth, empty trains had been running through a deserted station in the basement of the facility's glass-clad terminal.

Even with the pandemic, Berlin desperately needs a modern airport that reflects the city's status as a bustling center for technology startups and the capital of Europe's biggest economy. It also surpassed Rome as Europe's third-most visited city in 2014, increasing calls for a new facility.

The 1970s-era Tegel airport in the West - loved by many Berliners because of its central location and hectagon-shaped main Terminal, which allowed passengers to arrive straight at their gates - will close. Schoenefeld, the dour former communist facility adjacent to BER, will survive as its makeshift Terminal 5.

Despite being Germany's largest city, Berlin is a secondary aviation market. Most international flights are routed through facilities in Frankfurt, Munich and other European hubs. That's unlikely to change, even if authorities updated BER's plans to accommodate super-jumbo jets including the Airbus A380.

During the past months, the airport received all relevant approvals and completed a complex evacuation and fire exercise simulating a burning train. About 10,000 people armed with mock-up boarding passes ran tests for several weeks through Oct. 15, preparing personnel for everything from lost luggage to tarmac accidents and terror attacks.

The airport - located about 25 kilometers (15 miles) southeast of Brandenburg Gate - is designed to handle about 40 million passengers a year, which is close to pre-crisis levels. Its airy main hall features 118 check-in counters and dozens of shops and restaurants. The underground train station connects travelers to the city center in less than 30 minutes.

On Saturday, Lufthansa and Easyjet Plc planes will land to inaugurate the facility, with regular departures starting Nov. 1.

Besides the stylish interior and better shopping, there are real benefits from the long-awaited opening. A project is in place to integrate Tegel's terminal into a technology center and build homes for 10,000 people on its vast air field - easing the housing squeeze that has plagued the city in recent years.

Engelbert Luetke Daldrup, the site's project manager since 2017, who has worked diligently to rid the airport of defects, said he remains optimistic even in the face of the pandemic.

"This airport is a signal for a new awakening," Luetke Daldrup told reporters at the facility this week. "We're finally able to open a modern, spacious and safe infrastructure that's befitting a capital in the heart of Europe."