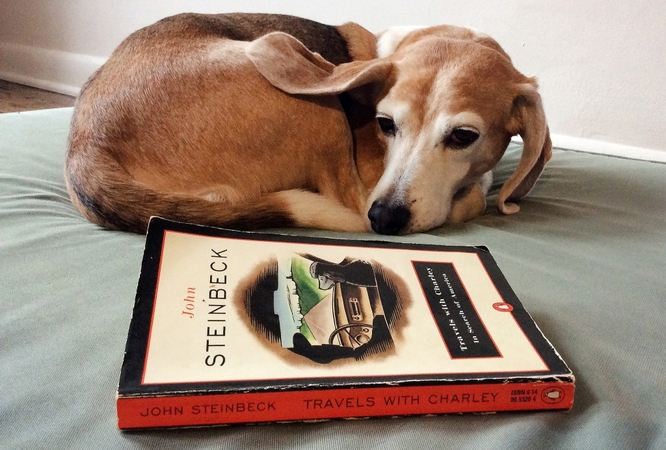 By Special to The Washington Post · Melanie D.G. Kaplan

Fourteen years ago, I decided to drive across the United States. This came after a childhood of cross-country rides in the back seat of my parents' car, visiting my grandparents in Southern California. But in 2007, when I was a full-fledged grown-up, my grandmother worried about this trip well before my departure. My mother wanted to know where I would sleep. My sister said she couldn't imagine driving all those miles by myself.

"Don't you wish you had someone there to share it with?" she asked.

Reminding them about my four-legged travel buddy did nothing to quell their unease. "I'm not alone," I said, time and again. "Darwin will be with me."

Perhaps I carried an extra air of confidence when I reiterated that statement about my co-pilot and explained that this trip was wholly different from a solo adventure. I had just read John Steinbeck's "Travels With Charley: In Search of America," and it spoke to me. Loudly.

"I took one companion on my journey - an old French gentleman poodle known as Charley," Steinbeck wrote. He described Charley as a born diplomat, expert sniffer and poor fighter. He was an early bird, a good watchdog and friend who "would rather travel about than anything he can imagine." The pair set off on their journey in September 1960.

Darwin was also a good friend - a sassy, independent beagle, occasional growler and regular howler who loved road trips second only to eating. In 2007, we traveled 8,800 miles in 30 days. Since then I've made the trip out West every two years, on average, always with a beagle - first Darwin, now Hamilton.

The surge of euphoria and pure bliss I experience on these long trips is unequaled in any other part of my existence. Over the years, when friends in Washington, D.C., bought houses out West and prepared to drive there with their dogs, I could barely contain my excitement. I fell just short of inviting myself to join them. The "blasts of a ship's whistle still raise the hair on my neck and set my feet to tapping," Steinbeck wrote, and he felt equally impatient to travel when he heard an engine warming or horse hoofs clopping. "I fear the disease is incurable," he wrote. I feel his pain.

"Travels with Charley" was published in 1962, the same year Steinbeck was awarded the Nobel Prize in literature. The book recounts his drive around the country in the autumn of 1960, years after publishing famous titles such as "Of Mice and Men" and "The Grapes of Wrath."

He lived in New York at the time and considered it "criminal" that an American writer writing about America didn't know his own country. At 58, he set out to answer the question: "What are Americans like today?" Wanting to avoid recognition, he went to great lengths to remain anonymous and self-contained, "a kind of casual turtle carrying his house on his back." He ordered a customized vehicle with a camper top - complete with a double bed, four-burner stove and chemical toilet. He named it Rocinante after Don Quixote's horse. Over 10,000 miles through 34 states, he was not recognized once.

Aching for a road trip and grounded at home in December, I reread Steinbeck's travelogue, slowly. I appreciated it anew, particularly his description of trip planning. He overpacked Rocinante with "tools enough to assemble a submarine," emergency foods, two rifles and a shotgun (although his hunting days were over by then), fishing rods, canned goods and what he estimated was four times too many clothes, blankets, pillows, shoes and boots. Thinking he might write, he packed a typewriter, paper, pencils, notebooks, dictionaries and a compact encyclopedia, noting, "I suppose our capacity for self-delusion is boundless."

Before the trip, Charley knew something was afoot - of course. He whined, paced and made a "damned nuisance of himself," while friends stopped by and spoke of their own hunger to move, no matter the destination.

The reason for my first cross-country trip was clear: a friend's wedding in Palo Alto, Calif. Subsequently, I cared less about the reason I was driving to the West Coast and found myself concocting motives to satisfy others: helping my grandmother move, covering travel assignments, dog-sitting for friends. Hammy, a trauma survivor who is a more bashful and tentative beagle than his predecessor, has become an equally enthusiastic traveler. He has now visited 44 states. Until the pandemic, when Hammy and I itched for a trip we never missed an opportunity to scratch.

As I reread "Travels With Charley," I chuckled, recognizing from every one of my trips the hesitation Steinbeck experienced as his departure date approached. "My warm bed and comfortable house grew increasingly desirable and my dear wife incalculably precious," he wrote. "To give these up for three months for the terrors of the uncomfortable and unknown seemed crazy. I didn't want to go. Something had to happen to forbid my going, but it didn't." He set off and was overwhelmed. "I wondered how in hell I'd got myself mixed up in a project that couldn't be carried out."

On my first day of driving in 2007, I left Washington and was overcome by fatigue in the first couple of hours. I stopped in Virginia for a nap, certain that I couldn't continue. Darwin seemed to understand that when I napped, she would stay alert, which she did from the passenger's seat. I woke up refreshed and pressed on.

Steinbeck headed north to Maine then turned west. He visited Niagara Falls for the first time and crossed through Minnesota and North Dakota, eventually visiting his sisters in Monterey, Calif., near his hometown of Salinas. Along the way, he fell hard for Montana, a state I've come to love. He wrote that if it "had a seacoast, or if I could live away from the sea, I would instantly move there and petition for admission."

In his travels, Steinbeck struck up conversations everywhere, often enticing strangers with the offer of coffee and a "dollop" of whiskey or applejack at his camper table. He talked to Americans of every stripe - sailor, waitress, veterinarian, student - covering topics as varied as race relations, mobile homes and politics. Steinbeck presented pages of dialogue, leaving some readers wondering how much was fabricated; he was, first and foremost, a novelist.

With his mind free for thinking, Steinbeck said, "I myself have planned houses I will never build, have made gardens I will never plant." At one point, he wondered how much energy in foot-pounds is expended in driving a truck for six hours. In long, quiet stretches, I've pondered similar puzzles, such as the engineering of road curves along a cliff. I've imagined utility bills and love letters inside mail trucks. More than once, I have written entire articles in my head.

Like Steinbeck, I drove roughly along the perimeter of the country. We both went through Badlands and Yellowstone national parks, and we both visited California's redwoods. I relished interactions with strangers - and still do. Darwin and I met a motorcyclist from Toronto, a saloon bartender in Deadwood, S.D., a Nashville-to-Alaska traveler with a leashed cat named Charcoal, and a man named Smooth in Cooke City, Mont., who shared his local recommendations on an index card. In my notebook, I jotted down snippets of conversations that made me laugh. I entertained myself by counting dozens of items and creating a Harper's Index-style list:

Some of the best writing in "Travels," unsurprisingly, is about Steinbeck's companion, a character whose presence we can easily imagine enjoying on a trip. In Maine, Steinbeck wrote: "The temperature lifted and it rained endlessly and the forests wept. Charley never got dry, and smelled as though he were mildewed." And in Wisconsin, parked next to cattle trucks being cleaned of manure, "Charley moved about smiling and sniffing ecstatically like an American woman in a French perfume shop."

As I sat on the couch reading recently, Hammy was curled up next to me in a tiny ball, his nose tucked under his back leg and tail. The book may have inspired me in 2007, but this time, I felt deeply connected to this traveling pair. When Steinbeck wrote about his whole body aching from the road, I suffered with him. When he grumbled about roadside food, I recalled the time I settled on a Chipwich for dinner, the best of several pitiful options. When the miles and fields and faces became a blur at the end, when Steinbeck acknowledged that the journey - which began before he left home - had ended while he was still on the road, the anguish was familiar.

"The road became an endless stone ribbon," he wrote. "My bed was unmade. . . . My stove was unlighted and a loaf of bread gathered mold in my cupboard. . . . I know it was cold, but I didn't feel it; I know the countryside must have been beautiful, but I didn't see it." Then, at last, Steinbeck was home.

When I return from a trip, it can take months before I want to travel any distance by car. (Hammy is ready much sooner.) Then, bit by bit, the longing returns. I flipped back to the beginning of the book and savored one of my favorite lines. Steinbeck wrote that a trip "has personality, temperament, individuality, uniqueness. A journey is a person in itself; no two are alike."

I contemplated the notion that a new road trip - unlike any other - awaited. The thought was comforting. I closed the book and snuggled closer to my co-pilot for warmth. Hammy sighed. I dreamed.