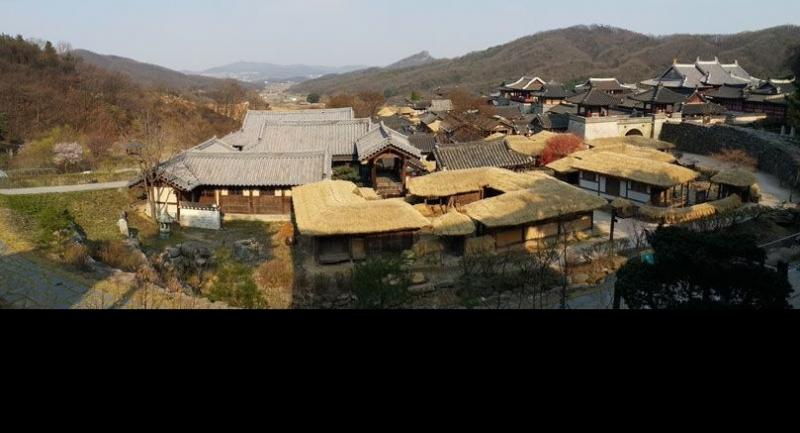 A panoramic view of the Yongin Dae Jang Geum Park, an outdoor film set for many Korean movies.

Spring has long been the best time to visit South Korea for Thais, not only because the cool weather offers a welcome respite from the searing heat back home but also because it bathes the country in lights and sights that are a real treat for sore eyes.

So it came as little surprise during a media familiarisation trip organised last month to bump into large groups of Thai tourists at several tourist attractions. For this reporter, one of the biggest delights of the trip was the chance to admire the cherry blossoms known as sakura in Japanese and beojkkoch in Korean that paint the capital Seoul and its surrounds a delicate pale pink. The largest concentration can be found at Incheon Grand Park, the city’s biggest park boasting wide walkways, a botanical garden, bicycle trails, a lake, sledding hill and a children’s zoo, and whose long line of cherry trees gives the Yeongdeungpo Yeouido Spring Flower Festival at Yeouido Park a run for its money. Both parks are packed this time of year with both local and foreign tourists. Seoul has many hip areas to visit and this time, I am taken to Songwol-dong Fairytale Village, a hidden gem in Incheon adjacent to Chinatown. This village is part of the government’s plan to revive dilapidated housing areas just as it has with Gamcheon Cultural Village in Busan. Arriving at the village’s vibrant rainbow-coloured gate, there’s a sense of travelling back in time to childhood and the world of fairytales and stories. Murals featuring a myriad of characters including the Disney Princesses, the Wizard of Oz, and the animals on Noah’s Ark, cover every surface – walls, lampposts, pipes, stairways and the ground. Equally trendy is Ikseongdong Hanok Alley, home to a wide selection of cafes decorated in both traditional and modern styles from which emanate the fragrant aroma of coffee and freshly baked bread and cheesecake. Interspersed with the coffee shops are restaurants and a few fashion boutiques. We rise early the next day to board a bus that takes us out of Seoul City to Yongin. This city of one million is home to South Korea’s most popular amusement and water parks Everland and Caribbean Bay, as well as to the Korean Folk Village and Yongin Dae Jang Geum Park, an outdoor film set owned by Munhwa Broadcasting Corporation. With the Korean Wave, or hallyu, still riding high, the country’s movie industry has grown into one of the world’s largest and busiest movie markets, as evidenced by the size of the park, which is so immense that visitors would do well to ask the ticket office for a map. I walk up the hill towards the traditional entrance and head to the studio set of the famous drama, “Dae Jang Geum” (“Jewel in the Palace”), about a small peasant girl named Jang Geum, who became a famous king’s cook and a doctor. The set is large, boasting an office, kitchen, giant spice storage jars, a supersize pantry, a pavilion used for sleeping and a room for servants as well as standees of Jang Geum and other characters. Continuing up the hill, I come across the complex featuring permanent sets. This has everything from houses, palaces, marketplaces selling vegetables and fruits, tools, musical instruments to paper umbrellas and tea sets, city walls, gates, gardens, ponds, even prisons as they looked in the Samguk, Goryeo and Joseon kingdoms. Among the dramas filmed here are such big names as “The Scholar Who Walks the Night”, “Empress Ki”, “Arang and the Magistrate”, “Dong Yi”, “The Moon Embracing the Sun”, “Jumong”, “Queen Seondeok”, and “Flower in Prison”. The Anyangru Pavilion used for “The Great Queen Seondeok” in 2009 sits at the top of the hill and offers a panoramic view of the whole complex. Leaving the park, we head to Yangsuri Strawberry Farm where we’re invited to pick the fruit and sample them as well as rice cakes and jam made of strawberries. After a much-needed night’s rest, we’re back on the bus, this time heading to Pyeongchang, site of the 2018 Olympic Winter Games. A popular film location, it starred in the popular K-drama “Dokkaebi” (“Goblin: The Lonely and Great God”) and is home to the ski resorts of Alpensia and Yongpyong as well as Woljeongsa Temple, which is located in Odaesan National Park. Woljeongsa Temple, meaning “Moon Vitality Temple” in English, sits on the eastern slopes of Odaesan and with thousands of needle fir-trees is a popular hiking spot. A stone bridge straddles the stream on the path to two temples, Sangwonsa and Seonjaegil. We pass through the splendid dancheong of the Ilijumun gate at the entrance of Woljeongsa and walk through a tunnel of colourful lanterns. The national park contains a number of important cultural heritage sites such as the octagonal nine-storey stone pagoda at Woljeongsa Temple, which stands alongside a seated stone Bodhisattva making an offering in front of the main worship hall. Other sights well worth admiring include Manjusri, the bronze bell, the wooden statue of a seated child at Sangwonsa Temple, and documents written during its restoration. Our last destination of the day is Yongpyong Ski Resort, which is hosting the three-day April Snow 2019. The event features a sledding competition, a hanbok (traditional Korean costume) experience and a Korean food workshop and has drawn several groups of Thai tourists easily identifiable by their excited chatter. I go sledding twice before boarding the cable car for the 20-minute ride to Dragon’s Peak. Alighting at Yongpyong Alpine Centre, the first thing I see is a picture from a scene of world-famous K-drama “Winter Sonata”, which aired more than 10 years ago.

It’s chilly outside the centre and the thrill of seeing snow but the breathtaking view from the summit of Balwangsan Mountain make the shivers worthwhile. - For package details, call the Korea Tourism Organisation Thailand at (02) 611 27312, or visit www.Kto.or.th and its Facebook and Instagram walls.