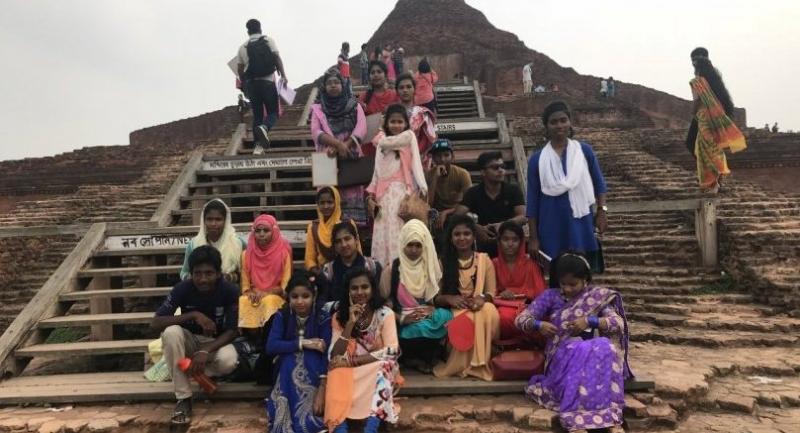 Teenagers are among the patrons of the Paharpur Buddhist Monastery.

Magnificent nature, a friendly culture and ancient wonders wait to be explored

EVEN THE most avid Thai globetrotter is like to give a blank stare when asked to name tourist attractions in Bangladesh.

But 26 journalists from 10 European and Asian countries came away from a recent familiarisation trip impressed by how much there is to see and enjoy there.

The Ministry of Civil Aviation and Bangladesh Tourism Board organised this first such excursion last month, showing off the South Asian nation’s beautiful culture, nature and opportunities for adventure. Teenagers are among the patrons of the Paharpur Buddhist Monastery.

India surrounds Bangladesh except for a relatively small connection to Myanmar in the southeast and the coastline on the Bay of Bengal. Three major rivers – the Parma, Meghna and Jamuna – converge in a massive estuary and what has been called the greatest delta in the world.

“Last year we had around 700,000 visitors, mostly from Thailand, China, Japan, India, Nepal and Bhutan,” said Mohibul Islam, assistant director of the Tourism Board. “We expect that number to increase.

“Bangladesh is a land of hospitality – the people are really friendly – a land of archaeological sites, the longest natural beach in the world, the world’s largest mangrove forest, a picturesque landscape, historic mosques and monuments, as well as a lot of forested hills and wildlife.”

Bangladesh’s amazingly rich history, culture and natural appeal were clear enough as I visited three World Heritage sites, the Paharpur Buddhist Monastery in Naogaon, the Sixty Domed Mosque City in Bagerhat, and that gigantic mangrove forest, which is called the Sundarbans. The Paharpur monastery in the northwestern district of Naogaon, is nearly 300 kilometres from the capital, Dhaka, meaning a six-hour drive. It is well worth the trek, though, being renowned as the country’s most spectacular and magnificent monument and the second-largest Buddhist monastery south of the Himalayas.

The monastery was built by Dharmapala Vikramshila between 770 and 810 AD, a fact inscribed on a clay seal discovered in the compound. It’s a large quadrangle with the elaborate main entrance on the north side.

The main central shrine, cruciform at the base, rises in three terraces to a height of about 70 feet.

The upper level is a massive rectangular central block. At the intermediate level there were originally two bands of terracotta around the perimeter, of which half remain in place. At the base of the shrine are more than 60 Hindu deities sculpted in stone. The Sixty Domed Mosque was built in the 15th century.

The Sixty Domed Mosque – Shat Gombuj Masjid in Bangla (Bengali) is in Bagerhat, about 200km southwest of Dhaka. It was built in the 15th century and is the largest mosque in the country and regarded as the most impressive on the subcontinent.

The mosque walls are of tapered brick in the Tughlaq style and there are 77 squat domes, with seven four-sided pitched Bengali domes in the middle row. The vast prayer hall has 11 arched doorways on the eastside and seven each to the north and south, providing ventilation and light, but it’s nevertheless dark and sombre inside.

You can still see one of the original pillars, blackened close to the base and otherwise also quite different from those erected during reconstruction.

Teenagers commonly come to pray and families take an interest in their valuable national heritage. The ancient pond Ghora Dighi is sacred – but handy for clean-ups too.

Behind the mosque is a vast sacred pond called Ghora Dighi where people stricken with disease once drank and bathed, believing its waters held the cure. The pond was designated a protected monument in 1986, but people still routinely do their dishwashing there.

Sundarbans National Park 140km from Kolkata Airport can only be accessed by boat and the ride takes about eight hours. This isn’t just mangrove central but also the natural habitat of the Royal Bengal Tiger, spotted deer, crocodiles, jungle fowl, wild boars and lots of lizards.

Where the land meets the sea at the southern tip of West Bengal lies the Indian Sunderbans, another area of impenetrable mangrove forest of great size and biodiversity.

The Sunderbans cover 4,264 square kilometres in India alone and are the largest tiger reserve and national park in India. Birdwatchers can glimpse rare species such as the Masked Finfoot, Mangrove Pitta and Mangrove Whistler. A fisherman taps the natural abundance of Sundarbans National Park.

The Sunderbans are criss-crossed by hundreds of creeks and tributaries. This is one of the most attractive and alluring places on earth, for most people a truly undiscovered paradise, drawing only about 2,500 visitors a week.

On the way there, we saw fishermen using trained otters to do the work for them, an ancient technique that is fascinating to watch.

Sharon Reyes, executive producer at Global Media Creators Productions in the Netherlands, summed up her perceptions drawn from the trip

“As an outsider, I think the Tourism Board has a lot of work to do, such as getting infrastructure built that will not only benefit the local community but also tour operators,” she said. “The board and the tour operator should decide exactly what they want to brand, their target clients, how they will market it and what areas they need to focus on more – the places that are ready to sell to the market.

“They should learn more about hospitality and do proper planning and in-depth research about each area. That’s very important before you showcase the place to foreign tourists. The potential is there, but the mentality should change. The big question is whether they are ready yet to change and accept other cultures.”

James Hubert Sebastian Dunn, an actor and journalist from England, said “Bangladesh is wonderful country. People are very friendly with smiling faces. I believe the country has a very bright future in tourism.”

Sander Groen, another journalist from the Netherlands, agreed.

“The country has great culture and nature and that wonderful beach,” he said. “I think Bangladesh has a lot of tourism potential. The people are so friendly, kind and helpful. I have to say that, of all the beautiful things I’ve seen. I admire the people most.”

SEE IT AT LEAST ONCE