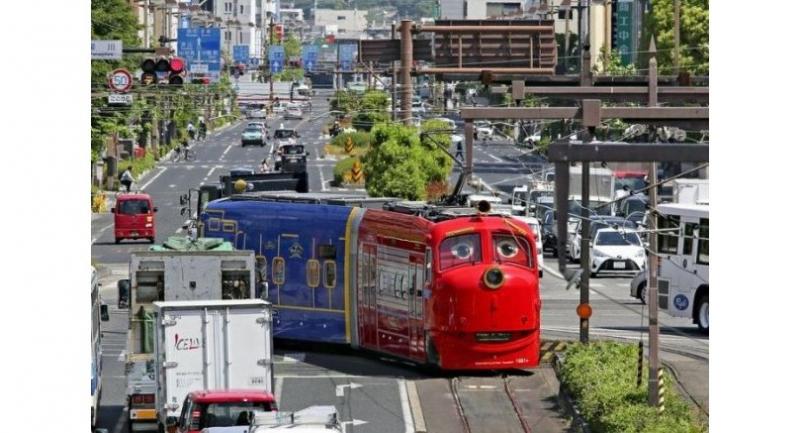 A streetcar designed to look like the character Wilson from the “Chuggington” animated series travels the streets of Okayama.

Themed trams are bringing fun to the street of Okayama

STREETCARS DESIGNED to look like characters from the British animated series “Chuggington,” which depicts the doings of anthropomorphic trains, are roaming the streets of Okayama.

Two cars that look like the Wilson and Brewster characters in the popular series have been used in the Okaden Chuggington attraction since it began service in March.

The streetcars bring cheer to the city’s residents, travelling the same roads as regular automobiles every day except Tuesdays.

“We wanted to turn the entire town into an amusement park,” says a representative of Okayama Electric Tramway Co., the Naka Ward-based company that has operated streetcars in the city since 1912. The interiors of the special streetcars were designed with the help of Eiji Mitooka.

The company obtained permission from the British company that owns the rights to the series and spent about 500 million yen (about Bt145 million) creating the two cars.

“The streetcars are meant to be ridden, not just used to get around,” the Okayama Electric Tramway representative adds. “We want to bring joy to the city and inspire the dreams of children.”

Eiji Mitooka, designer of many train cars including the Seven Stars in Kyushu, is an

Okayama native who was involved in creating the interiors of the cars.

Shoes are not allowed on board so children can play on the floors. The streetcars can carry 17 adults and 17 children.

The two cars are joined together to travel a 7.35-kilometre route that takes about one hour to complete. During the ride, “navigators” are on board to serve as guides and there are games to play.

Tickets – which include entry to the Okaden Museum, a memento and other items – cost 3,400 yen apiece for adults and 1,900 yen for children on weekdays. Prices are 100 yen higher on weekends and holidays. The museum includes Mitooka’s works and Plarail model Chuggington trains among its exhibits.

Registration with the Okaden Chuggington fan club on the Okayama Electric Tramway website is required to make reservations.

In mid-May, Mai Iida, a 29-year-old from Fukuyama, Hiroshima Prefecture, rode the streetcar in a party of four with her two-year-old son.

“We’ve been waiting for this day ever since we made the reservation a month ago,” she says. “It was a really fun experience. The quiz they did on board was also great.”