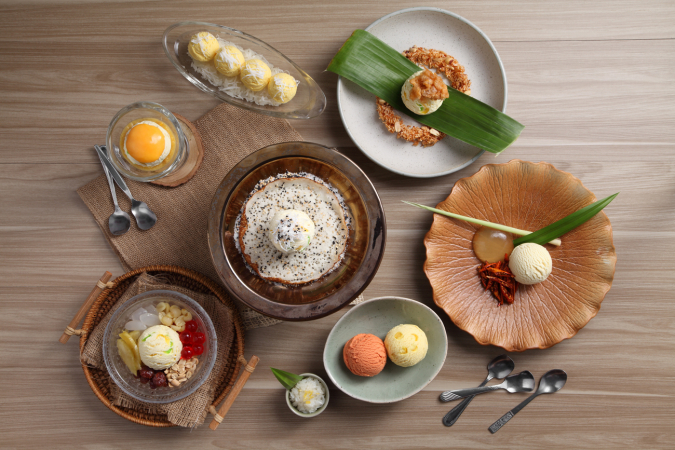 Mention “thipparot” to any Thai and the first thing that will come to their minds is the popular fish sauce brand. Yet equally as legendary as the salty condiment albeit not spelt the same way in Thai, is another Thipparot, the one that has been satisfying cravings for sweetness with its coconut milk ice cream for nearly five decades.

The ice cream parlour opened its doors in Bangkok’s Tao Poon area in 1970 and has chosen to stay put. Today, under the new direction of the third-generation operators, the brand is enjoying a sophisticated facelift, introducing fresh ideas while still maintaining its traditional recipes.

Located in Bangkok-Nonthaburi Soi 2, next to Tao Poon market and a short walk from MRT’s Tao Poon station, the 40-seat ice cream sanctuary is housed in a renovated, simply decorated shophouse with a white tile floor, marble tables, and a wooden counter and panels. Thipparot was one of the first to introduce such distinctive flavours as kati ruam mit (coconut milk mixed with jackfruit and lod chong or pandan flavoured rice flour droplets), durian, Thai tea, taro, corn, and lychee. Now it’s adding to these staples with 10 new fine-dining style dishes that merge its signature flavoured ice creams with Thai traditional desserts and snacks. The coconut milk ice cream is also a perfect match for the Thai snack of mee krob (crispy vermicelli with tamarind sauce) for Bt109, while the home-made soy milk is served with black sesame ice cream, also Bt109. Coconut milk ice cream is served on a bed of mixed dessert./Nationphoto:Korbphuk Phromrekha

“My grandfather created the ice cream recipes 49 years ago, long before there were ice cream parlours on Bangkok’s streets. His first flavour and the one that has remained the best-seller is kati ruam mit, followed by other options such as coconut milk mixed with sweet basil seeds, durian, black sesame and coffee. We now have 18 original flavours on offer as well as seasonal options like longan and sugar-apple,” says Saowalak Sophonthanawat, 30, adding that some 1,000 kilograms of kati ruam mit ice cream alone are produced every week. Last year, Saowalak and her partners decided to take things a step further and starting working with a pastry chef consultant to develop new ice cream-based dishes by merging them with Thai traditional desserts and snacks. The coconut milk ice cream is paired with Thai snack of mee krob and a scoop of fresh milk ice cream goes well with toasted and buttered bread./ Photo courtesy of Thipparot

“Our coconut milk ice cream is made from coconut sourced from Thap Sakae district in the Southern province of Prachuap Khiri Khan and has a creamy and aromatic flavour. The mon thong durian is used for our durian flavour while Thai tea is home-brewed from the leaves. Our ice cream doesn’t contain any additional flavoured powders, preservatives, emulsifiers or stabilisers,” adds Tritospol Wichitkul, one of Saowalak’s business partners, who works at an advertising agency. The original flavoured ice cream also gets a spicy makeover with a clear sphere of lemongrass jelly together with crispy fried red chilli to represent the Thai favourite tom yum. It’s priced at Bt119. The traditional summer refreshing treat of tang mo pla haeng (watermelon with dried fish flakes) is recreated and served with a scoop of fresh milk ice cream on a bed of custard mousse (Bt99). The 18 original flavoured ice creams go for Bt30 a scoop, except for durian which is priced at Bt40. The toppings, which include coconut milk sticky rice, nipa palm seeds, roasted peanuts, mango, lotus seed and star gooseberry in syrup, go for Bt5 a pop.

>>>Thipparot is located just 20 metres from the mouth of Bangkok-Nonthaburi Soi 2, next to Tao Poon market and a short walk from MRT’s Tao Poon station.