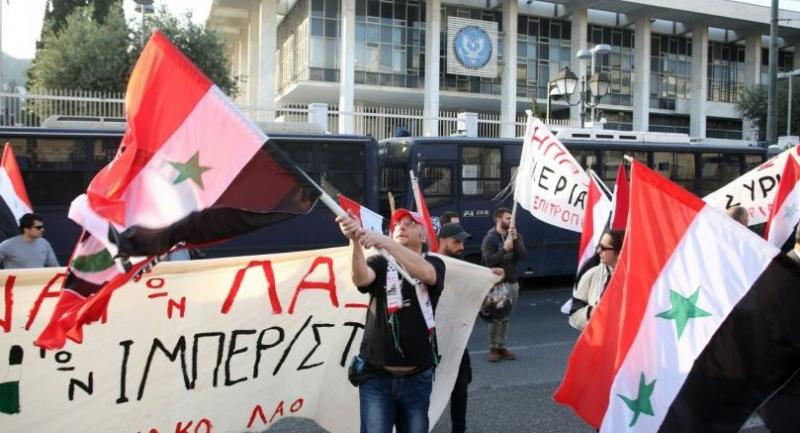 Anti-war movement members protested during a rally against the possibility of an attack on Syria outside the US Embassy, in Athens, Greece, on April 13.//EPA-EFE

Prime Minister Theresa May said the "limited and targeted strike" was part of joint action with France and the United States in response to Syria's latest alleged chemical weapons atrocity.

"There is no practicable alternative to the use of force to degrade and deter the use of chemical weapons by the Syrian regime," May said in a televised statement.

"It is about a limited and targeted strike that does not further escalate tensions in the region and that does everything possible to prevent civilian casualties," she said.

May said "a significant body of information including intelligence" pointed to Syrian government responsibility for a suspected chemical attack in Douma last Saturday.

She said the strikes would "send a clear signal to anyone else who believes they can use chemical weapons with impunity".

"This is the first time as prime minister that I have had to take the decision to commit our armed forces in combat -- and it is not a decision I have taken lightly.

"I have done so because I judge this action to be in Britain's national interest," she added.

Britain's defence ministry said in a statement that four British Tornado jets had fired Storm Shadow missiles at the base 15 miles (24 kilometres) west of Homs at 0100 GMT.

The ministry said the facility was "a former missile base... where the regime is assessed to keep chemical weapon precursors".

"Initial indications are that the precision of the Storm Shadow weapons and meticulous target planning have resulted in a successful attack," it said.

"Very careful scientific analysis was applied to determine where best to target the Storm Shadows to maximise the destruction of the stockpiled chemicals and to minimise any risks of contamination to the surrounding area.

"The facility which was struck is located some distance from any known concentrations of civilian habitation, reducing yet further any such risk," it added.

Defence Secretary Gavin Williamson said in the statement that the strikes were a "legal and proportionate" response to the use of chemical weapons by the Syrian regime.

May held an emergency cabinet meeting to discuss possible action on Thursday and there had been calls for the British parliament to be consulted before any air strikes.

Polls in recent days have shown public wariness of military intervention in Syria, with Britain still haunted by its participation in the US-led invasion of Iraq.

A YouGov poll in The Times conducted this week found that 43 percent of voters opposed strikes in Syria, with 34 percent unsure and only 22 percent supportive.

British lawmakers voted down taking military against Damascus in 2013, in what was widely viewed as an assertion of parliamentary sovereignty on the use of force.

But they backed action in Iraq the following year, and again in Syria in 2015, strictly limiting strikes to Islamic State (IS) group targets.

Britain continues to support the US-led coalition targeting IS jihadists in Iraq and Syria, and has conducted more than 1,700 strikes.

Labour leader Jeremy Corbyn had on Friday accused the government of "waiting for instructions" from US President Donald Trump on what to do over Syria.