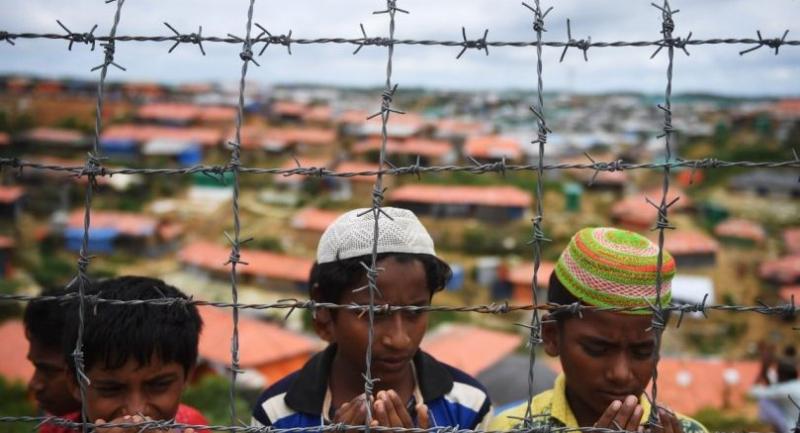 Rohingya refugees perform prayers as they attend a ceremony organised to remember the first anniversary of a military crackdown that prompted a massive exodus of people from Myanmar to Bangladesh, at the Kutupalong refugee camp in Ukhia./AFP

British Foreign Secretary Jeremy Hunt said Tuesday he would host talks at the UN this month over allegations Myanmar's military committed genocide against the Rohingya minority, warning the perpetrators must be brought to justice.

Hunt said he also wanted to visit Myanmar to meet with military leaders and Nobel Laureate Aung San Suu Kyi, the country's de facto leader, who has faced criticism for failing to speak out.

"Ethnic cleansing in whatever shape or form, wherever it happens, should never go unpunished and the perpetrators of these appalling crimes must be brought to justice," he told MPs.

A UN-backed fact-finding mission last month called for an international investigation and prosecution of Myanmar's army chief and five other top military commanders for genocide, crimes against humanity and war crimes against the Rohingya.

The leaders strongly deny the claims, and Hunt acknowledged that bringing those responsible to justice would be a "long hard road".

A referral to the International Criminal Court would need to come from the UN Security Council, but "at the moment it's not clear that there would be a consensus on the Security Council to deliver that," Hunt said.

However, he vowed: "We will leave no stone unturned to make sure the perpetrators are brought to justice."

"I intend to be convening a high level meeting of ministers (on) the margins of the United Nations General Assembly later this month," he said.

Hunt, who was appointed Britain's top diplomat in July, said he would be able to make a "stronger case" for action if he visited the country himself.

"It is important that I visit Burma/Myanmar to meet the military, to meet Aung San Sui Kyi, to see for myself the situation on the ground," he said.

He added that "a line has been crossed".

"This is the kind of issue where countries that believe in civilised values have to take a stand and have to make sure justice is done," he said.