The Surakarta administration in Central Java has finally decided to cover a cross-shaped road mosaic in front of the City Hall with paint following complaints from conservative Muslim groups.

“The administration has met with several religious leaders and came up with a number of solutions. But to prevent the polemic from dragging on, we decided to cover the mosaic with paint,” Surakarta deputy mayor Achmad Purnomo said on Saturday.

Previously, the Surakarta's Muslim Troops (LUIS) and the Surakarta Syariah Council (DSKS) questioned the design of the mosaic and demanded that the city administration review it.

“We have asked the Surakarta administration to evaluate and replace the cross-like mosaic with other motifs so as not to cause controversy and sectarian disputes,” LUIS spokesperson Endro Sudarsono said. 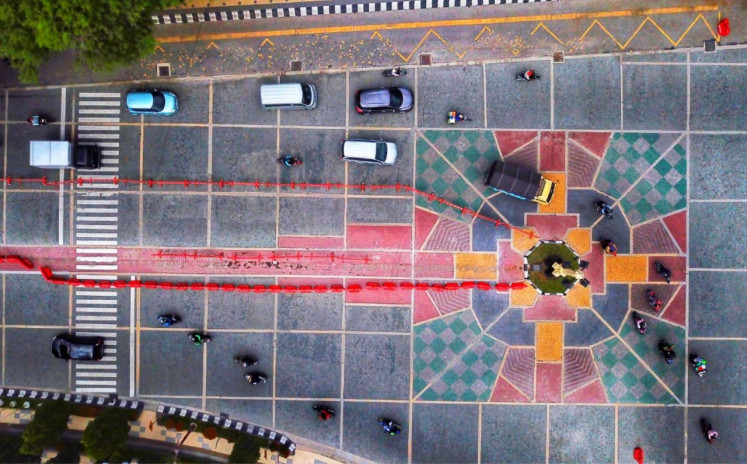 An aerial photo of the mosaic on Jl. Sudirman also went viral and caused controversy among internet users.

In response to the controversy, Surakarta Mayor FX Hadi Rudyatmo, who is a Catholic, said his administration never planned to have a cross-shaped road mosaic in front of his office.

“If I [had planned] a cross on a road, I would have blasphemed my own religion. A cross is very much respected by Christians. No cross is placed down below. All are placed up above.”

Achmad said that the mosaic was actually inspired by keraton (royalty) symbols of the Surakarta Sultanate and that its designer was also a Muslim. The art project was not finished yet, he added.

The administration, he said, decided to paint over it rather than change the mosaic by adding more andesite tiles. 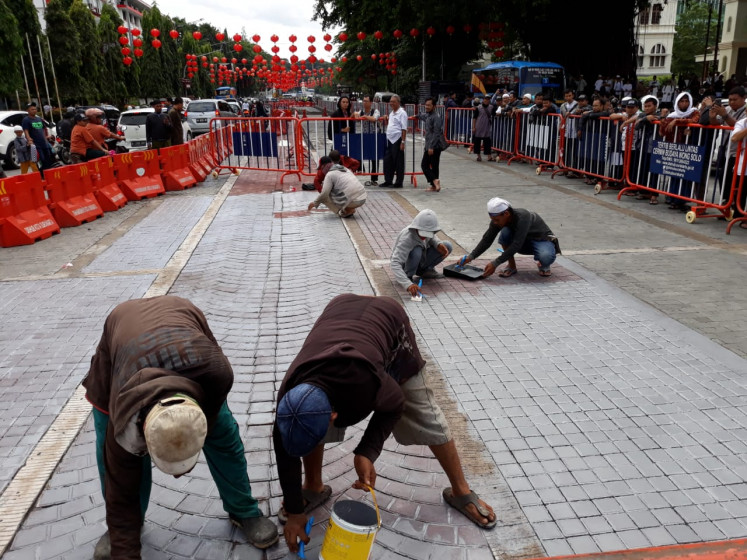 Workers paint over a road mosaic in front of the Surakarta City Hall in Central Java after Muslims groups complained that the street art resembled a Christian cross. (JP/Ganug Adi Nugroho)

Meanwhile, DSKS spokesman Endro Sudarsono said that the road mosaic could only be perceived as a picture of a cross. “We give the the Surakarta administration the discretion to choose how to change the cross. This is to avoid an incorrect interpretation and to make Surakarta conducive.”

It is the second incident in which Muslims have objected to the display of the Christian symbol in the past few months.

In December, villagers of Purbayan in Kotagede, Yogyakarta, cut off a wooden cross on a Christian’s grave, arguing that the religious symbol was not welcome in the village’s cemetery.