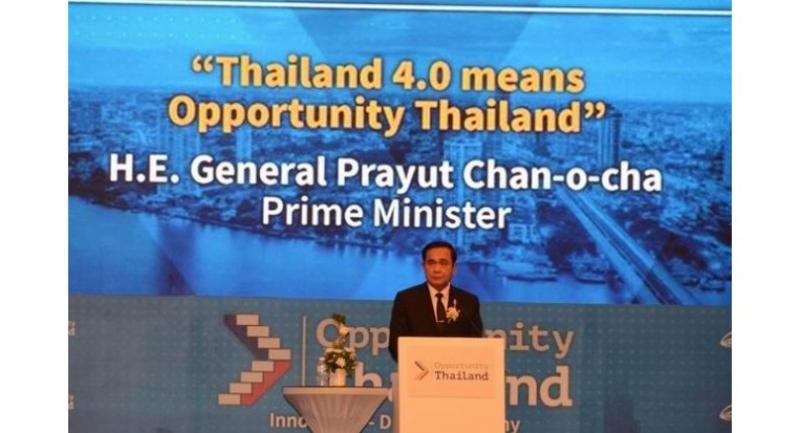 By PICHAYA CHANGSORN
THE NATION

THE FOURTH Industrial Revolution offers vast opportunities for businesses and Thais can reap its benefits to become richer than Singaporeans within a decade, Dhanin Chearavanont, chairman and chief executive officer of Charoen Pokphand Group, said yesterday.

“In 10 years, Thais will be getting richer. Perhaps … could be wealthier than the Singaporeans, per head,” he said.

At the “Opportunity Thailand” conference hosted by the Board of Investment, Dhanin praised the government for its “Thailand 4.0” initiative.

“I [take the view] that 4.0 will enter Thailand and will transform the face of the nation,” said the CP boss, referring to the so-called Fourth Industrial Revolution, also termed “Industry 4.0”.

“Don’t worry if we don’t have sufficient manpower, we can invite people to help.

“There are plenty of competent people in the world, [if only] Thailand can create an atmosphere and regulations that are supportive of talents.”

The government should remove legal obstacles such as land-use regulations that prohibit farming from locating in the “purple” zone reserved for manufacturing, to lower logistics costs and facilitate agro-industry businesses that, as well as the farmers, can also thrive in the 4.0 era, he added.

Kan Trakulhoon, director of Siam Cement Group, told the conference that knowledge was the “core” part of the Thailand 4.0 vision and that the country was suffering from a major shortage of it.

“It is necessary that we have our own knowledge base, not just buy in technologies,” he said.

International investors should pour their money into research and development to help create a “researchers’ community” in Thailand, he said.

Both executives shared their views on the rise of start-ups and the power of young entrepreneurs in the current high-tech age.

“The [CP] group is building a leadership centre. We must develop young men and women, at least 2,000 people each year, to be leaders, to go towards service businesses,” said Dhanin, who believes the services and logistics industries will boom in the high-tech era.

Kan said he had increasingly been convinced that start-ups were the new “engine for growth” since his youngest son just refused to work with SCG, but paid Bt400,000 to attend two cooking courses with the aim of launching his own start-up.

“This is the mindset of the new generation. There are enormous opportunities.

“The government may consider how it can facilitate” this trend, he said.

Kaoru Kurashima, corporate vice president at Ajinomoto, a Japan-based food and chemical company, said he would like to encourage the Thai government to direct more public relations at companies that have never invested in Thailand so that they can understand more about the benefits and advantages of the country.

Pierre Jaffre, president of Asia-Pacific for Airbus Group, told the seminar that Thailand was moving in the right direction by giving importance to digital technologies.

Joy Tan, president of corporate communications at Huawei Technologies, said that while Thailand had made good progress in increasing broadband access, there was still room for improvement in some areas including ICT (information and communications technology) investment per gross domestic product, ICT patents, and data-centres and cloud-computing investment per GDP.

Prime Minister Prayut Chan-o-cha, in his opening remarks, said the Thailand 4.0 scheme would help drive the economy and reduce inequality in society, and it required collaboration from everyone in the country, as well as the international community.

Deputy Prime Minister Somkid Jatusripitak said that amid the many risks and uncertainties clouding the world, “opportunities of the future” were arriving.

Asia including Thailand could be at the forefront of this change, thanks to their strategic location.