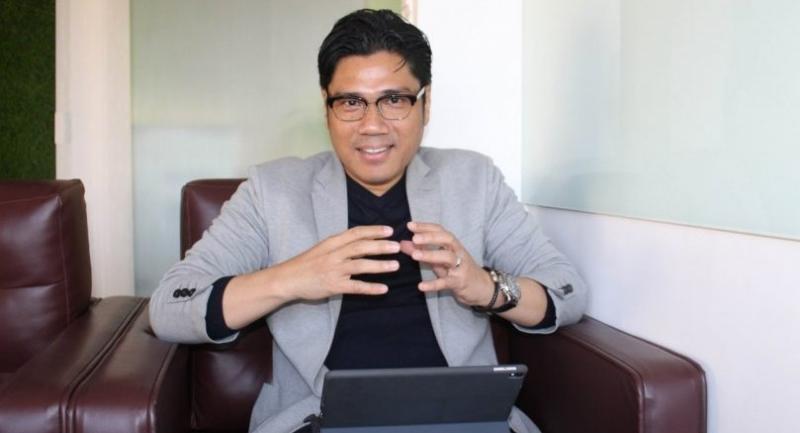 Aung Kyaw San, founder and managing director of Crown Education, at his office in Yangon (Photo- Khine Kyaw, The Nation)

“No matter how many foreign institutes there are in Myanmar, it will not hurt our business,” said Aung Kyaw San, founder and managing director of Crown Education.

“If we compare our business in 2008 where there was no private university to that of today with many private universities and colleges, our number has significantly grown to 20 per cent,” he said in an exclusive interview.

“Many countries around the world strongly encourage their youth to study overseas because their input and contribution play a critical role in nation-building endeavours to bring respective nations to the next level. Educational consultancy services are still growing in some developed countries, including Singapore, Japan and Korea. So, we do not see any difference in Myanmar.”

In the hope of future prospects driven by the nation’s stronger economy, Aung Kyaw San established Crown Education in 2005 after several years’ experience in international education. He seems pretty satisfied with the current 10 per cent growth on a yearly basis, and hopes to maintain steady growth over the next few years.

“Now we are sending around 350-400 students to overseas universities every year. Until the past few years, we were able to send an average of 150 students yearly. In the early years of our business, we could send less than 50 students annually,” he said.

The firm is now partnered with more than 150 foreign universities and colleges from the United States, the United Kingdom, Australia, New Zealand, Singapore, Thailand and Europe. Myanmar students are usually more eager to study in the West rather than in Asian countries, he said.

According to the executive, the majority of Myanmar students studying abroad are between 18 to 25 years of age. Business-related subjects, management, information technology, and engineering are the most popular specialisations among Myanmar students abroad. He also foresees substantially arising interest in political science and tourism management since Myanmar opened up the economy during the previous government term.

“When it comes to providing suggestions to those who want to study abroad, we would suggest following their own interest. This means we focus a lot on what students are keen on and what kind of profession they aim to choose in the future,” he said.

“Every specialisation has its own value. We need to change our mindset that medical doctors have more pride than other technicians and experts. For example, even if one studies history or geography, he can earn more or achieve greater success than medical officers. The only thing is to consistently and systematically study until he becomes a master of the particular topic he is keen on.”

Aung Kyaw San recommends studying such specialisations as oil and gas exploration, petroleum management, aircraft maintenance engineering and astronomy, though they are not widely popular among Myanmar students. He also urges youths to specialise in banking and finance thanks to a promising outlook for the financial sector.

“Here in Myanmar, we have abundant natural resources but we cannot take advantages of the natural blessings we possess. Selling our precious resources to foreign countries is not the correct way of using them effectively. Instead, we need to find the best ways [that we could] exploit our resources,” he said.

He stressed the importance of changing the mindset of Myanmar people, including parents who usually influence their children’s education.

“For example, thousands of Myanmar people have a wrong perception that studying psychology may lead to insanity. But actually, psychology is very useful in different kinds of professions. We need to encourage studying the subjects that can be applied to our working environment, and psychology is one of them,” he said.

To date, the firm has sent more than 3,000 students to study overseas, and nearly 80 per cent of the returnees have shown remarkable success in their respective fields. Currently, it mainly pushes for digital education and e-learning by establishing Royal Academic Institute, an accredited training centre in line with the UK’s educational standards. Educational loans will also be provided in cooperation with Aya Bank.

According to the executive, digital education costs much less than formal learning in other countries. It costs around US$10,000 (Bt317,000) to study in Singapore for one academic year while studying in the UK or Australia may lead to annual expenses of more than $30,000 a year, he said.