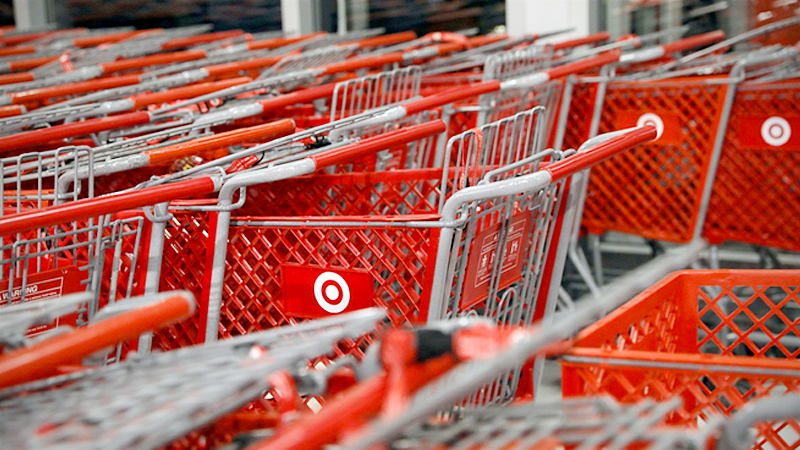 Empty shopping carts at a Target store in the Queens borough of New York on Nov. 28, 2019. MUST CREDIT: Bloomberg photo by Bess Adler.

There's an old saying in retail that despite all the bluster, not much really changes over the holiday shopping season: Those store groups that have been winning keep on doing so, while the losers continue to suffer.

Target Corp. just became the exception to this rule.

The big-box retailer has been a consistently strong performer over the past couple of years, but in the latest holiday season it stumbled badly. Same store sales in November and December rose by just 1.4 % - significantly below expectations. The shares fell more than 6 percent in morning trading.

Target seems to be suffering from issues across the market. But if the company - one of the more resilient of the bunch - is feeling the pinch, that bodes ill for weaker store chains, or those that have been less proactive in adapting to changing consumer tastes. The slip also suggests there may be limits to how much more its turnaround efforts can achieve.

Same-store sales in electronics fell by more than 6%. This wasn't helped by an uninspiring technology lineup - there was no one big standout game or gadget. Toys was also a difficult area, and there have been signs in Europe that demand is moving away from traditional playthings to tech.

But Target has made a big bet on toys, in order to capture the customers who would previously have shopped at Toys R Us. Although it said it gained share over the holidays, if demand is permanently shifting away from this category, this looks like a rare misstep. Moreover, given that Target has invested heavily - it pledged in 2017 to spend $7 billion over three years on in its stores, products and online offerings - it should be outperforming even in these more challenging categories.

The one silver lining is that both toys and electronics are low margin segments. So although Target cut its forecast of same store sales growth in the fourth quarter to 1.4%, from its previous expectations of as much as 4%, it maintained its profit guidance for the final quarter and the full year.

What's troubling about Target's performance is that while it could have made some changes in the run-up to the holiday - given the highly competitive landscape and Black Friday falling later - it is generally doing the right things. It's one of the few retailers investing in giving consumers the products they actually want to buy. In areas such as clothing, beauty and food, where it has been revitalizing its exclusive brands and overhauling departments, same-store sales rose.

Target, as mentioned, has also been spending on revamping its stores. That might be counterintuitive, but it is sensible. When consumers do want to go to a physical outlet, they want that to be a pleasant experience. And it hasn't neglected its digital offerings, particularly in areas such as click and collect, where customers order online but pick up their purchases at a store. While the digital performance was disappointing - up just 19% in November and December - same-day delivery options were up 50%.

Even before the holiday miss, Target was facing a challenge to maintain momentum. It is entering the final year of its big store refurbishments, and it will be coming up against difficult sales comparisons going forward. But a knee-jerk reaction, say curbing investment in stores, products, and digital, would be a mistake. It probably has more to go for in food, and can capture more sales from department stores and mid-market clothing brands.