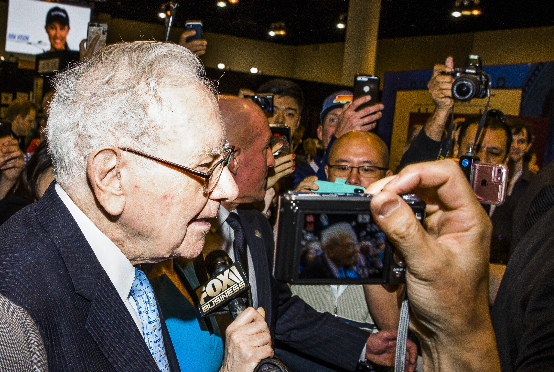 Warren Buffett says he's in the "urgent zone." It's the folksy billionaire's way of calling himself old. But even as Buffett approaches 90, the spotlight-loving chairman and CEO of Berkshire Hathaway isn't ready just yet to talk about who will run his giant company when he's gone. He still has more to say, and more to do - and that could make for an interesting year ahead.

Buffett's annual letter of intrigue arrived Saturday morning, a roundup of thoughts that the Oracle of Omaha has been publishing for six decades. It's evolved over time into what reads like a love letter to shareholders, to insurance float - the lucrative gift that keeps on giving at Berkshire - and to America as a whole, while taking the occasional jab at Wall Street's fee-giddy bankers and anyone who thinks Ebitda is an honest profit gauge. Lately, he's also lamented the lack of cheap takeover targets. The company's last splashy acquisition was in 2015, when it struck a $37 billion deal for airplane-parts supplier Precision Castparts. Berkshire had $128 billion of cash as of December, about the same level as the previous quarter and many billions more than Buffett would like to see sitting in a bank.

The letter, one of two major yearly events for Berkshire investors and Buffett groupies (the other is the shareholder meeting each May) has become more condensed in recent years. But more important to readers is what's written between the lines - hints of a major deal and signs that the world's most celebrated businessman is about to step aside. I suspect the former will come before the latter, though not even Buffett can truly know.

As mentioned, Buffett will turn 90 this summer, and his right-hand man Charlie Munger is 96. His letter contained an anecdote about a friend from his past who, at the relatively ripe age of 80-something, kept receiving requests from a local newspaper for biographical data so that it could prep the man's obituary. The request was marked "URGENT." "Charlie and I long ago entered the urgent zone," Buffett wrote, assuring shareholders that their company is "100% prepared" for the sad day of their departure and even sharing some details about his will. In my decade covering Berkshire, it's the most I can remember Buffett discussing what will happen when he's gone.

Over 12 to 15 years after his death, Buffett's class A shares will be converted into B shares and distributed to various charities; the executors and trustees are otherwise instructed not to sell any Berkshire stock, no matter what. That's putting a lot of faith in the next CEO, whoever it is.

Buffett's still keeping hush about his succession plans. But in a first this year, he said that shareholders can direct questions directly to his lieutenants, Greg Abel and Ajit Jain, at the May investor meeting. It's something I suggested Berkshire should start doing at last year's meeting, and indeed Buffett did hand Abel the mic in a rather symbolic, if impromptu, moment during the Q&A session. Not long ago, Abel's title was expanded from head of Berkshire Hathaway Energy to vice chairman of all the company's various operations - except for insurance, which is overseen by Jain.

Notably, this year's letter signaled a desire to invest more of the energy division's retained earnings to take on large utility projects. He said Berkshire's operations in the Omaha-based company's neighboring state of Iowa will be wind self-sufficient by next year thanks to investments in wind turbines, which have helped to keep rates lower than the competition as profits soar. Berkshire Hathaway Energy and BNSF - the railroad Berkshire bought in 2009 - together earned $8.3 billion last year, making them two of the biggest contributors to profit. Abel's rising profile, along with the emphasis on energy, leads me to wonder whether he's not only being groomed to take over for Buffett, but also whether Abel could soon make his own M&A splash.

Separately, Todd Combs, who manages some of Berkshire's stock-market portfolio, was recently tapped to be CEO of its Geico insurance business. Despite his dual-function sparking succession curiosity, he didn't get a shout-out in the letter.

Buffett's letter always includes a rant on the topics du jour, and this year's was corporate governance. He penned a section on the "vexing problem" of subservient corporate boards made up of overpaid aging directors, especially those who don't tap into their own savings to buy shares in the companies they serve. Of course, Berkshire is guilty of some of that. The average age of its board is 74 (including three nonagenarians). Buffett's celebrity and track record has also allowed him to skirt many of the corporate governance customs expected of other CEOs, such as quarterly earnings calls, more detailed filings and returning cash to shareholders. His successor may not be given so much leeway, especially not with $128 billion sitting around.

Reading that finger-wagging section, it was hard not to think of Boeing and General Electric - one company that was once seen as Buffett-investment quality, and another that in many ways tried to be like Berkshire. The downfall of each has been a devastating display of what can happen when leadership isn't held to account, and I imagine that's the sort of thing Buffett had in mind when he was writing. Then again, his investment in Kraft Heinz is almost the pot calling the kettle black. Kraft Heinz juiced Ebitda by irresponsibly under-investing in its business - which goes completely against the Buffett way - and all the while it happened under Buffett's nose. Berkshire is the largest shareholder, and while the Kraft Heinz holding is carried at $13.8 billion on its balance sheet, it had a market value of only $10.5 billion as of Dec. 31 (and is worth even less than that now).

Buffett only reveals what he wants to, and it's clear that succession is on his mind, as is his unending hunger for deals. Is it urgent enough for him to strike soon?