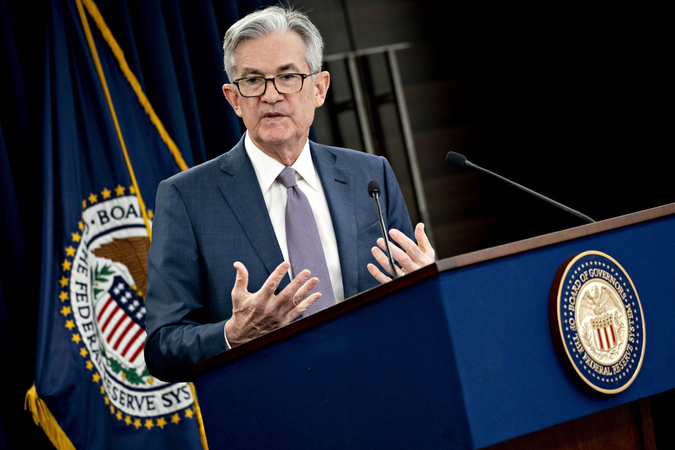 Jerome Powell, chairman of the Federal Reserve, during a news conference in Washington on March 3, 2020. CREDIT: Bloomberg photo by Andrew Harrer.

For the past few weeks, investors dared to dream of a U.S. government that worked hand-in-hand with the Federal Reserve to provide ample fiscal aid and get the world's largest economy through the coronavirus pandemic.

This "blue wave" scenario has come crashing down in the wake of Tuesday's election results. Yes, Democrat Joe Biden looks as if he has the advantage in reaching 270 Electoral College votes, but his party fell far short of expectations in the Senate, where Republicans are all but guaranteed to retain control, and it lost some seats in the House. Democrats alone won't be able to pass legislation to send money out to unemployed Americans, closed small businesses and strapped state and local governments.

At least for a day after his re-election, Republican Senator Mitch McConnell sounded amicable to compromise, even on the thorny issue of large-scale aid to states and cities. "Hopefully the partisan passions that prevented us from doing a rescue package have subsided," McConnell, who pushed for a much smaller package than the $2 trillion one that had been discussed by the Trump administration and Democratic leaders, said on Wednesday. "That's job one when we get back."

Yet even taking McConnell's comments at face value, it's hard to imagine Senate Republicans willing to do "whatever it takes" on the fiscal spending side to get the U.S. economy back to its pre-covid levels, especially if Biden is in the White House and can take credit for the rebound. More likely, the burden of stimulus will once again fall to the Fed and Chair Jerome Powell.

A prolonged presidential election and political gridlock are the backdrop to the Federal Open Market Committee's decision on Thursday, when Powell and his colleagues aren't expected to offer much in the way of new information. Recall that at the last meeting in September, they unveiled enhanced forward guidance that pledged to keep the fed funds rate unchanged in a range of 0% to 0.25% "until labor market conditions have reached levels consistent with the Committee's assessments of maximum employment and inflation has risen to 2 percent and is on track to moderately exceed 2 percent for some time." That followed Powell's August reveal of the central bank's new monetary policy framework, which would seek inflation that "averages" 2% over time, therefore allowing overshoots after periods in which it falls short of the target.

Heading into this week, it looked as if the biggest question for the Fed was whether it would step in to combat an aggressive steepening of the Treasury yield curve, with traders positioned for a large round of fiscal stimulus. The election aftermath took care of that question: 10-year yields fell 14 basis points on Wednesday, the most since March, to 0.76%, while 30-year yields tumbled by roughly the same amount to 1.54%. That's well within the central bank's comfort zone.

But judging by the reaction across other financial markets, it's clear traders are thinking beyond the votes and betting on the Fed having to shoulder almost the entire burden of resuscitating the U.S. economy. These investors most likely remember 2011 through 2015, when a tea party Congress brought the U.S. to the brink of default under President Barack Obama and forced the budget deficit to narrow each year in the name of "fiscal responsibility."

What happened during that period? From the time of the debt-ceiling showdown in 2011 through the Fed's first interest-rate increase of the cycle in December 2015, the S&P 500 Index returned 90%, or 15.8% on an annual equivalent basis. The 30-year Treasury yield fell from about 4% to 3%, dipping to as low as 2.22% along the way. Corporate bonds delivered strong returns. In other words, it was a great period for financial assets. Meanwhile, the average annual increase in U.S. hourly earnings was barely above 2% - hardly enough to keep pace with inflation.

This is the conundrum the Fed finds itself in now, less than 48 hours after the U.S. elections. Is it possible, given the current set of tools, for monetary policy to deliver broad-based economic prosperity? Or is it confined to primarily propping up asset holders and debtors, then counting on the wealth effect to make its way through the economy?

I've tackled this question from a number of angles in the past month with a fiscal aid package stalled in Washington. For one, the Fed could make a more explicit link between its bond purchases and fiscal policy initiatives to push lawmakers into more aid, but it's unclear whether Powell wants to open that potential Pandora's box. The central bank could also throw the doors wide open to its Municipal Liquidity Facility, lowering interest rates and encouraging more states and cities to take out a loan. But it seems keen for the facility to remain a last-resort backstop rather than a substitute for federal grants.

Put it all together, and it's hard to see how the Fed would make up for a smaller dose of fiscal aid on its own. Yes, it moved last week to sharply reduce the minimum loan size in its Main Street Lending Program to $100,000 from $250,000, potentially making it open to a broader swath of U.S. businesses. But with fewer than 400 loans made since the program became operational in July, and just 14% of Main Street lending done through the end of September for loans of less than $1 million, it's questionable at best whether it'll receive widespread interest. Powell himself has stressed that these businesses may need grants, not loans that they have to repay, to get through the pandemic. Also, as it stands, the program is set to expire on Dec. 31, as is the muni facility, though that could change at a moment's notice.

So that leaves the Fed with its tried-and-true monetary policy toolkit: Simply keep interest rates near zero for even longer and perhaps increase the size of its bond-buying program or have it target the long end of the yield curve. That should keep bonds well-bid, corporate debt deals flowing and equity markets elevated. As for fiscal aid, though, that's looking as if it still has to run through Capitol Hill.