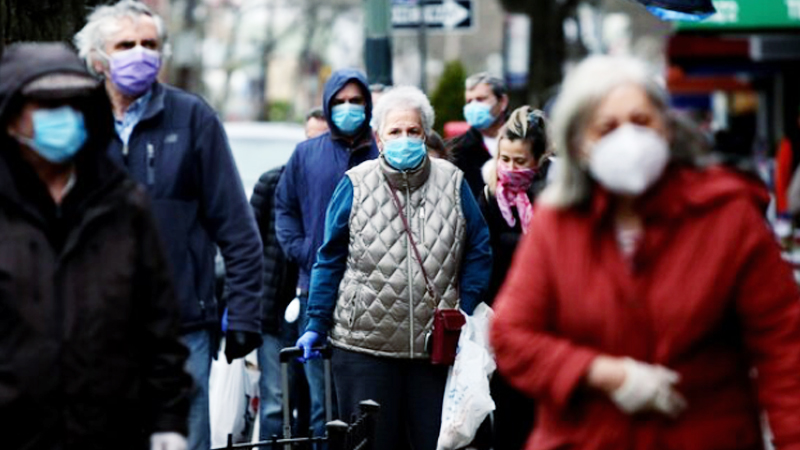 Masked people wait to pick up food from Biancardi's on Arthur Avenue in the Bronx, New York, on Friday, April 10, 2020. MUST CREDIT: Photo for The Washington Post by Yana Paskova

NEW YORK - Joseph "Papa Joe" Migliucci was the fourth-generation owner of Mario's, a 101-year-old red-sauce restaurant on Arthur Avenue in the Bronx.

Moe Albanese was known affectionately throughout Manhattan's Little Italy as "Moe the Butcher."

Both men - ages 81 and 95, respectively - were among the more than 2,000 New Yorkers who died citywide last week from the coronavirus pandemic. Statistically speaking, their deaths are insignificant. But try telling that to the city's tightly knit Italian American community, the nation's largest.

"It's stark and stunning," said Peter Madonia, the third-generation owner of Madonia Brothers Bakery a few doors down from Mario's. "It's so surreal but quite real. I've known Joe my whole life. I remember his mother and father and Uncle Clemente."

Arthur Avenue, which bills itself as the city's true Little Italy and "the good taste of tradition," is not just a street, Madonia said. "It's a collection of families who have been there for a century."

He and others described perhaps the one thing worse than being in the throes of this pandemic's epicenter: going through such heartache twice.

As New York state's confirmed coronavirus infections have now surpassed those in all of Italy (or any other foreign country) and the U.S. death toll now outnumbers that of Italy, Europe's coronavirus epicenter, Italian Americans here described their lives and their identities as imploding on both ends.

"I always considered myself as a bridge between these places," said Giorgia Caporuscio, a restaurateur in Manhattan. "Now it is a bridge of sighs. Empty Rome. Empty Venice. Empty Times Square. To see New York slowed down feels strange - but familiar, because I have been feeling it for weeks about Italy. Now we have all lost a loved one because we have all lost our city, our neighborhood, our home which we love."

Giulio Adriani, a pizza speakeasy chef from Rome who lives in "Italian Williamsburg" in Brooklyn, has been wrestling with his infection for almost two weeks. "No smell. No taste," he said, flagging his symptoms of covid-19, the disease caused by the novel coronavirus. "It seems like you're not even living. Even water has a taste. This does not even give you that. Just absence. Such terrible absence."

Yet pain and panic do not reign uncontested. As China set the bar for restrictions early in the pandemic, Italy set one for resilience - especially its balcony singalongs and daily applauses for essential workers mimicked worldwide.

"It's been a reflection of how we conduct life," added Adriani. "Such reflection is the Italian way of life."

Of the roughly 20 million U.S. residents who identify as of Italian descent, about 1 million are in New York - once their ghetto, now their hub.

It was here that Italian Americans anchored and acquired rapid cultural and political power in the 20th century. It was here a lowly tomato pie first sold by the slice for a nickel became the city's iconic street pizza.

And it was here an uneducated man from Campania arrived in 1926 to work "pick and shovel" labor. His name was Andrea Cuomo, grandfather of New York's governor, Andrew Cuomo, who informed New Yorkers on Monday that while the "worst is over," life here won't fully return to normal for another 12 to 18 months, when there is likely to be a vaccine against the coronavirus.

In the coming months, Cuomo said, leaders will have to relax restrictions on commerce and movement very slowly to give health experts time to evaluate what impact their actions are having on the spread of the virus. "When they say we have a vaccine," he added, "that is when it's over."

Along Arthur Avenue, boisterous banter and affection on stoops or in cafes have largely been replaced: nods over kisses and kaffeeklatsches tethered by windowsills like Ellis Island-era laundry. It hasn't been easy. Italian American life - with meals of 20 or 30 people, perpetual church services, soccer fanaticism, espresso-fueled chats, or simple neighborhood hangouts - is highly social. For many, response to the pandemic has made it hard to rewrite a script seemingly inked in their DNA.

"We see each other, we hug, we kiss. Even men," said Madonia, who was chief of staff to Mayor Mike Bloomberg. "Now it has stopped. It's like being in jail, social jail."

At Antonio's Trattoria, just off Arthur Avenue, most locals are ignoring owner Anthony Lancione's offer of 20% off on orders, preferring to pay full price - with generous tips. Recently, an anonymous order was placed for $2,000 worth of food for a local hospital. Last week, 20 pizzas, 20 calzones, and 20 chicken parm rolls went out to the emergency ward of another. And a retired firefighter sent a local firehouse a $500 Good Friday lunch of meatballs, penne vodka, chicken marsala and more.

Meanwhile, from her home in Queens, Lidia Bastianich, the celebrity chef, has spent her lockdown planting an herb and vegetable garden. She interrupted an interview with a reporter to break into song - "Terra Straniera" ("Strange Land"), a nostalgic tune Italian immigrants used to sing in their early New York ghettos.

"This virus cannot bury me because I am a seed. I choose to grow, to flower," she said. "My garden is an escape to normality, to seasonality, and to life. My tomatoes will never know they grew in crisis."

And perhaps it feels less like crisis with friends.

Frank Franz, a retired jack of all trades, recalled phoning his Arthur Avenue-area pharmacist late one night in the hopes of getting new pills for his mother, who was dying of cancer. The pharmacist picked up on his cellphone, halfway home to suburban Westchester County. Franz said he would swing by in the morning. An hour later, his doorbell rang: the pharmacist had driven back, picked up the pills, and made a house call. The bill would be paid later.

"How could I ever go anywhere else?" Franz asked. "How can a virus compete with that?"