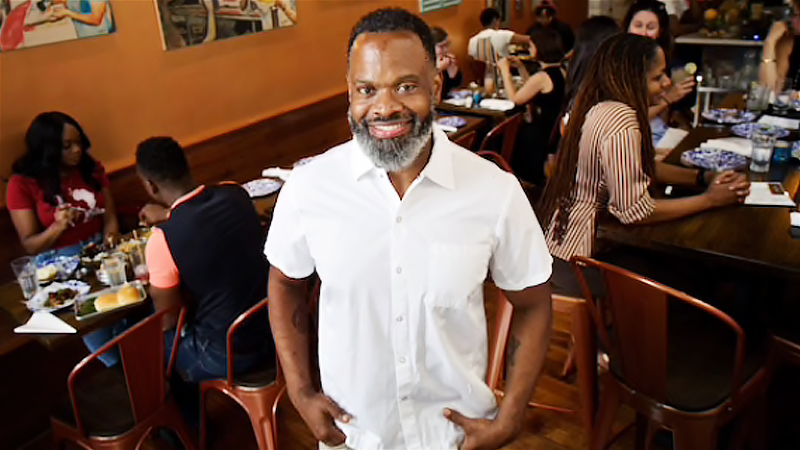 Cane chef and owner Peter Prime in the dining room of his H Street NE restaurant. MUST CREDIT: Photo by Deb Lindsey for The Washington Post.

Peter Prime's restaurant, Cane, opened last year in a prominent spot on Washington's H Street Northeast, near yoga studios, upscale condos and grocery stores. But securing the space for the eatery, where he serves dishes influenced by his native Trinidad and Tobago, wasn't always a sure thing.

When he and his sister were shopping around for a place to rent, Prime, a graduate of the French Culinary Institute and a veteran of some of the finest restaurants in Washington, interviewed with several would-be landlords.

Two of them turned him down, he says, suspicious because of his skin color about his plans to incorporate a rum bar into the concept. "They thought I was going to open an after-hours club," he says.

Such tales are common among black restaurant owners. The inequalities they face are many and well documented. Particularly when it comes to financing, black-owned small businesses are at a disadvantage. A 2017 report by the Federal Reserve showed that black-owned firms had a harder time getting loans than any other group: 47% of their applications were fully funded, compared with 75% of white-owned businesses' applications. And the coronavirus has further battered the restaurant industry, shuttering restaurants to diners and leaving customers without income to spend.

Long-simmering efforts to highlight black-owned restaurants have gotten fresh attention in recent days, as protests against police violence and racial injustice fill streets and screens and conversations. Lists of black-owned businesses - and restaurants in particular - have been assembled and circulated by food media and activists. In Instagrammable images and spreadsheets and Google documents, Facebook pages and Twitter threads, they offer people the names and addresses of eateries, city by city.

In Los Angeles, food writer Kat Hong over the weekend shared a Google spreadsheet of black-owned eateries across her city. With contributions from readers, the list now spans 200 establishments, from ice cream shops to barbecue joints. People have shared the searchable map of Chicago black- and brown-owned restaurants open during the coronavirus crisis created by the blog Seasoned and Blessed.

Their names might be iconic, like Sylvia's in Harlem, or Prince's Hot Chicken in Nashville, Tennessee. Others might not be so well known yet: Heard Dat Kitchen in New Orleans, DC Puddin' in Washington, 18th Street Brewery in Indianapolis, or Salare in Seattle.

Anthony and Janique Edwards, the married co-founders of the app EatOkra, which lets users find black-owned businesses in cities around the country, say they've noticed a leap in traffic over the past few days.

They hatched the idea for the app in 2016 when they had just started dating. He was a developer looking for an idea to make into his own project; she was just hungry. She had just moved to Brooklyn and didn't know the neighborhood. "We were sitting on the sofa and I was like, 'Let's get some food, what's around?' " she recalls. "I thought, wouldn't it be cool if there was an app to tell you about black-owned restaurants? And I said, 'Maybe you should create something like this.' "

The couple is now married with a young daughter, and EatOkra has listings for 2,600 restaurants around the country and 60,000 users. Last week, they released a new version of the app that includes food trucks and delivery options.

Janique Edwards says the protests have made inequalities more visible and have left many people looking for ways big and small to fight them. "People understand the difficulties the black community is facing on a totally different level and from many angles. In these past couple weeks they've seen it in economics, health care, police brutality," she says. "People are desperate to unify and combat these things."

Anthony Edwards said their app is meant to boost the profile of small black-owned businesses, many of which don't have the luxury of hiring a social media manager or a marketing director. Real estate costs are high, he notes. "So black businesses might be on the side street, where you can't depend on walk-in traffic," he says. "This lets you know that if you take a left instead of a right, you pass three black-owned businesses."

There's evidence that the economic impact of the coronavirus has hit black-owned businesses disproportionately. Studies have indicated that they rely more heavily on black customers, and unemployment among African Americans because of the virus is soaring. A May Washington Post-Ipsos poll showed that black Americans reported being furloughed and laid off at higher rates than whites.

The campaign to "buy black" is not new in the black community, notes Rachel Marie Brooks Atkins, an assistant professor and postdoctoral faculty fellow at New York University's Stern School of Business. She says many people who study black entrepreneurship are skeptical that even more widespread adoption can have a lasting impact, noting that the challenges facing black businesses are more fundamental than cash flow.

But she says that consumers can use this moment to take a deeper look at all their choices. "It's a chance to evaluate - who do you engage with commercially and why, and are there ways for that to better reflect your values?" she says. For a businessperson, that might mean thinking not just about who you order office lunches from, but also where you get office supplies and how you go about hiring.

"Reevaluating all those things together can make institutional changes," she says. "Buying black for your next meal? I don't think it's nothing, but it's not enough."

Anela Malik, a food blogger and activist in Washington who compiled her own list of black-owned food businesses to support during the coronavirus crisis, says most people recognize that they're not going to solve institutional problems with takeout orders. Still, she says, it's a way for them to do something, and at least put money into hurting businesses.

"Until we have radical social change, this is a concrete way people can recognize injustice in society and do something about it today," she says. "There should be space for people to do activism at all levels."

It's hard to quantify the effect of the recent push. Prime says his business, which is right now relegated to takeout and delivery because of the coronavirus, is brisk. He's doing as much business as before the shutdown, he says, though the margins are smaller after you account for the share that delivery services take and the cost of all that to-go packaging. Fellow chefs from other restaurants have been ordering staff meals from him in solidarity, he says.

And he says he's gotten support both tangible and not: "I have felt a lot of love from the restaurant industry and the community."