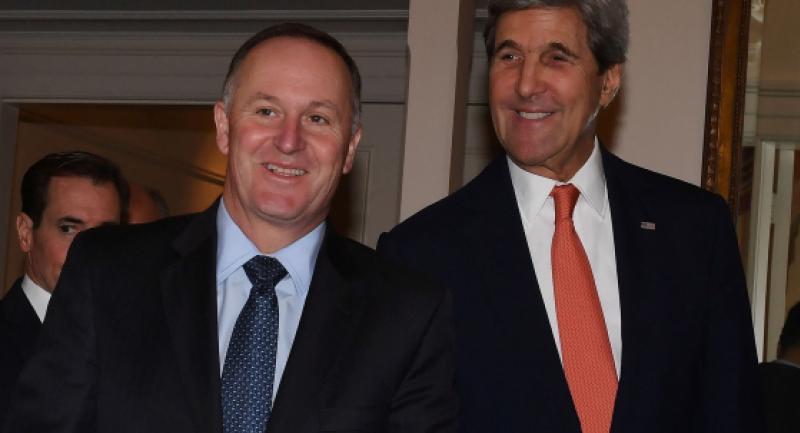 Leaders of TPP nations to review options with US President Obama

Leaders of the 12 countries that signed the Trans-Pacific Partnership (TPP) will meet on the sidelines of an Asia-Pacific summit in Peru this week to discuss a way forward for the free trade deal in the wake of the United States election.

Alan Bollard, executive director of the Asia-Pacific Economic Cooperation (Apec) secretariat, told The Straits Times that the leaders will review their options with outgoing US President Barack Obama.

US Secretary of State John Kerry on Sunday held out hope for the TPP going ahead with amendments, saying there are "tweaks here and there, and things that could be done, in order to address some of the concerns that people have."

"There's enormous room here for us to do a better job of it but still not to abandon it," he said at a press conference after meeting New Zealand Premier John Key in Wellington.

The TPP is seen as a landmark trade deal that sets standards on labour and environmental regulations, but observers see a bleak future for it under US President-elect Donald Trump, whose opposition to it was a key part of his campaign.

The pact's 12 signatories account for 40 per cent of global trade, and it would enter into force once six of them ratify it — but these six must include the US and Japan. Japan's Lower House has approved the pact, which is now before its Upper House.

Bollard said there is still time to decide on a course of action, as there is no deadline for ratification even though it cannot be implemented without the US. He added: "It can sit on a shelf for quite a while — it doesn't have an expiry date."

Leaders may have to consider renegotiating parts of the pact, but Bollard, a former governor of New Zealand's central bank, felt there was "negotiation fatigue" after protracted talks to conclude the TPP.

"It will be up to the members of the TPP to decide. Is it a sort of failed brand or not? Can they breathe life into it or find another form for it?" he said. "I don't think the other 11 economies are just going to abandon their expectations and general policy moves."

The TPP began as a pact by Singapore, Brunei, Chile and New Zealand to push forward on free trade across the Pacific, and found support among like-minded countries.

It is possible the remaining members could move forward without the US, but Bollard said it would be greatly diminished in this form.

National University of Singapore economics professor Davin Chor agreed, saying: "Without the world's largest economy and the key centre of corporate activity involved in this deal, this would be a very minor consolation prize."

The TPP's woes may mean more attention will be focused on the 16-member Regional Comprehensive Economic Partnership (RCEP), which involves all 10 Asean members plus Australia, New Zealand, China, Japan, South Korea and India.

Seven TPP countries are involved in the RCEP, which Chor noted might "present itself as a way forward, as an alternative arrangement centred on economies in the Asian region that have generally been open and outward-looking."

However, many of the 21 Apec economies are seeing a rise in anti- globalisation sentiment, and a key topic for the leaders in Peru will be on what this means for global trade.

Bollard believes the backlash against formal trade deals may lead members to conclude that Apec — which is non-legally binding, consensus-driven and takes incremental steps — is more crucial, as it works on a range of areas like food security and reducing inequality.

Added Chor: "It is much too early to make any predictions, given that the world is very much in a 'wait-and-see' mode to see how far Trump will follow through on his anti-trade rhetoric."