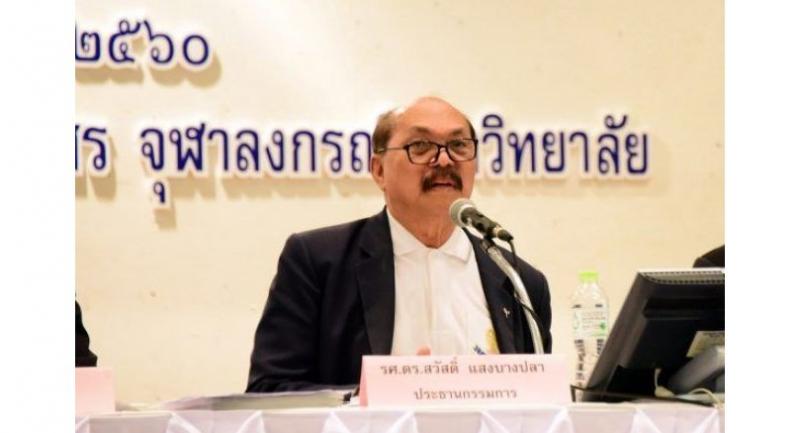 MORE THAN 160 individuals have been cheated in an alleged pyramid money scheme established by a former chairman of Chulalongkorn University’s savings cooperative, causing financial damage estimated at about Bt1.4 billion, police have said.

A court has already approved an arrest warrant for Assoc Prof Sawad Saengbangpla, who was previously chairman of Chulalongkorn Unviersity’s savings cooperative. Sawad allegedly lured more than 160 individuals to invest in a separate savings cooperative, saying the funds would be used to buy ticket quotas in government lotteries, police said.
Victims were promised lucrative returns of 1 per cent per month on their investment, but Sawad fled earlier this month resulting in dozens of victims filing charges against him, police said.
Pol Maj-General Sutin Subpuang, commander of the Crime Suppression Division, said the former university lecturer was facing embezzlement and related charges. More than 160 people have filed complaints, claiming to have suffered a combined loss of Bt1.4 billion in personal savings.
Police who are investigating Sawad believe he is hiding in the country.
In March, victims began to file complaints against Sawad, with one investor saying Sawad had persuaded him to take money out of the Chulalongkorn savings cooperative to invest in the lottery-quota cooperative about two years ago, promising returns of 1 per cent per month or 12 per cent per annum. The unnamed investor said he had invested a total of Bt3 million but he had not received any returns since March and he could not get in touch with Sawad.
In a separate case that made national headlines, a food-supplement vendor allegedly cheated hundreds of people who bought products online and were promised free holiday packages to Japan that turned out to be bogus.
Pasit Ariyalapit, better known as “Shogun”, was detained by police after more than a thousand people planning on going on the Japan trip were stranded at Suvarnabhumi Airport earlier this month after the promised chartered flights failed to materialise.
Meanwhile, Sutin said scams carried out on social media were a growing area of criminal activity with the latest case involving online sales of Milo Cubes on Facebook and Line, in which multiple victims were asked to transfer thousands of baht for products that were never delivered.