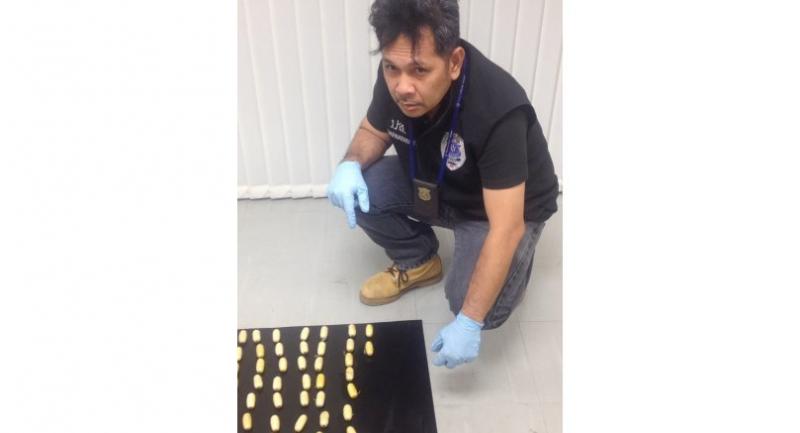 A 27-year-old woman from the Ivory Coast has been arrested on the Thai island of Phuket after an airport X-ray found more than one kilogramme of cocaine in her stomach wrapped in scores of small packets.

The woman was stopped by officials late Wednesday night at Phuket's international airport after landing on a flight from Doha.

An X-ray revealed more than 60 small packages in her stomach, filled with 1.2 kilogrammes (2.6 pounds) of cocaine, according to Sirinya Sitdhichai, secretary-general of Thailand's Office of Narcotics Control Board.

The drugs were likely bound for wealthy clients in Bangkok, he added.

"Unlike methamphetamine, cocaine and ice (crystal meth) are for a very niche group of rich customers," he told AFP.

He said drug traffickers based in West Africa routinely hire African or Asian woman as "mules" to smuggle narcotics into Thailand, a country whose porous borders and air links make it a popular transit stop for all kinds of contraband.

Smugglers often fly into smaller airports outside Bangkok and then travel by road to sell the drugs in the capital, he added.

Thailand, a country of roughly 68 million, has the world's sixth largest prison population thanks to harsh drug laws that were enacted more than a decade ago but have failed to dismantle the narcotics trade or dent addiction rates.

More than 70 percent of the kingdom's convicts are jailed on drug-related offences.

The proportion is even higher among the 39,000 female prisoners in Thailand, which jails more women per capita than any other nation.

Yet while couriers and other low-level smugglers are routinely arrested, authorities have struggled to take down kingpins and dismantle their trafficking networks.

The most popular drug in the kingdom is meth consumed in the form of caffeine-laced tablets known as "yaba", which means "crazy medicine".

The pill, and a more potent and pure version known as "ice", are churned out in drug labs in the Golden Triangle Zone where northern Thailand meets Myanmar and Laos. //AFP