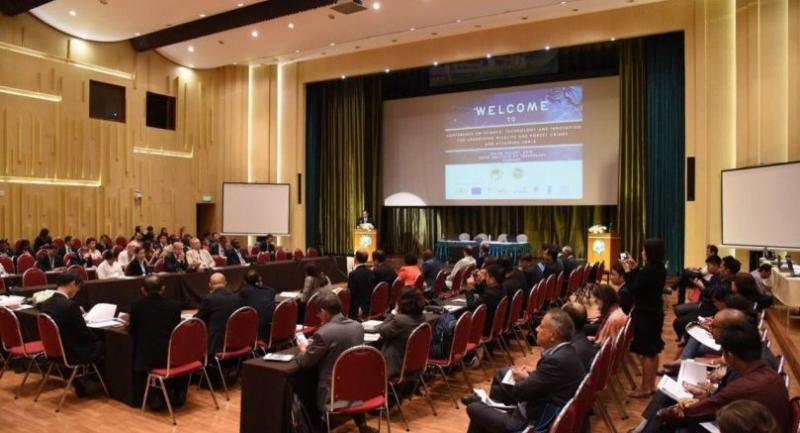 Cooperation among three major regions where illicit wildlife trades and trafficking are still rampant is being forged in an attempt to suppress the activities that are now seen crossing from countries in Africa to Asia.

Some leading anti-wildlife trafficking experts and law enforcers from 30 countries of Africa, South Asia and Asean are gathering at a two-day Bangkok “Conference on Science, Technology and Innovation for addressing Wildlife and Forest Crimes and Attaining SDGs”, being held at the Asian Institute of Technology until tomorrow.
The conference is aimed at providing a new platform for the three regions to meet and discuss the challenges in suppressing illicit wildlife trade and trafficking, which are estimated to be worth around US$23 billion (Bt748 billion) a year, or one-fourth of the value of all organised crime worldwide.
In Asean alone, the value is estimated at around $2. 5 billion a year, according to Clarissa C Arida, director of programme development and implementation at the ASEAN Centre for Biodiversity.
“Illicit wildlife trades and trafficking cannot be addressed by one or two countries, but by integration and cooperation. Countries should be brought together to suppress them. We need to be more innovative and effective,” she said, adding that the use of social media makes the crimes more challenging and has escalated in recent years.
At present, Asean has ASEAN WEN (the ASEAN Wildlife Enforcement Network), which sees Thailand as a centre, while South Asia has SA WEN (the South Asia Wildlife Enforcement Network).
Africa, meanwhile, has the Lusaka Agreement Taskforce, a joint seven-state force in operation to suppress illegal trades and trafficking in Africa.
The Lusaka Agreement Taskforce’s director, Edward Phiro, said wildlife trading had affected both Africa and Asia.
Africa is the source countries of the activities, and Lusaka is seeking partners to enhance cooperation in the fight against wildlife crimes, and wished to see this cooperation moving forward, he explained.
Thailand’s National Parks, Wildlife and Plant Conservation Department deputy director-general, Pinsak Suraswadi, described illicit wildlife trades and trafficking as a critical global problem that has affected many countries, and often the two are found to have links to other syndicated crimes.
As the problem is global, it is therefore almost impossible for countries to work alone, he said, adding that the Thai government has given importance to the issue, with the Kingdom being a lead country in Asean in dealing with the situation.
The conference, he said, is expected to provide a platform where the goals of the three regions are shared.
This new South-South Community under the so-called “Bangkok Initiative” would be further explored and introduced at the Asean Ministerial Meeting on the Environment in the middle of next year, Pinsak added.
Man Bahadur Khadka, director-general of Nepal’s National Parks and Wildlife Conservation Department, praised the attempt, saying it was the first time that the key bodies of the three regions had been brought out together, prompting a holistic view and approach in suppressing wildlife trades and trafficking.
“Seeing is believing, and we have never met one another before. The fruitful outcome out of this conference would be coordination and communication, as much as cooperation,” Khadka said, adding such intercontinental cooperation was hoped for.
The experts are also sharing their best practices in the region, as well as new technology and innovation such as wildlife-enforcement monitoring, wildlife forensics, and real-time monitoring systems like the Network-Centric Anti-Poaching System (NCAPS) cameras used in Thailand’s Thap Lan National Park to capture poachers.
The Bangkok conference is the third involving challenges in science and technology in wildlife-crime suppression.
The first was held in 2014 at UN University, and the second took place last year in Nairobi.