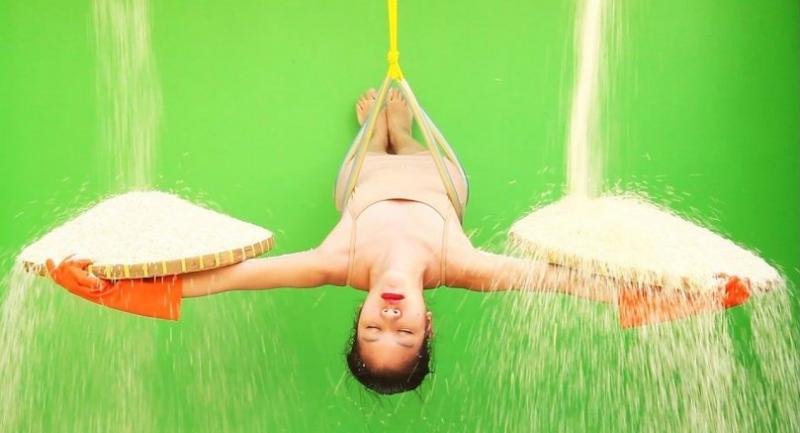 The Thai re-conquest of Venice

Among the contemporary art at this year’s Venice Biennale is “Krung Thep Bangkok”, an exhibition of drawings, sculptures, installation and video by Somboon Hormtientong, commissioned by the Culture Ministry’s Office of Contemporary Art and Culture to be the point man at the Thai art pavilion.

At the Thai pavilion, Somboon Hormtientong gives visitors to the Venice Biennale a fundamentally different view of the Thai capital in his show “Krung Thep Bangkok”. Photo/Facebook/Thai Pavilion 2017

Thailand is among 85 countries that have set up pavilions at the “Viva Arte Viva” Biennale that opened on Saturday and continues into November.
Christine Macel, the curator for the 57th edition of the Biennale, put out a call for art to reassure a world “full of conflicts and shocks”, and Somboon, 68, has responded with a paradoxical view of Bangkok utterly unlike the city perceived by tourists.

In a show curated by gallery owner Numthong Saetang, Somboon digs beneath the ultramodern surface to look at ordinary lives, mining the mundane activities and background stories and discovering a disguised beauty in each.
Typically Thai items feel like hidden treasures – a Buddha statue in an old wooden box, silver alms bowls viewed through glass, plastic baskets and stools from any marketplace fashioned into appealing sculptures.
In Somboon’s video, he’s seen exploring the city’s dynamic neighbourhoods and revelling in the culture.

Thailand has been presenting the national pavilion at the prominent Venice Biennale art festival since 2003.  Commissioned by the Culture Ministry's Office of Contemporary Art and Culture, Thailand brings more than than 20 leading Thai artists and curators to the festival.

Not quite part of the main festival, young artists Kawita Vatanajyankur and Anon Pairot are making their Venice debuts with a show called “Island in the Stream”, co-curated by Japan’s Yoichi Nakamuta and Italian Stefano Casciani. The two Thais, along with Korean designer Kwangho Lee and the Invisible Design Lab of Japan are among the emerging Asian artists featured in the Alamak Pavilion inside the historic Arsenale Docks.
One of Thailand’s hottest female artists, Kawita is showing her sensual, powerful videos. One depicts the 30-year-old artist getting intimate with shaved ice and various juicy fruits and plunging her head into a colander filled with eggs.
In another she looks like a yogi balancing heavy traditional baskets of rice, vegetables and banana as her slim body hangs in the air. Her experiments, testing her body’s limits, are playful but also often physically painful.
Taking inspiration from the Yugoslavian-born performance artist Marina Abramovich, Kawita counters the “passive” elements ascribed to Asian women through powerful studies of the ways in which women are viewed psychologically, socially and culturally.
Kawita makes dramatic use of luminous colours in her work, tapping into the digitally networked visual language of consumption and instant gratification.

Designer-artist Anon meanwhile has on view his best-known piece – a white, full-sized Ferrari woven from rattan, a hit at the 2016 Art Stage Singapore.
Taking cues from both rustic craftsmanship and modern industrial design, from hybrid culture and poetic concepts, the 38-year-old wants us to look deeper into the meaning of everyday objects.
Just as startling as his parody “Chang Rai Ferrari” assembled by skilled Thai craftsmen is a moving rendering of rice sacks through which Anon referenced fond family memories.
The Biennale continues through November 26.