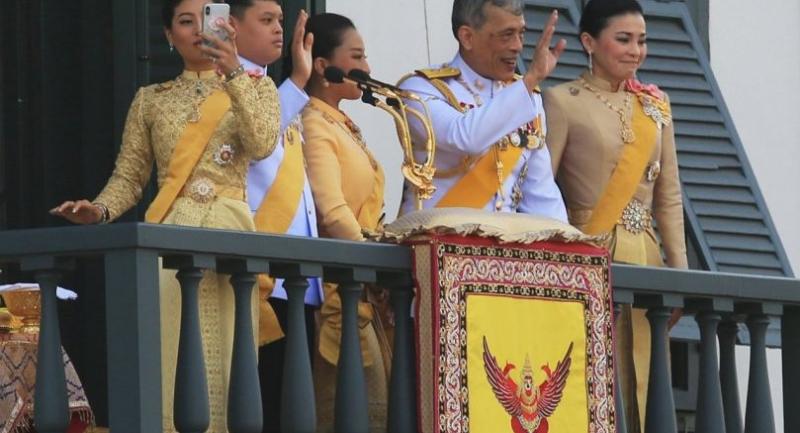 Prart Aroonrungsi, chief executive and founder of Prart Music Group and Overdrive magazine
"For me, His Majesty King Maha Vajiralongkorn has come at the right time for Thailand – so strong and confident. He is the hope of the Thai people.
Love Live the King!"

Bodin Charoenrat, frontman of pop band Mild
"As a Thai citizen, who has the deepest gratitude to our beloved King and the Royal Family, I would like to express my sincere allegiance to our King Maha Vajiralongkorn.
May he live a long life with good health and prosperity."

Palapol Ponkongseng, pop artist with GMM Grammy
"This is the most important ceremony in the history of Thailand and for Thai people, who have had a chance to take part in this history. I was so excited to see so many Thais get a chance to have an audience with royalty. This is an important opportunity for Thai people to glorify the monarchy."

Orathai “Tai” Dabkam, luk thung artist with Grammy Gold
"It is a once-in-a-lifetime opportunity to see this traditional coronation ceremony dating back more than two centuries. All parts of the ceremony were so great. I couldn’t hold back my tears when I saw the King in the midst of people wearing yellow shirts on Rajdamnoen Avenue."

Film director Yongyooth Thongkongtoom
"The ceremony was so magnificent and the images from the live broadcast throughout all three days reflected the grandeur and traditions of a ceremony that has been practised for a long, long time. It taught me a lot about the historical background, and what was behind the evolution. I am grateful that technology has helped record each and every detail of the magnificent ceremony forever."

Senior Colonel Wanchana Sawasdee, who played King Naresuan in the epic “Tamnan Somdej Phra Naresuan Maharaj” (“The Legend of King Naresuan”)
"I watched the coronation ceremony on television. My family and I were eagerly waiting to watch His Majesty King Maha Vajiralongkorn’s first Royal command. The ceremony was overwhelming, and I feel that we, Thai people, are fortunate to be in a country that can preserve and practise ancient ceremonies."

Dr Narong Prangcharoen, dean, College of Music, Mahidol University
"The monarchy has been in the heart of each and every Thai. Every King has been key to peace in our country. His Majesty King Maha Vajiralongkorn’s coronation is an auspicious event. The last time this ancient ceremony took place was 69 years ago. For many of us, this was a once-in-a-lifetime experience and a spectacular phenomenon.
This ceremony highlighted our ancient rituals, as well as our rich and strong culture. Such rare and grand ceremonies also show the world that Thailand has long-established traditions. This event will bring Thailand back into the limelight and helped strengthen the trust of allied nations in Thailand as an important partner in the region and a prominent force for the world economy. The coronation ceremony has made the country happy. We, the Thais, are pleased that we finally have our King, who is in our hearts now and forever."

Assoc Darin Pantoomkomol, dean for Education, Academic Affairs and Research and chair of Jazz Department College of Music, Mahidol University
"Monarchy institution has played vital roles in the development of Thailand throughout the history of the nation. Nowadays in the reign of His Majesty King Maha Vajiralongkorn, many of his contributions made to the country through royal duties have been very well recognised both in the national and international societies.
This is the first time in my life, as well as many others', to see these elaborate ceremonies which have been in existence for centuries, from the sacred purification ritual, royal ragalia presentation, to the spectacular Royal Land Procession. These precious moments will be remembered for my lifetime.
In this very special occasion of the formal coronation of His Majesty, I feel greatly honored to spend my days witnessing this once-in-a-lifetime moment with passion and gratefulness to the King and the Royal Family who have contributed greatly to Thai society, as well as served as Thailand's unifying elements for centuries.
May I take this opportunity to exprees my respect and loyalty to the King and the Royal Family and to wish them happiness, good health and long lives."