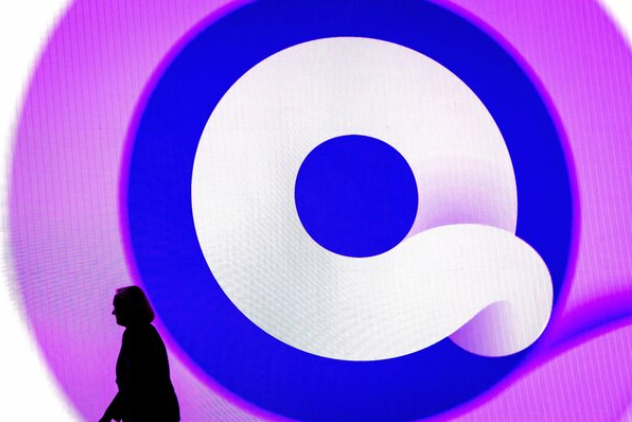 Meg Whitman, chief executive officer of Quibi, exits the stage at the conclusion a keynote at CES 2020 in Las Vegas on Jan. 8, 2020. MUST CREDIT: Bloomberg photo by David Paul Morris.

After a long stint embedded in his home office, Jeffrey Katzenberg felt almost ready to take a break. He was looking forward, he said on a Zoom call in late March, to watching more of "Tiger King," the wacko documentary series from Netflix about big-cat trainers behaving badly, which was currently captivating large numbers of homebound viewers.

A few years ago, Katzenberg said, he'd come across Joe Exotic, the incarcerated zookeeper at the center of the Florida-noir series, and had considered making a show about him. But it never came to pass, and now he was in the same boat as everybody else, stuck at home, watching the hit program on Netflix.

The special powers of exotic animals seemed to be lingering on his mind. The press could hound him all they wanted but he didn't scare easily, he explained. He leaned forward, took a pinch of his arm, and held it up to his computer's camera. "This is rhino skin," said Katzenberg.

In the days ahead, he will certainly need all the big rhino energy he can muster. On Monday, Katzenberg and his business partner Meg Whitman, the former chief executive officer of EBay, are overseeing the much-anticipated launch of Quibi, a short-form mobile video service that arrives into a crowded field of fierce competitors who are digging in for a long, bloody battle.

Quibi, which will eventually cost $5 a month with ads, or $8 without them, will roll out 175 shows this year. The kaleidoscopic slate of programming is a mix of comedic series, dramas, reality shows, and topical news programs - all of it serialized into brief episodes. The idea is to reach out and grab users' attention for a few minutes at a time whenever they're idly staring down at their phones. In one cooking competition, food is blasted out of a cannon onto participants' faces. In another show, a sex therapist talks about how to date during a pandemic.

While Quibi can sometimes sounds like a film school fever dream, it's one of the more ambitious projects to emerge in recent years from the crossroads of Hollywood and Silicon Valley. To date, the company has collected about $2 billion worth of investment, much of it coming from major media companies. It has written checks to some of the biggest celebrities in the world. Steven Spielberg and Bill Murray are contributors. "The first thing you have to understand is, if you are a storyteller and you work in Hollywood - movies, television, animation, I don't care, any part of it - you are an entrepreneur," said Katzenberg. "And that entrepreneurial spirit hasn't been tapped in a while."

Despite Katzenberg's impressive track record in the entertainment business, plenty of competitors, critics and industry analysts are betting on Quibi to lose. "Our reaction out of the gate was: 'I think this is gonna be pretty tough,'" said Stephen Beck, founder and managing partner of management consulting firm CG42. "Free short-form video on your mobile phone already exists, and you can get a lot of it by relatively big-name stars." See, for example, YouTube.

Katzenberg said he has found some of the more pointed criticism of the yet-to-launch service downright amusing. In February, the New York Times published a lengthy essay by writer Dan Brooks entitled "What's a Quibi? A Way to Amuse Yourself Until You're Dead," which argued that the service cynically aimed to exploit consumers' already unhealthy addictions to smartphones. Katzenberg said that after reading the piece, he reached out to its author and set the guy up with a phone loaded with Quibi content. That's Rhino Skin, buddy. (Brooks said in an email the shows he saw were "uneven.")

"I asked my kids: 'Are your friends watching stuff on their phones?' They said: 'Absolutely.' So we wrote the script."

On Feb. 2, Quibi ran a Super Bowl ad in which a bunch of bank robbers wait for their getaway driver, who is distracted mid-heist by a Quibi show on his phone. Tagline: "Episodes in 10 Minutes or Less." In the weeks that followed, Katzenberg and his colleagues were planning to advertise heavily during other major sports events, including March Madness. The campaign was supposed to culminate with a star-studded premiere party at 3Labs in Culver City, California. All of it was conceived to generate a ton of free press.

Getting Quibi's quirky-sounding name out as much as possible was important. Outside of the entertainment and media industries, few people knew what Quibi was. In a poll commissioned by the Hollywood Reporter and Morning Consult in March, 81% of adults said they'd heard little or nothing at all about Quibi.

But before Quibi could promote itself to America's legions of live-sports viewers, the pandemic hit and the entire sports industry ground to a halt. Quibi would have to turn elsewhere for introductions en masse.

In mid-March, with businesses and schools shutting down around the country, Katzenberg, Whitman and the board discussed the possibility of delaying Quibi's April 6 launch date. "We said, 'OK, we can launch, but should we launch?'" Whitman told Bloomberg Television. "We're not health-care professionals, we're not first responders. But we thought what we do is inform, entertain and inspire. So we thought we could bring a little joy and light and levity to people's challenges right now. So we decided to go."

Rather than postponing, they tweaked the rollout. They decided to give away the service for free for the first 90 days, a way of appealing to cash-strapped viewers suddenly grappling with a dire economic situation. Quibi also shifted the focus of its advertising blitz away from live TV events and onto social media.Katzenberg and his colleagues have since rolled out a campaign in which the company is paying its series' stars like Chrissy Teigen to hype Quibi on Twitter, Instagram and TikTok.

Meanwhile, many contributors in Hollywood are watching the launch with curiosity. Peter and Bobby Farrelly, the fraternal screenwriters known for comedies like "Dumb and Dumber" and "There's Something About Mary," have a Quibi show in the works, entitled "The Now," starring Dave Franco and Bill Murray, which will premier in May. In separate phone interviews, the Farrelly Brothers said it was a little weird to make a film that needed a cliffhanger every 10 minutes, but ultimately that it was "a fun experiment."

"I rarely watch things on my phone, certainly not television," said Peter Farrelly. "So I asked my kids: 'Are your friends watching stuff on their phones?' They said: 'Absolutely.' So we wrote the script."

While the new service may feel experimental, Katzenberg is quick to point out that Quibi has plenty of historical precedents. He cites Charles Dickens as a producer of Quibi-like narratives, as well as Dan Brown, the author of "The DaVinci Code." Both writers, Katzenberg said, were masters of feeding audiences long stories in installments. For readers lacking time or self-discipline, that meant they could consume a sprawling, complex tale in brief increments over weeks or months without losing the plot.

Quibi's kickoff comes not long after the debut of Disney+, the robust streaming service that arrived in the U.S. in November and quickly attracted more than 28 million subscribers. Disney can be a tough act to follow. Katzenberg should know. During the '80s and early '90s, he oversaw a major revival of Disney's animation division. While he may have missed out on "Tiger King," back in 1994, he found an epic feline hit in "The Lion King," which went on to gross hundreds of millions of dollars at the box office for Disney and has since spawned an impressive litter of spinoff movies and shows. These days, "The Lion King" franchise is still hard at work, attracting streaming subscribers to Disney+. "They got 100 years, the greatest brands ever known, the most amazing library ever, and 'The Mandalorian,'" said Katzenberg, referring to a popular Star Wars show.

Quibi, by contrast, has got some interesting mobile viewing technology, a large batch of unproven programming and some great expectations. Katzenberg said that of the 50 shows that Quibi will offer people in the first two weeks, he expects eight to 10 to go viral. "Meaning, in the same way we're laughing about 'Tiger King,'" he said. "You're hearing about it through a connection. We're not allowed to be around one another, but we are all still connected."