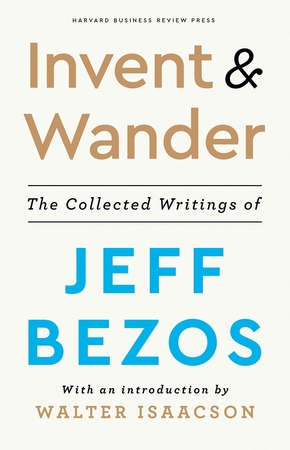 Invent and Wander: The Collected Writings of Jeff Bezos

By Jeff Bezos, with an introduction by Walter Isaacson

It is quite strange, whether or not you've stopped to consider it, that Jeff Bezos has never published a book. Shelf after shelf could be filled with memoirs or "thought leadership" tomes from company founders who've been less successful than he has (which is pretty much all founders). Moreover, Bezos and Amazon both have origin stories with the flavor of legend, which would guarantee a large and eager audience.

"Invent and Wander" represents a partial attempt to fill that publishing vacuum by offering Bezos's "collected writings." Specifically, the book consists of all the annual letters Bezos (presumably with some ghostwriting assistance) sent to Amazon shareholders from 1997 to 2019, plus excerpts from interviews and speeches he has given in recent years. There is also a lengthy introduction from Walter Isaacson, who argues that Bezos's personal character resembles that of some of Isaacson's biographical subjects, such as Benjamin Franklin and Steve Jobs.

The range of topics in this volume is broad, including Bezos's humble personal beginnings, Amazon's occasional stumbles along an otherwise rocket-boosted growth path, the practical applications of artificial intelligence and machine learning, and Bezos's rationale for expanded space exploration (he doesn't favor colonizing Mars). There is even a brief chapter in which Bezos explains why he bought The Washington Post.

In his introduction, Isaacson weaves these disparate strands into an effective story line. The keys to Bezos's success, he argues, are passionate curiosity, a multidisciplinary scope that incorporates science and humanities, and the ability to retain "a childlike sense of wonder." Bezos had a hunch in the mid-1990s about the stratospheric growth of the Internet, but only the skills to hustle and innovate allowed him to turn that insight into a successful business. Bezos's personal philosophy, Isaacson concludes, is an intriguing mixture of "social liberalism" and a fervent commitment to free-market, entrepreneurial capitalism.

The rest of the book is a bit harder to digest. The shareholder letters do provide a useful map of Amazon's journey. Today, when Amazon stock trades at well over $3,000 a share and the company is worth a staggering $1.6 trillion, it is easy to forget that at the beginning of this century, as dot-com companies imploded, Amazon stock sank as low as $6 a share. Bezos began the 2000 letter to shareholders with a one-word sentence: "Ouch." Throughout the company's history, he retains a sense of urgency - every day on the Internet, he insists, is Day One - and a painstaking focus on customer satisfaction. Amazon Web Services, a cloud-computing company that launched in 2006, grew out of a corporate culture that "is unusually supportive of small businesses with big potential," Bezos wrote at the time. Today, AWS provides an outsize portion of Amazon's profits, which seems to confirm Bezos's view.

Still, shareholder letters are seldom considered must-reads. Warren Buffett's were also collected into a book a few years ago, but they are truly different beasts than Bezos's and most others, with their combination of folk wisdom, Bible quotes and fairly detailed statistics. And even Buffett's letters become less compelling when stacked one year on top of the next.

The interview and speech excerpt section is more engaging, mostly because it contains flesh-and-blood details about the man and not just Amazon. Bezos's mother was pregnant with him while still in high school in 1960s New Mexico, and she would have been expelled for it but for her father's intervention. The young Bezos was a science fiction nerd who built homemade booby traps to delight his obviously patient family. Bezos and his wife initially packed up Amazon orders while kneeling on a concrete floor. His idea for improvement was kneepads; when an employee suggested packing tables, Bezos declared him a genius. "The next day I went and bought packing tables and doubled our productivity," he writes.

This section of the book also provides a glimpse into the more expansive parts of Bezos's thinking. He has actively committed Amazon to minimize its carbon footprint; he pledges that the company's use of renewable energy will be 100% by 2030. He convinced himself that buying The Post was a reasonable business proposition because, even though well-managed newspapers have gone through a long period of decline, the Internet makes it possible to bring their content to a global audience. And he is unabashed in his defense of Big Business. While Bezos loves companies like Amazon that started off in garages, he argues that "nobody in their garage is going to build an all-carbon-fiber, fuel-efficient Boeing 787."

What's frustrating about even the best parts of this book is the feeling of being confined to the surface; there's little narrative, tension or challenging introspection. Amazon and Bezos for many years have been surrounded by controversy, from e-commerce tax breaks to anti-union stances to battles with the Trump administration. Regardless of where readers might stand on such issues, we know that Bezos is thoughtful enough to have informed opinions - let's hear them!

In short, for all this volume's insights, there remains ample room for a great Bezos book. If he doesn't write it himself, Isaacson seems like a stellar second choice.

Ledbetter is a former editor in chief of Inc. and a former writer and editor for the Industry Standard. He is author, most recently, of "One Nation Under Gold: How One Precious Metal Has Dominated the American Imagination for Four Centuries."