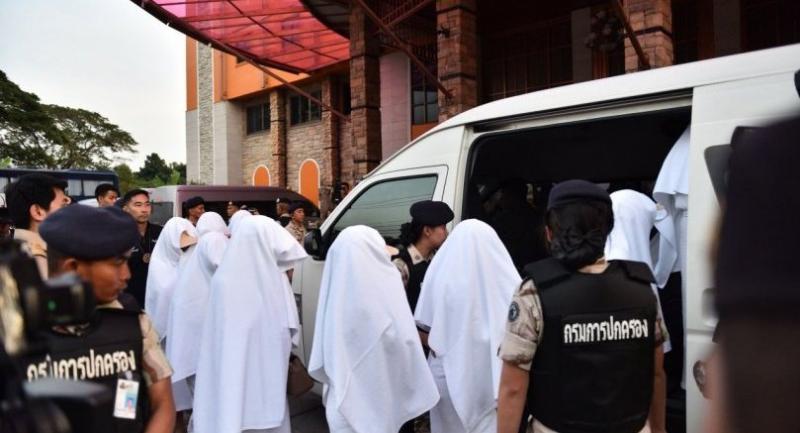 SIX DEFENDANTS involved in prostitution at Victoria’s: the Secret Forever massage parlour were yesterday convicted and given a combined sentence of 80 years.

Located in the heart of Bangkok, the parlour went out of business after a team from the Department of Special Investigation (DSI) and the military rounded up more than 100 suspected sex workers on the premises in January. Some of the workers were found to be younger than 15 years old.

The charges apply to the offences committed between October 2016 and January 2018. The venue’s manager Satthatham Jangchai, and three others – Boonsap Amornrattanasiri, Chainarong Unsuk and Eknapat Jaruwatpathomkul – were convicted of procuring prostitutes. They each received jail terms of 15 years and 12 |months (calculated on 30-days per |month basis).

Sasithorn Weerathepsuporn, who applied for the parlour’s operating licence, was convicted and sentenced to seven years and 14 months for the same offence.

The court also convicted Sattha-tham, Boonsap, Sasithorn and driver, Decha Singsakhon, in a related case of arranging girls aged under 15 for sex services. Decha was responsible for driving the underage prostitutes from Bangkok to Malaysia where they were required to have sex with customers for money.

Satthatham and Boonsap each received a jail term of three years and four months, while Sasithorn was jailed for seven months. Decha was sentenced to six years imprisonment. While the four defendants in the second case were charged with human trafficking they were not convicted.

Public prosecutors at the Department of Trafficking in Persons said an appeal would be likely as they believed many of the defendants involved in the parlour’s sex trade were also involved in human |trafficking.

The case involving two others, Manas Uamtab and Somchai Saeng-udom, is still ongoing. They have confessed to their crimes and the court is scheduled to deliver its verdict on September 19.