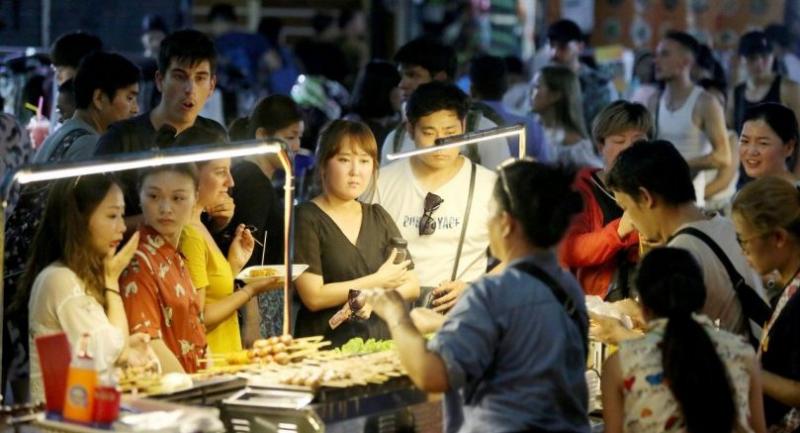 Khaosan is boring by day, but it's busy by night. Nation/Tanachai Pramarnpanich

Singapore has asked Unesco to formally recognise its street-hawker culture, which would help the island-state promote it as yet another tour ist attraction. In Thailand, it’s a completely different story.

Prodded by the orderliness-obsessed military-led government, Bangkok authorities are determined to transform the city’s reputation for unsurpassable street food – or extinguish that reputation, as critics charge. The mobile noodle vendors and everyone else informally touting goods on the sidewalks have to clear out. Khaosan is boring by day, but it's busy by night. Nation/Tanachai Pramarnpanich

The push hasn’t gone down well with many Thais, including academics and urban planners, who regard the sheer chaos of crowded street-hawking scenes and especially the clots of food vendors’ smoky, aromatic carts as being among Bangkok’s premier attractions.

The city is being sanitised, the critics complain, while pointing out that foodies from around the world rave about the tasty yet cheap dishes they can slurp up on any Bangkok sidewalk.

“Bangkok is famous as the city of markets, but now many markets are dead,” said British expatriate Philip Cornwel-Smith, author of “Very Thai”, a well-received book exploring what is unique about the Kingdom.

“Just to treat the markets with eviction after eviction actually does big damage to parts of Bangkok’s identity and its reputation internationally.”

“Khaosan has lost that charm of being chaotically filled with street vendors. It’s empty during the daytime,” he said, adding that he’d be back after dark, the only hours the hawkers are allowed to set up.

A network of street vendors founded to push back against the clean-up effort marched on Government House early this week with a handful of demands. Many more attended a pair of public discussions about the ruckus coincidentally organised for the same week. One, called “Street Vendor and City: Leaving No One Behind”, took place at Chulalongkorn University.

“The management of street vending is a complex issue,” Assistant Professor Narumol Nirathron of Thammasat University pointed out. “The BMA alone can’t handle it – it’s a matter for the national agenda.

“To achieve United Nations Sustainable Development Goals, the government needs to handle this issue properly, by integrating the work of the Economic Affairs, Security, Commerce, Tourism and Sports and Culture ministries.”

Narumol and fellow academics from Thammasat, Chulalongkorn, the Thailand Development Research Institute Foundation and Urban and Design Development Centre plan to present an open letter to Prime Minister Prayut Chan-o-cha asking him to reconsider street-vending regulations designed to “return the pavements to the public”.

The government’s ultimate intention is to ban street hawkers in 683 areas of the capital where they’ve long been “temporarily” permitted to do business. As of last month, they’d been shut down in 478 areas, affecting 11,573 vendors in all. The BMA is gradually moving in on the remaining 210 areas and most recently has had Khaosan Road in its gun sights.

In their letter to Prayut, the academics note that one reason given for the cleanup was “to liberate Bangkok from a ‘disorderly’, ‘antiquated’, ‘undeveloped’ look.

“In reality, however, a state of disorder – or order, for that matter – also depends on the management by government agencies, while an antiquated or undeveloped look has nothing to do with street vending.

“In the US and Europe, known for their advanced development, the governments are allowing more street vendors to operate because the authorities are not able to create enough jobs [for everyone]. Thus, in pursuing the goal to make Thailand modernised and more developed, the government must not leave a number of people behind, as seems to be the case at present.

“Singapore is more advanced,” Narumol said. “It has a long-term policy to make the country clean and green and recently bid for Unesco to recognise its hawker culture as an intangible cultural asset.” Assistant Professor Niramon Kulsri-somba, director of the Urban and Design Development Centre, said Bangkok street vending could be sustainably managed and become “a win-win situation”. Niramon, an urban architect, is with her team redeveloping the Phaholyothin Soi 9 (Soi Aree) area with zones for street vendors. “Rather than top-down management, community engagement is the key. We need to get all the stakeholders talking so they can compare their needs and come up with a solution that will satisfy everyone,” she said, while admitting it will take time.

At the second discussion, “Negotiating Bangkok Streets”, held at the Bangkok Art and Culture Centre, Trude Renwick, a PhD candidate in architectural history and theory at the University of California Berkeley, said street-vendor culture was important for a “creative city like Bangkok”.

“Street culture is something that can’t be taken away. It’s an essential part of the urban and rural ecosystems in Thailand,” said Renwick, who in 2011 began making “Observations from the Siam Square night market” on her way to earning her master’s degree.

“Good urban change benefits all citizens and requires complex thought. Bans haven’t produced any positive changes in the past, so I have a hard time believing that it will be any different now.”

Rangsit University architecture lecturer Parisa Musigakama has been focusing on the Khaosan situation for her PhD.

“Top-down governance by the state is infective and exploitative,” she said.

“The Khaosan Road Street Vendor Association is very strong, with a powerful leader in Yada Pornpetrumpa, and their negotiations have reached the national level.”

In response to the petition given him by the marching street vendors, Prayut ordered the BMA and Metropolitan Police to establish committees to address issues with the vendors.

Unesco Bangkok's Culture Unit Chief Duong Bich Hanh believes it would be best to consider the matter in terms of sustainable tourism and preserving old communities.

“Properly planned community-based tourism might be a measure to address this dilemma,” she said. “It’s important to work closely with communities when planning for tourism, to hear their voices and see whether and to what extent they want to open up their neighbourhoods to tourists.

“Fair-benefit sharing is another important aspect to ensure that local communities do benefit from tourism development, rather than being left out or being at the lower end of the supply chain,” she said.

“In addition, awareness about the importance of safeguarding the heritage, both intangible and tangible, needs to be raised among local communities and the authorities alike to ensure that age-old heritage doesn’t have to give way to modern tourism facilities.”