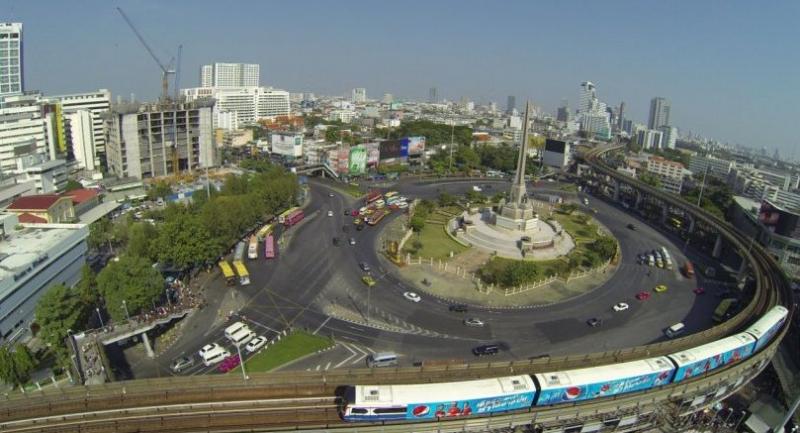 Renovation plans for Bangkok’s historic landmarks have run into a monumental disruption – who’s actually in charge of these places?

Despite its best efforts, the Bangkok Metropolitan Administration (BMA) has run into controversy as it sizes up the landmark Victory Monument for renovations.

Responding to a request from the War Veterans Organisation of Thailand to establish a museum and pedestrian tunnels beneath the monument, the BMA first had to determine which government agency must grant permission for the changes.

As it turned out, no one knew who was in charge. After two months of asking around, there’s still no resolution.

There is no shortage of candidates. Besides the BMA itself, the government’s Fine Art Department, the War Veterans Organisation under the Interior Ministry, the Finance Ministry’s Treasury Department and the Transport Ministry’s Department of Highways all have a say in what happens at the site. The Victory Monument is one of 16 memorials in the capital that are scheduled for landscape redevelopment, and renovations are foreseen at nearly 40 historic sites. These include the Democracy Monument, the 22 July Circle in Yaowarat district and several statues of monarchs – King Rama I near Memorial Bridge, Rama V in the Royal Plaza, Rama VI in Lumpini Park and Taksin the Great at Thonburi’s Wong Wian Yai.

In each case, “custody” must first be determined. Who’s responsible for the site? Only then can budgeting be mutually worked out.

Asst Professor Chatri Prakitnontakan of Silpakorn University’s Architecture Faculty suggests, though, that the matter of “ownership” is less important than ensuring the work is acceptable and reflects sustainable development.

“The Victory Monument is public property, so the BMA should be holding public hearings,” he told The Nation Weekend.

“The renovation of so many monuments and historical sites is a mega-project that the BMA can’t handle alone. It needs a master plan and partnerships with many government agencies.” Prime Minister Prayut Cha-o-cha attached a sense of urgency to Bangkok’s re-landscaping when he pointed out there was already a budget. “But now we need caretakers,” he said. Deputy PM Prawit Wongsuwan promptly recommended a meeting of all the agencies involved with the Victory Monument to decide who’ll take charge.

The obelisk-like monument was designed by ML Pum Malakul and erected by the Fine Art Department in 1941. It commemorates Thailand’s triumph in the 1940-41 Franco-Thai War over territories in French Indochina.

The monument stands in the whirl of a traffic circle forming one of Bangkok’s busiest junctions, in Ratchathewi district, and that’s a factor in the current confusion.

“The monument is located in ‘no-man’s land’ and there’s no title deed,” says Department of City Planning chief Sakchai Boonma. “It’s on a road, which is public space, so City Hall is its caretaker. The BMA has budgeted more than Bt40 million for the renovations and, if we get design approval from the Fine Art Department, we hope to finish the work by the end of next year.”

The inter-agency meeting that Prawit wants will take place next week at City Hall, Sakchai said on Thursday.

He pointed out, too, that the city is slated for considerable redevelopment aimed at boosting tourism. It is indeed the Fine Art Department that has to give the green light to work done on all historic monuments and sites in the country. Maleebhon Kumkasem, director of its legal division, says neither the Victory nor the Democracy monument is yet registered as an historical site.

“The government ordered them built but assigned care-taking responsibility to no agency. However, any renovation plans have to be approved by Fine Art Department to be legal.”

Architect Chatri notes that the BMA has no proper conservation team and could end up damaging monuments. Its controversial demolition of a century-old community at historic Mahakan Fort to make way for a park was all the more distasteful, because it also renovated an historic structure inside the fort without the Fine Art Department’s permission.

And many monuments are on Rattanakosin Island, Chatri pointed out. Any work conducted there would have to proceed in consultation with a separate committee overseeing the old city’s conservation and development, as well with as the Royal Household Bureau.

Chatri also wondered whether there was a political agenda behind the revamp, since most of the sites in question are associated with political events and the monarchy. “The renovations imply that the government wants to demonstrate nationalism and show admiration for the monarchy.” Building monuments to commemorate historical events and heroes is a Western notion, he said, whereas the Thai tradition is to regard portrayals of living people as an invitation to bad luck. It could cut that person’s life short. Thai Buddhists typically prefer to commission Buddha statues bearing their names.

The Western concept appeared when Rama IV was on the throne. King Mongkut was a modernist and embraced the then-new art of photography. His portrait was taken many times.

“He was the first king to have sculptors make statues in his likeness, which he displayed in the palaces,” Chatri says.

His equally modern-minded son, King Chulalongkorn, is immortalised in bronze in the equestrian statue in Royal Plaza. “That was the Kingdom’s first public monument, erected in 1908 to commemorate his 40th anniversary on the throne,” Chatri says.

Monuments became much more popular in the reign of Rama VI, who brought Italian sculptor Corrado Feroci to Siam to introduce more European-style arts and architecture.

Feroci, who changed his name to Silpa Bhirasri, went on to found Silpakorn University and is today revered as the father of Thai modern art, sculpted the figures that ring the base of the Victory Monument.