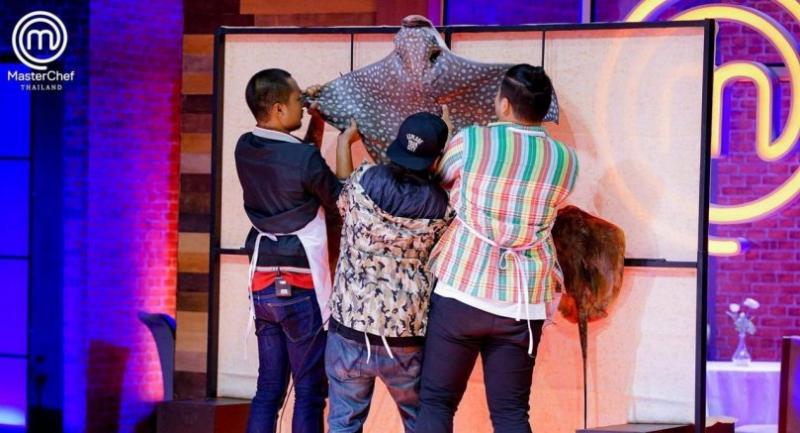 THE COOKING of what appeared to be spotted eagle rays during a TV show on World Wildlife Day on Sunday has sparked social media outrage over the appropriateness of normalising the consumption of endangered species on mainstream media.

Despite experts confirming that fishing and consuming spotted eagle ray is completely legal in Thailand – Thai law still does not include the species in the country’s protected animals list – many people argued that the use of endangered species as cooking material on a popular TV show jeopardised efforts to save them.

Earlier on World Wildlife Day, which highlighted the conservation of marine biodiversity, the reality cooking-competition show “MasterChef Thailand” had selected stingrays as the main ingredient for the programme. After the show, however, it was noticed that the rays used in the TV show were likely to have been the rare spotted eagle variety.

The discovery sparked a hot debate on social media over the legality and appropriateness of consuming this endangered marine species – one side claimed the consumption of endangered rays was unacceptable and the other argued that such stingrays were not especially rare and their consumption was widespread in the Kingdom.

The producers of “MasterChef Thailand”, meanwhile, posted a statement on its Facebook page (facebook.com/masterchefthailand) yesterday to clarify the ray species used in Sunday’s programme.

The Heliconia H producers went on to say that this particular fish ingredient had been used in various TV shows before – MasterChef Thailand was far from being the first to use it, said their statement.

Confirming the show’s intention to present dishes with ingredients readily available to the public at markets, Heliconia H said they had not intentionally set out to introduce protected animals on the show.

All they had done was follow guidelines set out in the Wild Animal Reservation and Protection Act as their reference whenever they planned to include the use of “special ingredients”, they added.

Thon Thamrongnawasawat, a leading marine biologist at Kasetsart University’s Faculty of Fisheries, said the exact ray species that had been used on the TV show had not yet been confirmed, but it was very likely one of two spotted eagle species – Aetobatus ocellatus, which can be found in the tropical Indo-West Pacific region, or Aetobatus narinari, which live in the Atlantic Ocean.

According to the International Union for Conservation of Nature (IUCN), both spotted eagle ray species have conservation status, as they are endangered by unsustainable fishing and habitat loss and their populations are in decline. Aetobatus ocellatus is listed as vulnerable on the IUCN red list, while Aetobatus narinari is listed as near-threatened, Thon said.

The marine biologist confirmed that despite the international conservation status of both species, their consumption on the TV show would have been legal, because these ray species were still not protected under Thailand’s animal conservation law.

Nevertheless, he said the use of endangered species with international conservation on mainstream media was inappropriate, because it might encourage the consumption of rare animal species and jeopardise biodiversity-conservation efforts.