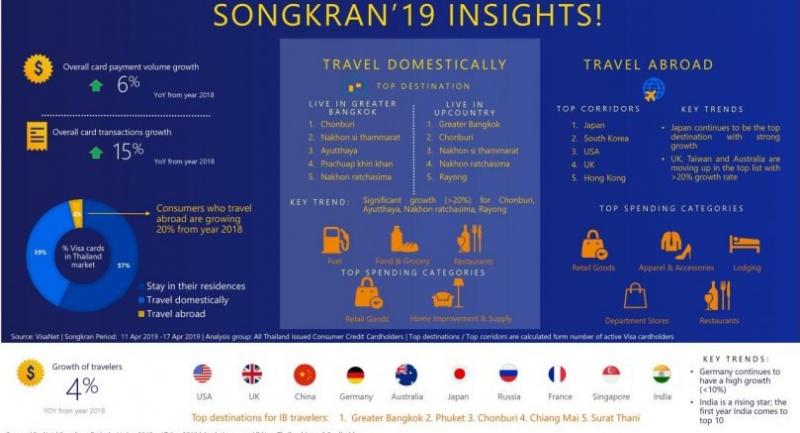 Visa says during Songkran its cardholders made 15 per cent more transactions, spending 6 per cent more during the 2019 holiday compared to the year prior.

The data indicates more Thais are embracing digital payments for making purchases both in stores and online as the country is pushing towards becoming a less-cash society.

Suripong Tantiyanon of Visa Thailand said: “This spending data validates the steady progress of the nation towards becoming a less-cash society. Thai consumers are becoming increasingly confident in using digital payments, supported by the governments push for the adoption of e-payments.”

Travelling inland or abroad has become a notable trend during Songkran. The data revealed that 39 per cent of Thai Visa cardholders spent within Thailand, 57 per cent used their Visa cards in their residential provinces and 4 per cent made purchases abroad with Visa cards during the holiday season.

“We are excited to see the greater adoption and usage of digital payments among Thai consumers. It is our hope that by sharing these insights, the payment industry at large can leverage this data for developing products and services that meet the ever-changing demand of Thai consumers, ultimately accelerating the country toward a less-cash society,” Suripong said.