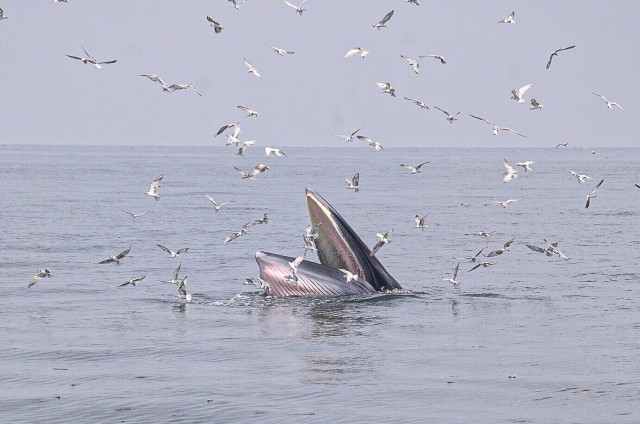 After the incident of more than 20 tourists driving jet skis on a whale-watching expedition in Chon Buri on October 15, which adversely affected marine animals and environment, the director of the Department of Marine and Coastal Resources said measures need to be put in place to prevent such behaviour.

Yutthaphon Ankinandana, an adviser to Natural Resources and the Environment Minister Varawut Silpa-archa, said he and his team visited the affected area on October 20. He said the minister has told him and his team to find an immediate solution and monitor the Bryde's whales population closely.

The department will invite all Bryde's whales sightseeing tour providers and other parties who benefit from the business for a discussion on how the business can be regulated. The conclusion of the meeting will be reviewed and reported to the ministry.

Sophon Thongdee, the department’s deputy director-general, has given the coastguard and local environment agents to monitor and patrol the area. They will also promote and raise awareness among tour providers, fishermen and tourists on how to watch the marine creatures without disturbing them.

Only three boats can stay near the whales, so the creatures do not panic. All boat engines must be turned off if it is approached by a whale. If a mother whale is seen with her baby, boats must stay at least 300 metres away. If whales are being watched from the air, then aircraft can fly no lower than 300 metres, while helicopters can go no lower than 500 metres. Unmanned craft like drones can go no lower than 50 metres. No jet skis or speed boats are allowed in the area, because they may injure the whales or stress them with the sound of the engine.

“All citizens and operators of Bryde's whales watching businesses must comply with our recommendations. Everybody should keep an eye out for actions that might affect marine and coastal resources, especially in relation to endangered marine animals. If any action is found to seriously affect marine and coastal resources, notify the department immediately. If the action is considered a legal offence, strict legal measures will be taken against the wrongdoer,” Sophon said.

People can call (02) 141 1300 if they witness any behaviour that can be damaging to marine or coastal resources.

Related story: Bryde’s whales put on a show in Gulf