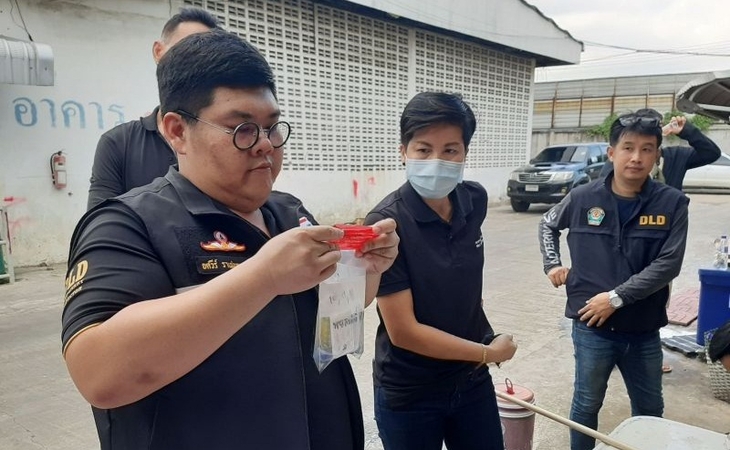 Members of the Department of Livestock Development’s “Phaya Thai” special operation team and other officials inspected a pig slaughterhouse in Samut Prakan province to test for the presence of beta-agonist, a chemical that artificially promotes growth among animals.

Urine tests conducted on the pigs found 14 contaminated with the chemical, Sorawit Thanito, the department’s director-general, said on Wednesday (October 30).

“The samples were sent to the laboratory for official confirmation, while the contaminated pigs are still being kept in the abattoir,” he said. “If it is confirmed that this growth accelerating chemical has been used, we will prosecute the perpetrators to the fullest extent of the law.”

The department is also planning to inspect the farm these pigs came from. “This inspection is within the realm of the law and for consumers’ safety, as growth accelerators can harm those who consume the meat and other by-products.”

The department has been investigating cases of these chemicals being used illegally in farms or slaughterhouses nationwide using strict screening procedures.

“Those who produce this growth accelerating chemical or mix it with animal feed will face up to three years in prison and a fine of up to Bt60,000 or both,” Sorawit added.

Operators of slaughterhouses who violate the inspectors’ orders will face up to a year in prison and a fine of up to Bt100,000.

There are several different chemicals that can be used to accelerate growth and all have different levels of toxicity. Previously Clenbuterol was widely used, but now farmers are using Salbutamol and Ractopamine, while a new chemical called Zilpaterol is also being circulated.

The accelerator is mixed in animal feed to stimulate the use of energy from fat, reducing fat and adding protein to the animals’ muscles. This chemistry also results in very red and lean meat.

However, consumption of meat with residues of the chemical can result in tremors, irregular heartbeat, restlessness, dizziness and headaches. People with heart disease, epilepsy, high-blood pressure and diabetes are most at risk. This meat can also adversely affect pregnant women.