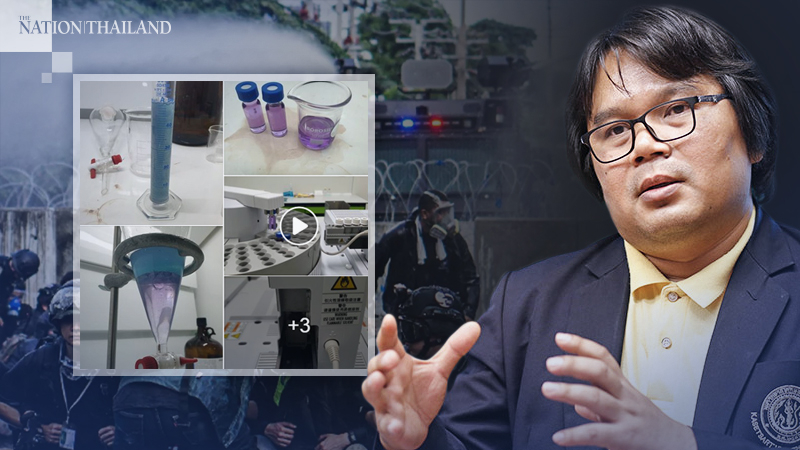 A sample of the solution police fired at pro-democracy protesters on Tuesday has tested positive for four different chemicals which burn the eyes and skin.

Riot police fired the solution from water cannons at Kiak Kai Intersection, during a confrontation with protesters who were seeking to rally outside Parliament on the first day of charter-change deliberations.

Protesters and journalists hit by the solution suffered stinging eyes and skin, as well as breathing problems. Many needed hospital treatment.

The effects prompted questions over what chemicals police had used in the solution.

On Friday, Weerachai Phutdhawong, a Kasetsart University chemistry professor, announced results of his analysis of a sample of the solution used on Tuesday.

The results showed five chemicals, as well as a dye that turned the solution purple.

The first in the list was a solvent for the chemical mixture, said Weerachai.

The other four all belong to the tear gas group of chemicals, he said.

The second chemical, 2-Chlorobenzaldehyde, burns the skin and damages the eye, he explained.

“When people come into contact with it, it irritates their cornea and conjunctiva, making them cry. It can also cause other effects, such as a runny nose, coughing, or breathing difficulties,” he added.

The fourth, 2-chlorobenzalmalononitrile, is commonly known as CS gas – the defining component of tear gas used in riot control operations. The fifth chemical has the same irritant properties as the others.

The professor explained that all the four substances came under the tear-gas chemical group. However, it was enough to use only one of them for crowd-control purposes, he added.