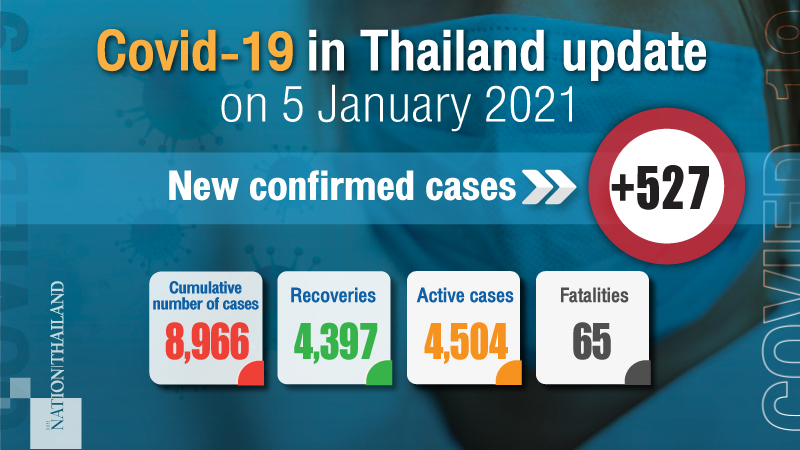 Twenty-six cases in Nakhon Pathom, one in Nan, six in Surat Thani and 18 in Nonthaburi are under investigation to find the source of the infection.

CCSA spokesperson Dr Taweesin Visanuyothin said 56 provinces had now been designated red zones with Singburi and Nan being the latest to be added to the list.

Meanwhile, 45 patients have recovered and been discharged.

The total number of confirmed cases in Thailand has risen to 8,966 – 6,900 of which were contracted domestically, including 2,476 migrant workers, and 2,066 returnees. So far, 4,397 have recovered and been discharged, while 65 have died.

Dr Taweesin said the outbreak from Samut Sakhon had spread to 45 provinces with most cases in the outbreak area (2,296), followed by Bangkok (86), Nakhon Pathom (38), Samut Prakarn (33), and Nonthaburi (17). Of the total patients, 71 per cent are Myanmar nationals, Thais are 24 per cent and other nationalities 5 per cent.

As for the Rayong cluster, 426 cases have been found since December 23. The average age of patients is 49 (36-57). Gender ratio in Rayong is 1.23 females to 1 male. The cluster spread to 7-8 districts of which three districts had more than 50 patients; 197 patients had got the virus from visiting gambling dens, followed by cockfighting ring (11), fitness centre (9).

He said the 50th case in Chiang Mai, a female vendor, 25, had close contact with the 62nd person to have died. He asked people who had visit entertainment venues in Bangkok and Chiang Mai to monitor their symptoms.