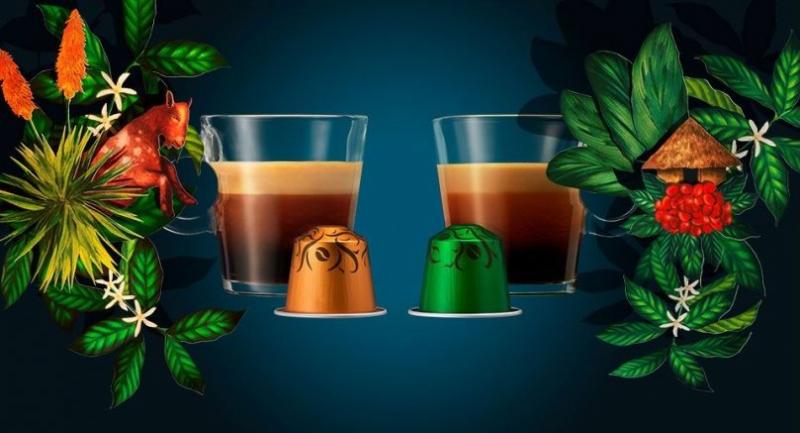 The new capsules take inspiration from the myths of coffee’s origins and shine the spotlight on coffees from Ethiopia, the birthplace of Arabica coffee and Uganda, one of the alleged birth places of Robusta coffee.

Arabica Ethiopia Harrar, produced from 100-per-cent Arabica from Harrar, the region where coffee was first commercialised on a large scale and exported globally, comes with notes of ripe fruits, fresh flowers and boasts a velvety body. Made from 100-per-cent Robusta, Robusta Uganda has a sweet and undeniably intense nature that’s rich in cacao notes.

Nespresso also partnered with London-based illustrator Mariana Rodrigues to design the coffee capsule sleeves inspired by the myth of Arabica and Robusta.

For Arabica, transport yourself to the ancient highlands of Ethiopia, where the story of Kaldi, a young goat herder begins. He sat in the shade one afternoon and watched over his goats. In the heat of the day, Kaldi drifted off to sleep and left his goats to wander off into the wilderness.

The goats discovered and started to eat some red cherries from bushes. When Kaldi awoke to find his goats gone, he hastily went in search of them. He found them leaping and dancing around the mysterious bushes. He picked a cherry and tried it for himself. He too felt elevated and began to dance alongside his goats.

A passing monk was extremely suspicious of the situation and decided to burn these mysterious cherries. Soon after he threw them in the flames, delicious aromas started to rise. Enchanted, the monk brushed the beans out of the fire, crushed them up and combined them with water to make the captivating drink we now know as Arabica coffee.

To discover the alleged birthplace of Robusta, we are in the bygone land of Buganda, now known as Uganda. Here, the precious Robusta coffee beans were part of a sacred ritual that united families. A single coffee cherry would be split and two people would each eat one of the two beans from inside. From that moment onwards, the spirit of the bean would connect both families and descendants for eternity in a pact of friendship and loyalty.

“I was inspired by the new coffees from Nespresso, especially their mythical origins. In creating the sleeves, I wanted to clearly depict the vibrancy of both these cultures and make the connection to their beautiful coffee stories and ingrained heritage,” said designer Rodrigues.

Arabica Ethiopia Harrar and Robusta Uganda are available for a limited period until March 27 at Nespresso boutique on the first floor of Siam Paragon.