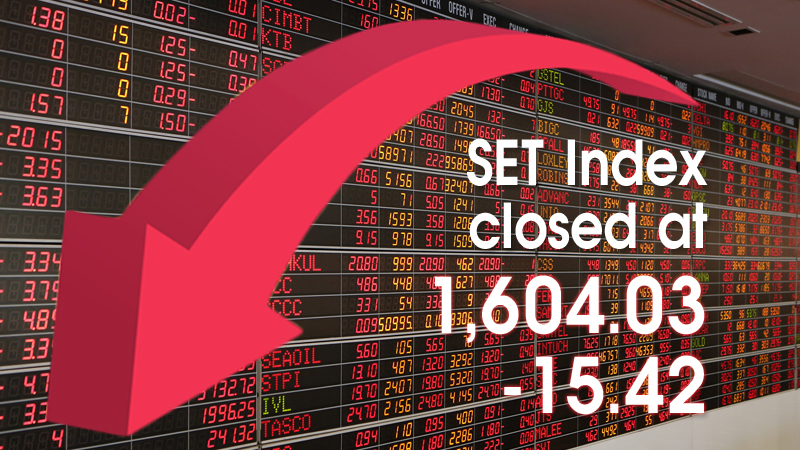 Funds exited Thailand’s stock and bond markets on Thursday (August 15), as the Stock Exchange of Thailand Index dropped 0.95 per cent over the previous day and the market closed at 1,604.43, down 15.42 points.

Trade volume was high, reaching Bt100 billion on a single day. Foreign investors made net share sales worth Bt11.9 billion on Thursday, aggregating sales of Bt35.4 billion between August 1 and 15. However, their net buy was Bt25.3 billion from January 1 to August 15.

However, the benchmark 10-year bonds dropped by six basis points to 1.42 per cent, suggesting that local financial institutions were buying, said Tada Phuttitada, president of the Thai Bond Market Association.

“Thailand also experienced an inverted yield curve, as a 10-year bond rate is lower than the short-term policy rate of the Bank of Thailand, which is currently set at 1.5 per cent,” said Tada.

The inverted yield curve in the United States has sparked investor concerns about a looming recession, and the three main stock markets in the US dropped 3 per cent on Wednesday.

In Thailand, the government has limited choice to handle an economic slowdown, he said. It is because Thai households suffer from high debt. Private investors may not want to invest more due to the unfavourable global economy. The government has also previously spent a lot of tax money, he said.

Sompop Manarungsan, president of the Panyapiwat Institute of Management, also voiced concerns about the threat of recession. The bond yield inversion is a credible signal of a looming recession. Currently there are massive amounts of bonds with negative yields worldwide, estimated at US$15 trillion or 25 per cent of total value of bonds estimated at $60 trillion globally, he said.

“This suggests there is huge liquidity in the market and financial institutions and investors are willing to subscribe to bonds although they may get less money back than they put in,” he said.

Sompop said the Bank of Thailand should not cut its policy rate again despite the clamour of exporters after the previous 0.25 percentage point cut. He said a rate cut would not help as the export sector was adversely impacted by the slowing global economy, not just a strong baht, he said.

Thailand’s exports are expected to contract this year.

He suggested that the government speed up public investment such as the double-rail project, the high-speed rail and other projects in the Eastern Economic Corridor. Public investment would counter the negative impact of the global recession should it happen, he added.