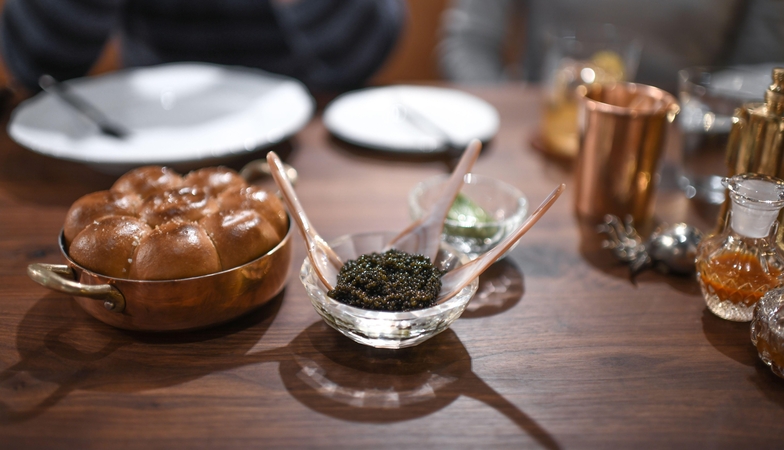 Angler's Parker House rolls are finished at a hearth. MUST CREDIT: Bonjwing Lee/Angler's.

In the U.S., bread sales aren't rising the way they used to. The market in bread and bakery products is projected to grow at a dismal 1.5% from 2020 to 2023. Yet a modest dinner roll is elbowing its way into the kitchens of top restaurants across the country.

The ascension of Parker House rolls isn't just surprising because so many diners continue to forgo bread as part of low-carb, high-protein diets-and when they do indulge, it's with rustic, seeded, more "artisanal" styles perceived to be more nutritious. Parker House rolls are as white as you can get in the baking world (with the possible exception of Japanese milk bread), its pearly, puffy interior encased in a golden-brown top that's invariably drenched in butter. At a time when dark, dense, fermented loaves are the cool kids in the bread basket, Parker House rolls could be their grandmother.

Notable chefs such as Joshua Skenes don't care. He's been making the rolls for around eight years, starting at his three-Michelin-starred Saison in San Francisco. Now at Angler, his cult seafood spots in Los Angeles and San Francisco, a lard-glazed version-cooked first in the oven in a copper pan, then finished beside an open hearth-arrives tableside, piping hot, with high-fat butter made from Petaluma cow milk.

"We picked the rolls up from back in history because we saw a way to make them taste better with fresh milled flour-with fire," he says. At $12, they're a bargain; Skenes says they lose money on the butter.

There are two origin stories for the widespread adoption of the Parker House roll. The first comes from the Parker House Hotel that opened in Boston in 1854. Allegedly, a rankled baker tossed a batch of unfinished rolls into the oven. They came out with a distinct shape, a light interior, and a buttery exterior.

Food historian Ken Albala credits efficiency as one reason the roll took off: "The Parker House was simply a more efficient delivery system for white bread. It's more compact, fits in a basket, and is easier to butter."

An additional story comes via another baker, L.B. Willoughby, who had the idea to sell fresh biscuit dough to consumers. In 1932, he patented his method for processing and packaging the unbaked dough in a pressurized can. Willoughby's patent was eventually acquired by Pillsbury, which introduced the seminal canned crescent rolls to the world in 1965; they continue to be its best seller.

"When I grew up in Hingham, Mass., it was the only bread we had," says chef Chris Bleidorn, owner of Birdsong in San Francisco.

Although Bleidorn points to the Pillsbury version as his inspiration, he didn't embrace Parker House rolls for nostalgia. "We do it because it's efficient," he says-and as an unconventional showcase for the restaurant's open flame cooking.

His straightforward yeast-leavened recipe is hard to bungle. After being pre-baked, the rolls are finished over an open fire and then brushed with boar fat, honey butter, or seaweed butter. "The fire gives it rustic qualities where you might get burnt ends, or smoke hangs on to the fat that you brush on. You get a really special experience," says Bleidorn.

In New York, Crown Shy pastry chef Renata Ameni also began baking Parker House rolls for the experiential aspect. "We wanted something that was communal. I like the idea of breaking bread," says chef-owner James Kent, so they settled on the special bread with a singular shape. The Crown Shy version arrives warm, stuffed with a three-olive blend-green, cured, and Kalamata-plus capers, roasted garlic, parsley, and lemon zest. Instead of a butter accompaniment, guests are given labneh yogurt spread.

Unlike most of the current crop of premium Parker House rolls, Crown Shy's are complimentary. "When restaurants sell the bread, maybe only 10% of customers will buy it. It's not usually worth it for a restaurant," says Kent. The good will of a free snack, though, is invaluable.

Mitchell Davis, cookbook author and executive vice president of the James Beard Foundation, sees the rolls as Exhibit A in the casualization of fine dining and chefs' desires to upgrade homey foods. It's "a huge switch," he said, from the dense, dark bread that's been popular. He notes that it also makes retro sense: In the '70s, one of the hallmarks of a fancy place was the hot bread.

"I want to take a humble food, and make it discussed as seriously as a black truffle," says San Diego chef William Bradley, who serves a Parker House roll "course" midway through his 10-course, $270 tasting menu at Michelin-starred Addison. The rolls come with three types of butter churned in-house: clover, fleur de sel, and fines herbes.

For Bradley, who doesn't have the space to devote to an entire bread program, the rolls make sense. "It's a simple technique, it isn't labor intensive, and the results are great."

The Parker House movement is wide enough to embrace special diets as well.

At Le Jardinier in New York, baker Tetsuya Yamaguchi spent five months perfecting a gluten-free version. Yamaguchi uses a blend of Japanese rice flour and sorghum flour, plus a special mold that allows the roll's outside to get caramelized. Yamaguchi initially described the rolls to staff as "mini pain de mie." But, he says, "the team started describing them as Parker House rolls once we opened, because more people recognize the name, and they like them."