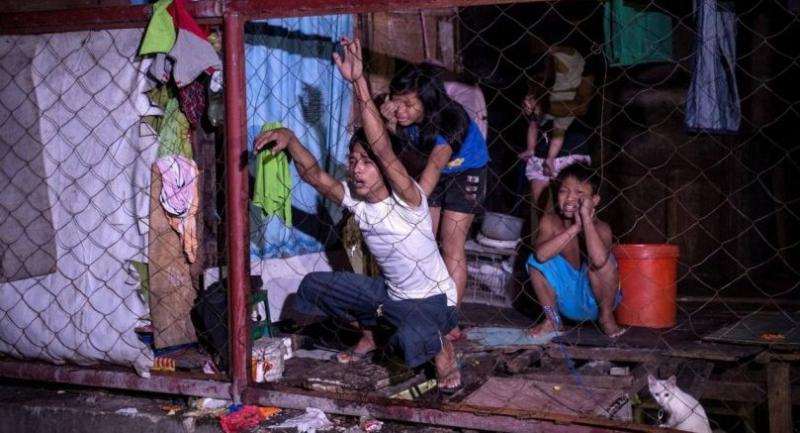 Relatives cry as coroners carry away the body of an alleged drug dealer, killed during a police operation in Manila.

A little-known feature of the Philippines’ war on drugs is the enlisting of local residents as “police assets” for the purpose of identifying drug suspects. This practice resurrects a dread figure from the nation’s traumatic past – the traitor who betrays his own neighbours, typically wearing a bayong (a native bag woven from leaves) to conceal his face, his cowardly eyes peeping through a pair of holes as he points to the individuals on the wanted list.

In the final year of Japan’s occupation of the Philippines, this deplorable character – the grim personification of terror in a war-torn society that had lost its moral moorings – was called the “Makapili”. The term is a contraction of “Makabayang Kalipunan ng mga Pilipino” (Patriotic League of Filipinos), the name of a pro-Japanese organisation founded by the nationalist poet Benigno Ramos.

The Makapili was, in the words of Ramos, “the creation of the Filipinos for the Filipinos in order to suppress disorder, to awaken the misguided elements, to ameliorate the food problems of the people, and to aid the Imperial Japanese forces and other Asian nations in the successful prosecution of the war”. Mostly drawn from the ranks of the poor and least educated, the Makapilis carried in their hearts the conviction they were fighting to free the country from the clutches of American imperial power. They were boosted in this belief by the fact that among their leaders were veterans of the 1896 revolution and the Philippine-American War, namely Emilio Aguinaldo and Artemio Ricarte.

But this meant that their enemy included the vast majority of Filipino patriots who fought the Japanese invasion as guerrillas. The guerrillas carried the burden of prosecuting the war against the Japanese occupying army while awaiting the return of American forces. It was a complex period, in which it was not always easy to tell who was friend and who was foe. Nothing was more frightening than being exposed by an insider who had been recruited by the Japanese enemy. That loathsome role belonged to the Makapili.

Later, as the dust of the war began to settle, the task of settling scores focused on the enemy within who had ruthlessly betrayed fellow Filipinos.

Today, the same outcome threatens when our latest “war” finally comes to an end. Some people may forgive the wrongs that were done to them, but they will never forget the treachery of neighbours that led to violent death and suffering.

This visceral fear of reprisal has begun to shape the contours of the government’s anti-drug war. With the campaign’s success increasingly being measured by the number of bullet-riddled dead bodies in dark alleys, rather than the number of arrests, masked police teams have begun a policy of recruiting members from outside the community in which they operate.

There is an intrinsic disadvantage to deploying police killers who are strangers to the community. They come equipped with a list of names, but they need local informants or assets to put faces to those names.

My brother, Bishop Pablo David of the Diocese of Kalookan, where most of the recent drug-related killings, including that of Kian Loyd delos Santos, have occurred, strongly suspects that the 17-year-old Kian was killed for no other reason than his refusal to serve as a Makapili for the police death squad that came to his neighbourhood that fateful evening. Kian was not on the police list of drug suspects. The police took him from his family’s convenience store as he was closing shop for the night. They likely thought that, as store minder, Kian would know most everyone in the neighbourhood. As they pulled him out of the store, they didn’t expect him to panic and resist. And so they shot him.

Others who have been recruited on the spot for the same purpose know better what to do under the circumstances. Bishop Ambo has sent me a revealing photo taken surreptitiously in his diocese, with the following explanation: “Here is a photograph of a group of able-bodied bonnet-clad men walking through a slum alley. With them are two younger looking boys who seem visibly nervous. One struggles to keep his mask in place, his grey T-shirt all drenched in sweat. They must have been ‘picked up’ too and pressured to come along and cooperate if they wanted to stay alive. All they had to do was to identify the persons the group was after. They must have been instructed to keep their faces covered too so they would remain anonymous.

“One can read horror in the downcast eyes of the boy in white T-shirt. … Look closely at the picture. Who would not be horrified to perform such a task? In a way, the fate of the victims might be better than theirs. They would survive this ordeal but these kids would forever be haunted by the anguished faces of the victims they had helped identify. They would see them in their nightmares begging for pity before being shot in the head.”