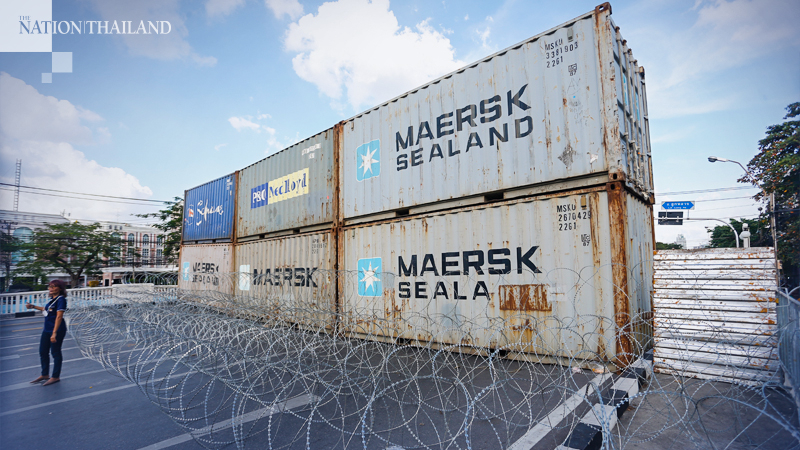 Police erected a barrier of razor wire and shipping containers to prevent a rally at the Crown Property Bureau, so protesters switched their focus to the Siam Commercial Bank headquarters on November 25.

By Wichit Chaitrong
The Nation/ Analysis

Flooding and Covid-19 have exposed serious flaws in national security under the government of PM Prayut Chan-o-cha this year.

The deep faults in national security strategy are highlighted by the mismanagement of tax funds and the handling of youth-led protesters under Prayut’s leadership.

The prime minister is again under fire after Covid infections spiked over last weekend. Migrant workers from Myanmar, especially illegal immigrants, are the suspected source of the outbreak, which centred on a Samut Sakhon seafood market and saw cases jump by over 500 last Saturday.

Observers have criticised the government’s failure to monitor migrant workers and crack down on migrant-trafficking gangs at the border, despite setting up the Centre for Covid-19 Situation Administration (CCSA).

Instead of using them to prevent illegal entry by migrants from Covid-ravaged neighbouring countries, the government has deployed border police to keep an eye on protesters during major street rallies in the last few months.

Bangkok police in November and December also barricaded roads with razor wire and shipping containers, in a move ridiculed as overkill by observers.

Some pointed out that the razor wire barriers could be used more productively at borders to prevent virus-infected smugglers sneaking into the country.

The excessive response to peaceful student-led protests that began in July eventually turned violent when the government imposed an emergency decree and police fired water cannon and teargas to clear the gatherings. Royalist counter-protests were also mobilised against the pro-democracy movement, leading to violent clashes.

In a desperate bid to crush protests calling for Prayut to step down, a new Constitution and monarchy reform, police have lately applied the draconian lese majeste law against dozens of protesters, including a 16-year-old child.

The United Nations High Commission for Human Rights criticised the government for using Section 112 – which carries jail sentences of up to 15 years – against demonstrators exercising their internationally recognised right to protest peacefully.

The government defended its actions as “protecting national security”. However, the Covid-19 surge suggests Prayut’s administration has a warped view of national security priorities that has weakened Thailand by shifting human and financial resources to counter protesters rather than the virus. If Prayut and his inner-circle were genuinely focused on the nation’s security, they would have allocated more personnel and budget to combating Covid-19 instead of wasting human and financial resources on countering peaceful protests. More evidence of misplaced priorities came with the Bt54 million in tax money spent by the Royal Thai Air Force to renovate a toilet on its VVIP jet-liner.

The government also fared badly in efforts to combat severe flooding which hit almost 1 million people in the South this year. Prayut’s administration prioritised combat of a different sort, spending billions on military hardware including a submarine, despite the absence of threats – marine or otherwise – from foreign powers. The budget choices were more proof of misplaced national security priorities among Prayut and his military top brass.

Academics duly called on the government to abandon a national security strategy rooted in the military-establishment alliance.

Surachart Bamrungsuk, a political science professor at Chulalongkorn University, urged the government to cancel its 20-year national strategy – a legacy of the post-coup junta – warning the plan would quickly be rendered obsolete by the fast-changing global and local landscape. He observed that the national strategy was a political tool designed to entrench the military's role in government following the March 2019 general election. Hence it was not capable of addressing the country's current problems, he added.

The impact of Covid-19 had severely damaged the country's economy and competitiveness. The unforeseen crisis had rendered the 20-year national strategy worthless, Surachart wrote in a comment piece headlined “Is the 20-year National Strategy relevant post-Covid 19?” published by the Nation Thailand in April.

Meanwhile Thailand is officially becoming an ageing society. Protecting national security now means finding ways to boost productivity of the younger generation, since they are the ones who will have to pay off the huge public debt built up by this generation. The youngsters will need to shoulder the growing burden of caring for the aged. The priority now is to upgrade the quality of education to support this young generation. There is also an urgent need to strengthen key institutions, especially the political and judicial systems that mediate conflicts in society. However, the government has ignored this need, instead exploiting those institutions as weapons to combat younger generations and their demands for national reform and genuine democracy.

Prayut and his Cabinet have branded pro-democracy protesters as youthful troublemakers. The reality is that many in the older generation back their calls for national reform. Former prime minister Anand Panyarachun has expressed support for amendment of the lese majeste law. Business leader Banyong Pongpanich has backed monarchy reform, suggesting that Thailand should return to the benchmark set by King Rama IX. The previous monarch did not take control of two Army regiments in Bangkok, nor did he have direct control over the Crown Property Bureau.

It has become obvious that the youth-led democracy movement wants “rule of law” as the solid ground on which Thailand can develop in the 21st century. This is the priority that all stakeholders in the country can agree on. The youth are already determined to achieve it in their lifetime, but the current government has rewarded their efforts with charges of sedition and lese majeste. Unfortunately, Prayut and his old alliance are still at a loss over the true identity of national security. The New Year is the right time for them and the whole country to reflect on this issue.